When you start the game up you’re treated to a beautiful animated introduction cinematic with excellent music. It’s not that animated intros are uncommon in Japanese RPGs, but be prepared to sit through the intro every time you boot the game. You’ll want to watch it that many times. It’s that good. The game is however plauged with a few unskippable cut-scenes before boss fights. 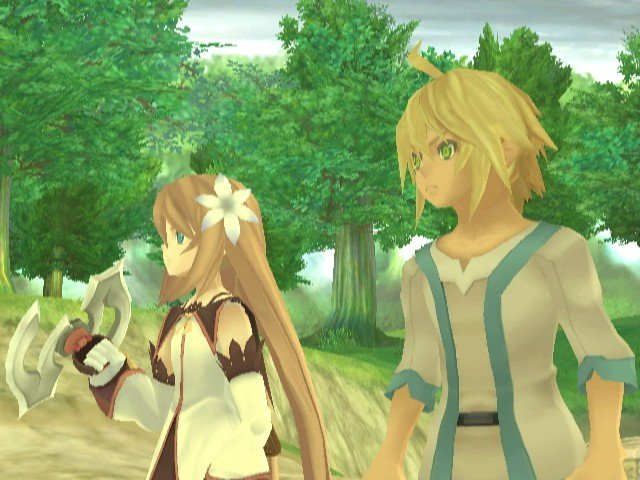 The game begins in Luin, a village that was attacked and set ablaze in the original Tales of Symphonia, and was later restored if you took the time to do a side quest. The side quest turns out to be a canon truth in the sequel as the town is completely restored. The village features statues of the original heroes including Lloyd Irving, the main protagonist of the Tales of Symphonia and all-around nice fellow.

As shown in the opening cutscene, Lloyd has been doing some naughty things in Palmacosta. He murders the new main protagonist’s parents. The new protagonist’s name is Emil . . . and you’re going to hate him for at least 75% of the game.

Emil treats “I’m sorry” as a catch phrase during the first 15 minutes of the game. It seems cute at first, but it quickly ramps up on the aggravation scale. It made me want to turn off the console, and sob the rest of the night in a corner over what this sequel seemed to be.

But the review must go on.

The story is strictly for fans, if you haven’t played through Tales of Symphonia on the Gamecube, you’ll be lost. You spend most of your time meeting up with familiar faces and, unfortunately, most of them have lost their original voice actors. With the exception of Collette, Regal and Presea I felt all the characters were poorly recreated and don’t seem like their old selves.

While the story wanes, the gameplay is where ToS:DotNW shines. Combat makes use of the “Linear Motion Battle System” the series is known for. If you’ve never experienced a Tales game before, it plays similarly to a fighting game with real time movement and actions. You are able to control one character at a time, but you’re still free to issue commands out to the remaining party members.

A few improvements have been made to the combat system over the original like moving in full 3D space around the battlefield which was first introduced in 2006’s Tales of the Abyss. The combat system also includes elemental attributes and “Mystic Artes” which can be pulled off once the unison attack bar is filled up entirely. 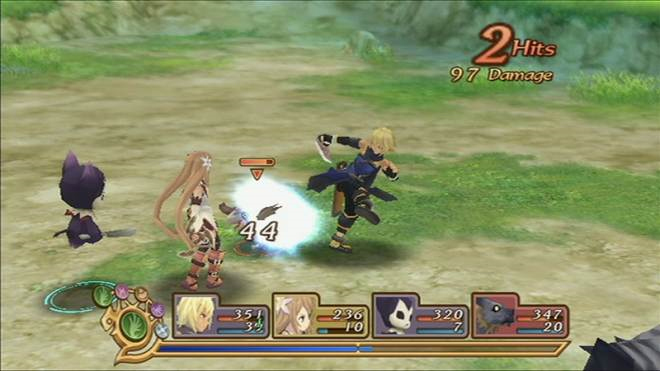 The biggest new addition is the ability to capture defeated monsters and add them to your party. The monsters are able to level up and learn new abilities; however they are exclusively under the CPU’s control. You can eventually sign your monsters up for tournaments to win gald (the Tales series’ currency) and special items.

Tales of Symphonia: Dawn of the New World does include a local multiplayer option. Your friends need to be a little patient, however. Since they can’t control individual characters in the non-combat environments, they’ll be sitting with nothing to do until you encounter a monster.

ToS:DotNW will last 20-25 hours. This seems short but there’s no overworld to explore. It’s 20 + hours of solid gameplay. Capturing monsters can add a bit of extended play value after you finish the game if that’s your cup of tea.

In the end, Tales is just a decent JRPG but right now it is definitely the best Japanese RPG you’ll find on the Nintendo Wii. The voice acting can be downright awful at times, the new characters are annoying, and the story is a mess, but the combat is fun. If you’re a newcomer to the series give it a try. If you’re a fan of the original like me, don’t buy it. It’s a very disappointing continuation of a great game and will most likely leave you unsatisfied at the end.