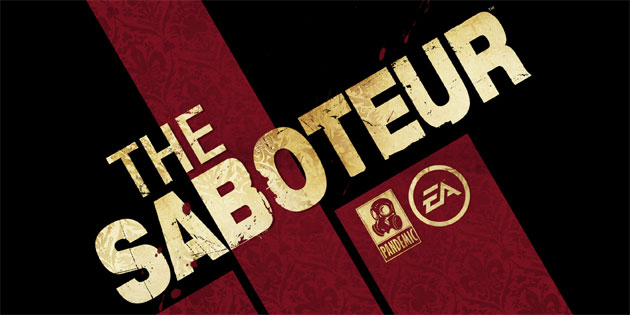 Pandemic Studios recently closed their doors, with their last game being released with little fanfare in early December.  The Saboteur puts you in the role of an Irish member of the French resistance in Nazi occupied Paris and while the game isn’t horrible or unplayable, it fails to rise above other recent releases in terms of overall quality.

The first two things you see when beginning a new game are a Parisian stripper’s perfectly rendered breasts as she does a seductive dance to a club of Nazi officers. As Sean Devlin, you sit at the bar drowning your sorrows when a Frenchman approaches you about performing some sabotage for the Resistance.

What ensues is an adventure of modest length firmly rooted in Hollywood depictions of the war.  Characters are little more than cultural archetypes (the erudite and deep-thinking Frenchman, the insane and sadistic German scientist, the boozehound and initially uncaring Irishman) and the plot is adequate but the way it is all presented makes it seem more original than it truly is. 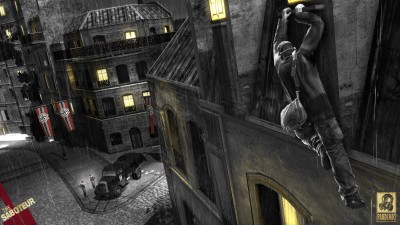 Almost every building in Paris can be scaled.

Gameplay, sadly, fails to impress.  You’re given the entirety of Paris and the surrounding area plus a German bordertown to roam around in and for the most part, Sean navigates over all obstacles without much of a problem.  However, the climbing mechanics aren’t as finely hewn as the ones seen in Assassins Creed II or InFamous, just as the driving mechanics aren’t as well implemented as in Grand Theft Auto IV.  Shooting is handled adequately, especially in light of the broken stealth gameplay.

Although ‘broken’ might be a bit of a strong word; the stealth is functional to a degree, but compared to Batman: Arkham Asylum, Metal Gear Solid 4, or even Assassin’s Creed II, it falls short.  Fortunately, the game compensates by having some of the dumbest Nazi’s you’ll ever encounter.  While a General and some heavy soldiers can prove to be somewhat of a challenge if you’re spotted, the average footsoldier can be lured away from his comrades simply by drawing your pistol and hiding it before his ‘Suspicion Meter’ fills up.  Stealthily dispatching an enemy without drawing blood will allow you to use his clothes as a disguise and at this point, you can attack a base without ever being discovered.

But killing Nazis is only half of the gameplay; you’ll spend most of your time tracking down Nazi sniper nests or fuel depots and blowing them to kingdom come.  Everything you destroy earns you ‘Contraband,’ which can be used to purchase weapons, ammunition, and vehicles on the black market.  And should you be low on funds, an armed Nazi soldier is never far off and any car can be stolen. 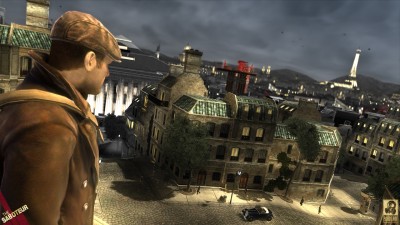 The game world is quite extensive, as well.

Graphically, the game distinguishes itself by having Nazi occupied areas displayed in black & white with only yellow lights and Nazi reds showing up.  As you whittle away at the Nazi influence, color slowly bleeds back into the city of Paris and the contrast between the bright lights of a freed street and the oppressive nature of one under Nazi control is definitely one of the highlights of the game.

The radio and bars/clubs play period music and your home base, a strip club called ‘The Belle,’ is populated by dozens of topless and similarly clad women of ill repute.  Although you’ll need to purchase and redeem the ‘Midnight Show’ DLC for if you want the strippers to bare all–otherwise they’ll be forever wearing lingerie.  Those who buy the game before the end of the year will be given a free ticket to the ‘Midnight Show.’

In the end, The Saboteur has little to stand on.  The atmosphere of oppression and the feeling of resistance is certainly unique and it’s always fun to kill Nazis, but gameplay-wise, there’s a better alternative for every aspect.  Fans of film noir, World War II films, or 1940’s French culture in general might want to rent it, but at the current price of $59.99, a purchase would be ill-advised considering what came out in November and what’s coming out in January.

7 thoughts on “The Saboteur Review”