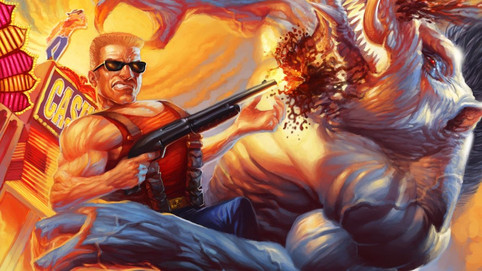 The sex gods at File Planet have surprised the world by using their necromancy stats on 3D Realms and coming away with the demonstration build of the long awaited Duke Nukem Forever. The latest in the line of TPS-FPS-RTS-TSA-FUBAR-Knitting Simulators has been anticipated for well over a millennium since the previous Duke Nukem game (Duke Nukem Has a Chat with a Mormon Child) was released and became an unheard-of success, winning 24,601 Game of the Year Awards and somehow being responsible for the founding of Greenland. New gamers approaching the franchise for the first time in their Karmic Life-Cycle are recommended to put a thin layer of nail polish around their gaming space in order to achieve the full effect of the game’s 16-D technology.

Duke Nukem Forever is anticipated for a Rocktober 34th, 2016…498762 release date for the Playstation 3, Xbox 360, Nintendo Super-Famicom, PC, and Gizmondo. The Special Edition is expected to come packed with the cure for testicular cancer and a two-disc soundtrack.