[Author’s Note: No media was allowed inside the Project Natal event, so all attached media are from the official Microsoft press kit offered at the show’s end.] 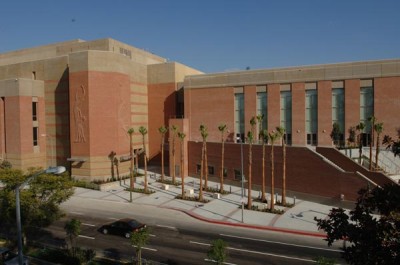 For those of you not aware of the size of the University of Southern California’s campus, please let this small fact help you towards understanding: the 5,000-seat Galen Center is just one of their gyms. The number seems relatively small to be throwing during the arena-packing Fifa World Cup, but one rarely realizes just how many people that is until you see how far down the street the entrance line goes. A couple of blocks of one of LA’s most famous and busy streets were cordoned off and police monitored to keep order. 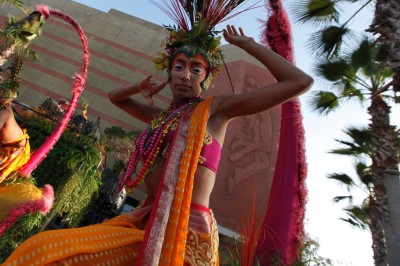 Paying my cab, it took me crossing three streets just to maneuver around the mob. Stepping onto the curb, I noticed that both Tomonobu Itagaki and Hideo Kojima were 10 feet away from me, casually chattering with a orbiting mass of spectators and interviewers. E3 started for me at that exact second. After not being found in the server (thanks a lot, Randy!), both Dane (another of our E3 team here at Elder-Geek, whom I met up with in line) and I were regulated to the waitlist line that curved around the building’s dumpster alley-side. But through an odd bit of luck, ten minutes before the start of Microsoft’s Project Natal Experience (as imagined by Cirque du Soleil), the waitlist line moved and the Xbox people ran out of wristbands only one person after we were given ours.

As we flashed our seriously awesome wristbands (holographic with barcodes) and marched our way into Galen’s main entrance, we were greeted by a rush of tropical decor and tribal drummers on raised platforms, hinting at the Cirque du Soleil trademarked quasi-homoerotic wonder that waited for us inside. Filing through a series of curtains, we arrived at a row of tables holding what looked like clear trash bags. A business-like voice and a hand to the back told each of us to “go put on our ponchos,” and as several uncomfortable visions passed through our heads, Dane and I obliged. A bag check later, we were ushered through a whole in the wall, and suddenly Geoff Keighley of GTTV was walking towards me and gesturing to a stunt family, apparently we were part of an advertisement for two seconds. 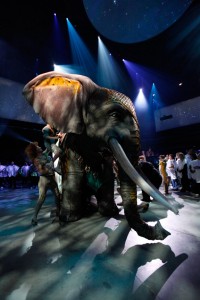 More back-pushes and we arrived in the grand Galen stadium. As the stands were already full, Dane, myself, and the rest of the waitlist crew made up the stadium’s floor, standing around in a giant crowd that unfortunately never became a mosh pit. The rectangle stadium’s longer sides held giant panel screens, featuring a lush jungle screen with various Xbox Avatars appearing and making small interactions with each other. Fake vines and brush littered each entrance, above which a drum platform and small lighting rig was placed. Towards the back end of the stadium a prop couch was set, a family of actors being ushered in and slowly raised to the ceiling as we took our spots in the audience. In the front of the room was an ascending series of three boulders leading up to a giant screen. Standing on the lowest boulder was a poising Cirque performer, dressed in attire that reminded many in the crowd of Rafiki from The Lion King. A half hour of playing “guess the accent” of the press people around us, the lights dimmed, and Tribal Trance began booming from speakers.

Three smaller screens lowered before the stadium’s giant one, and the Cirque troupe marched onto the floor amongst us in multiple processions. A few stayed and provoked the crowd by dancing and generally attacking odd, while most glided to the back of the stadium, coaxing the boy from the actor family in the back to leave the couch and grab a squishy green ball. After the ball had been passed, the boy was raised on the shoulders of the troupe and lead to the Rafiki-esque gentleman, a couple members of the audience grabbed along the way to join the troupe at the smallest boulder. A duo of anomatronic elephants were then rode into the stadium, their haunches showing a slideshow of technology’s history as an announcer spoken of “history being rewritten” and a “new age of innovation” dawning. Another young boy was atop one of the elephants, who was then brought down by the troupe and pushed to the top of the smallest boulder. The trance echoed through the floor at our feet as the boy was raised up the boulder to stand in front of the first screen.

Pulling a 360 controller from his satchel, he played along to a trio of pre-recorded game footage before ascending to the one giant screen, where he put his controller away and was faced with a giant avatar version of himself. Miming a couple arm and leg raises, the screen then greeted (in a manner totally not resembling Hal from 2001: A Space Odyssey) him, the boy’s response being to ask the screen’s name. And in the response, the name Project Natal was ironically killed, and the official retail name of Microsoft’s motion control setup was assembled before us: Kinect. 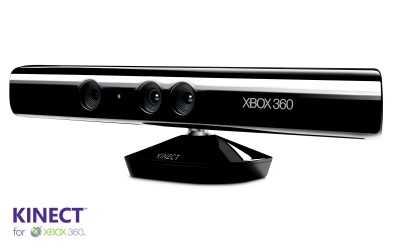 What followed was less of a Cirque du Soleil experience than a standard press briefing. The screen flipped and was torn to reveal a living room set, a family happily bounding about in expectation of using the motion control device. The set would occasionally rotate, leading to some cool gravitational effects of the family being in the couch upside down. The troupe littered themselves amongst the boulders and acted as the event’s Greek Chorus, whooping and applauding at all the necessary junctures. Occasionally, the lighting would fluctuate across the room, which would make the shoulder-pads in our ponchos glow a certain color to match the in-house effects (turns out not wetness was required.) What would follow for the final portion of the event was a series of gameplay videos unfolding in the center of the stadium and mirrored on the paneled screens to the sides. 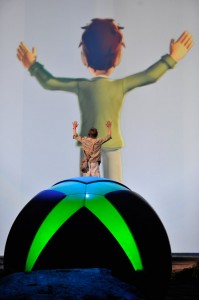 Each family member took center stage to demo a game, which ran the gamut from trick-based racing (both track and rapids) titles to a very Wii Fit-style Ta-Chi, to an Eyepet/Nintendogs-esque Pet simulator. In each the screens would flip between or show simultaneously the pre-played footage and reaction shots of the family, always set against the ambient techno choir of Cirque du Soleil. The show also revealed voice chat through Kinect’s camera, and the controller-less menu surfing hinted at since the motion control setup’s reveal last year. Of particular interest to the audience at hand were two titles: a dance title and a Star Wars action game. The first, shown through a tutorial level that ran through basic dance moves, was received in house with a bit of smirk, murmured jokes audible from all sides of the stadium. The latter sucked the room dry of breath, the action scene unfolding with an unnamed Jedi character force-flinging hangar doors open and letting loose his lightsaber to block the laser blasts (and slice open) of a platoon of Stormtroopers before coming face to face with Darth Vader himself. Of all the IP shown at the event, the Star Wars title was the only one to receive noticeable applause not coming from Microsoft’s own audio.

The media blitz concluded with a multi-part Olympic Sports compilation, with the family competing in a Boys vs. Girls tournament match in hurdles, javelin throws, soccer, and sprints, among others. Aside from some odd score data fluctuating on the screens, the events were supplemented by a jubilant announcer and an in-engine crowd of Avatars, whose enthusiasm was reflected with other families of actors integrating themselves into the stands to cheer on the noticeably inactive stadium audience. After the family completed its round of gameplay and the screen flipped a few more times for added measure, the boy who began the event with his controller was wired and flew into the air in celebration. The Cirque troupe broke out into dance and carried the boy back to his parents, this time carrying a glowing orb contained within a larger sphere. The paneled side screens lowered to reveal smaller compartments housing other actor families, the whole cast joining into the dance.

The event wrapped, and media kits were handed out, each containing a plushie version of one of the animals showcased in the pet simulator bearing a tag with an input code boasting a “Fall 2010” release date, indicating that all shown IP will release as a Kinect launch title. As lumbering as they moved in, the masses dispersed to the sidewalk outside the Center to update their websites and to the shuttles to return to hotels. With a jungle drum and techno beat, Microsoft had thrown its biggest E3 card into the pot, and only time will tell how the rest of the companies present, and the show itself, will react.