For almost a month now, we’ve been testing Rosewill’s 5.1 Channel Vibrating Gaming Headset. To be perfectly honest, upon first hearing about a vibrating headset, we thought it was a bit gimmicky, but after only a few minutes with the headphones, they quickly became one of our favorite pieces of PC gaming gear.

Appearance-wise, these headphones are typical of Rosewill form. They’re chunky and not the easiest things on the eyes. Luckily, they go over your ears instead. They’re solid black except for the red ring on the outside ear cup and the blue LED-lit control panel located in the unit’s incredibly roomy 8-foot cable, giving you plenty of freedom to scoot around your office or gaming center. 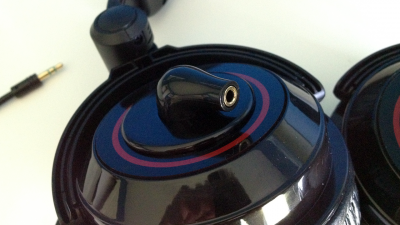 But the Vibrating Headset isn’t about style. It’s about performance. For their meagre price tag, they are nothing short of a powerhouse. The highs come in extra clear, the bass is extra deep, and the 5.1 audio sound quality will absolutely knock your socks off… and that’s without turning on the vibration feature. The headset comes with simple to install drivers that will allow you to enable a virtual 7.1, but for us, the 5.1 was more than enough to make a difference in our audio experience.

But let’s talk about the vibration feature. Afterall, that’s what truly makes these headphones stand out from the competition. It is, without a doubt, an experience that must be felt to be believed. Once enabled, the vibration has two different settings which are controlled by the switch on the cable. The vibration itself is triggered by super deep bass sounds like explosions, gunfire, and of course, drop d tuned guitars.

PC gamers don’t always have the benefit of vibrating controllers. Without a doubt, this is a comparable experience that is actually more immersive. Dragons roar with feeling, motorcycles rumble appropriately, and of course, explosions give you a lovely kick when they go off nearby. While playing music, the headset mimics the feeling of being at a live concert as the sound of the bass rumbles through your chest.

In terms of comfort, the headset is moderately comfortable and weighs in just under a pound which might feel a bit heavy to some. The ear cuffs are light and soft enough to wear for hours on end without feeling like your head is in a vice or that your ears are too warm. (On a personal note, I always wear my glasses. The first week of wear with the cuffs was slightly awkward, but after some usage, the padding gave in a bit and now they’re much, much more comfortable.)

Despite being a gaming headset, the microphone quality is very good. None of our teammates ever complained about background noise, staticky transmissions, or the like. And for the sake of fairness, this video review is being recorded using the headset’s microphone so you know exactly what it is capable of. 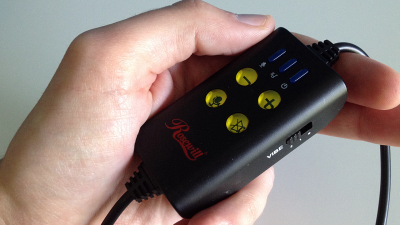 Mute, silence, volume control and vibration control are all accessible from the control box on the headset’s cord.

But not all gamers are online gamers. Online multiplayer is fantastic, but sometimes you want to immerse yourself into a single player world, and for that, you never ever need a microphone. Have no fear, Rosewill is here with an incredibly clever detachable microphone that plugs into a standard 3.5mm jack built right into the set, so you only need to look like a Time Life operator when you have to. That little feature won big points in our book.

Aside from the less-than-sexy appearance, our only complaint about this headset is that the vibration feature can sometimes only be felt when the volume is a bit high for our personal tastes. Otherwise, we are giddy at the concept of developers integrating headset vibration into future games, but that is less than likely.

But well it is all said and done, we can wholeheartedly recommend the Rosewill RHTS-8206 5.1 Channel Vibrating Gaming Headset for full-priced purchase, especially at the absolutely bargain MSRP of $59.99. They are perfect for late or crowded room gaming fests without distrubing your neighbors. These headphones are game changers.