At Elder-Geek we consider ourselves pretty big fans of stealth games, being veterans of the genre since its origin in the original Caslte Wolfenstein. So when we heard about Shank developer Klei Entertainment’s submission into the genre with Mark of the Ninja, we became understandably excited.

At the start of the game, you’ve just been chosen as the champion of the Hisomu ninja clan, a title which comes with quite a few perks. A special ink is tattooed into your skin granting you mystical powers including heightened senses, short range teleportation, and superhuman strength. After the clan’s sacred base is attacked by mercenaries, your master sends you on a quest to avenge your fallen brethren and remove the threat to the clan. 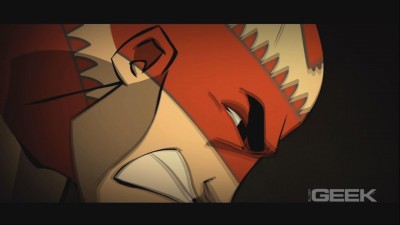 The story is told mostly through in-game voice logs, animated cutscenes as well as conversations between you and a female ninja who will periodically appear to aid you on your mission. The story itself is forgettable at best. It’s told through effective means but is almost unpredictable in its predictability. That said, the animated cut-scenes ending each act are pretty cool looking, something that helps mitigate the narrative issues.

Unlike many modern stealth titles, Mark of the Ninja takes place in a two-dimensional world. All the levels are bathed in a hefty helping of darkness, which combined with the gorgeous cartoon art-style makes Mark of the Ninja quite the looker. Sadly Klei Entertainment’s choice of visual-style seems to be a double edged sword. As all the levels are almost excessively dark meaning that any significant visual variety is hard to find. Due to this we found the game to be a little hard to stomach during longer play sessions, as looking at a mostly black screen for hours of a time gets old quickly. 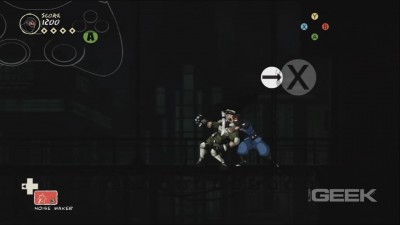 Despite its graphical issues, Mark of the Ninja’s excellent stealth gameplay redeems the game. It’s been a long time since we’ve played a stealth game with such expertly crafted levels and scenarios. Sure, the first couple of acts in the game are a little on the easy side, but the game delivers plenty of different ways to kill or evade your enemies, making it easy to forgive such foibles.

You’ll be assassinating enemies from hiding spots like ventilation shafts, plants, chandeliers, or by outflanking them. Initially you may find yourself repeating the same patterns to take down your foes, but as the game gets progressively harder, you’ll be forced to utilize your constantly-expanding arsenal of gadgets and abilities, along with some quick reflexes and clever thinking. You can continue to refine your assassination abilities once you’ve completed the game by playing through the new game+ mode, which we cannot understate our love for.

Aiding your quest for slaughter are the obligatory ninja skills of climbing walls, grappling to safety, and crawling through tight spaces. This makes you far more mobile than most stealth game protagonists, something Klei has utilized to great effect in the level design; making every room a puzzle. 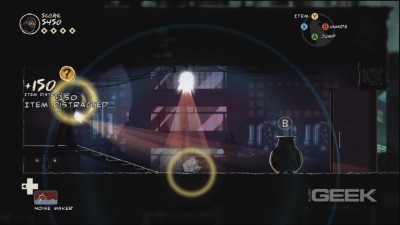 Mark of the Ninja has one of the best player feedback systems we’ve ever seen. Light sources turn your character into a more colorful version of himself, indicating your visibility. Sounds make visual ripples on the screen indicating where enemies are walking or how far loud noises travel. When enemies are startled, yellow rings will appear where the enemy was when he was alerted, and what he was alerted to. You might think that all this would become hectic during certain situations, but it works so well that we were never caught off guard or felt overwhelmed.

Mark of the Ninja is surprisingly long. We spent almost 10 hours on our first playthrough, only to be sucked right back in by the increased challenge and reward of the new game+ mode. Padding the length of the game even more are excellent hidden challenge rooms that utilize the game’s platforming mechanics in interesting new ways. Despite the excellent gameplay, however, we do have to fault the game a bit for its lackluster story and repetitive art-design. It’s a shame that the greatness of Mark of the Ninja is being held back by these trivial issues, but when all is said and done we still got to play a fantastic game with a great length and a considerable amount of replayability. Just when it felt like developers had nearly forgotten about the stealth genre, we were pleasantly surprised by this meaty downloadable adventure.

Name: Mark of the Ninja