Due to the nature and the complexity of the story of the Assassin’s Creed saga, this video review may contain spoilers. In order to review the game fairly, we need to speak freely about all aspects of the game. However, we have done our best to keep spoilers to a minimum. Thank you in advance.

With the bad taste of Assassin’s Creed: Revelations still in our mouths, it was hard to get excited about Assassin’s Creed 3 or to believe some of the promises the game made before release. A bigger new world, a better story, refined controls, and more immersive gameplay were all promised. Of course, you’d have to be living under a rock to not know about Assassin’s Creed 3’s release. Ubisoft has been spamming commercials on most major American networks for months now, and new trailers and developer diaries seemed to be released almost every week into online gaming communities. It goes without saying, almost everyone has had high expectations for Assassin’s Creed 3 especially considering it is the most-preordered game in Ubisoft’s long history of making video games, and it has had the longest development cycle since the original Assassin’s Creed.

Inside the Animus, players mostly control Connor–the Assassin with Mohawk and British descent–during the events of the American Revolution against the British. Connor is one of the most eclectic Assassins within the series, and because of it, his tale is a rather interesting one to see unfurl. Without the luxury of being born into a family of Assassins with preset ideals, the bastard son born in war sees the defining lines blur between what is right and wrong, father and teacher, friend and family, peace and war, and of course Assassin and Templar, all the while never having his personal moralities shaken. This conflict makes Connor one of the most identifiable protagonists in the series. 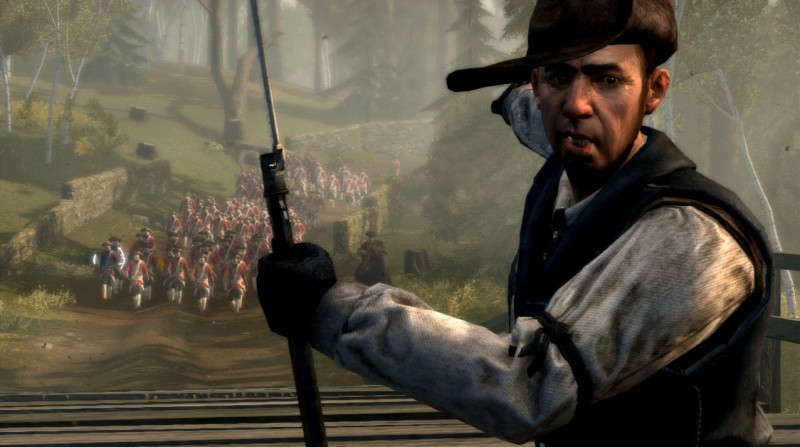 During Connor’s adventure, players will participate in some of the United States’ defining moments including Paul Revere’s midnight ride, the Battle of Lexington and Concord, and the Boston Tea Party. Of course, gamers also interact with some of the nation’s founding fathers like Samuel Adams and George Washington. Connor also dips slightly into American folklore, exploring the existence of Bigfoot, the headless horseman, and more. History fans might cringe at some of the liberties taken for the sake of entertainment, however it is a video game where you play as an assassin tapping into his ancestor’s memory through his DNA using a magical computer. Disbelief needs to be suspended from the moment the game is powered up.

That’s not to say the story is bad. Far from it. In fact, this is one of the better Assassin’s Creed storylines both inside and outside the Animus. Some real thought and care has been put into Connor’s story to make him as human as possible.

Outside the Animus, Ubisoft has finally decided to push the ball forward with Desmond’s story and the over-arching evils that he faces. Fans of the series so far will not be disappointed with the revelations found here. Newcomers, however, may be feel a little lost and we can recommend catching up via wiki pages and synopsis videos. 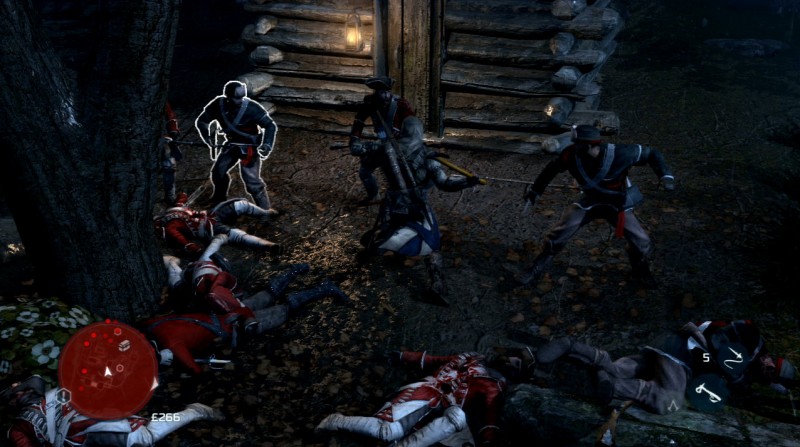 Environmentally, the world of AC3 is huge. The maps are so large, gamers will easily become lost within New York, Boston, the frontier or anywhere else in between. The frontier is pocked with massive hills, giant scalable cliff sides and flowing streams, while New York and Boston are adorned with period specific houses and buildings. But it’s not just open dead space, there are plenty of side missions to partake in, collectibles to be found, animals to be hunted, and secrets to unlock along the way. In fact, we completed the single player portion of the game after putting in 25 hours, but there is still plenty left for us to experience trying to get full synchronization of every mission, and collect every single item possible.

Combat, while visually impressive, still needs work and it’s about time that Ubisoft listens to the concerns of a growing number of its fans. Connor is the most brutal of all the assassins, invoking a wide variety of attacks and counter kills. They are fluidly animated, and quite frankly, it is candy for the eyes to watch Connor dispatch a gang of his foes.

But the problem with Assassin’s Creed 3’s combat is not in the animation, or the weapon variety, or the combat moves. The counter-attack and counter-kill system in combination with Connor’s gigantic lifebar make the protagonist completely overpowered right from the start. We can count on one hand the number of times we died from a direct combat encounter. The solution to this problem is criminally simple and only raises curiosity why Ubisoft doesn’t have this age-old system in place.

We would give almost anything for a hardcore mode where Connor can only take 2 hits before death, where fall damage can kill from more realistic heights, where health doesn’t regenerate at Wolverine speeds, and where enemies don’t have a large indicator over the top of their heads, signaling when they are about to attack. This would force gamers to use the series’ other impressive, but completely underutilized mechanic: escaping and hiding. As it is, even against an entire enemy-controlled fort, Connor is never outnumbered. 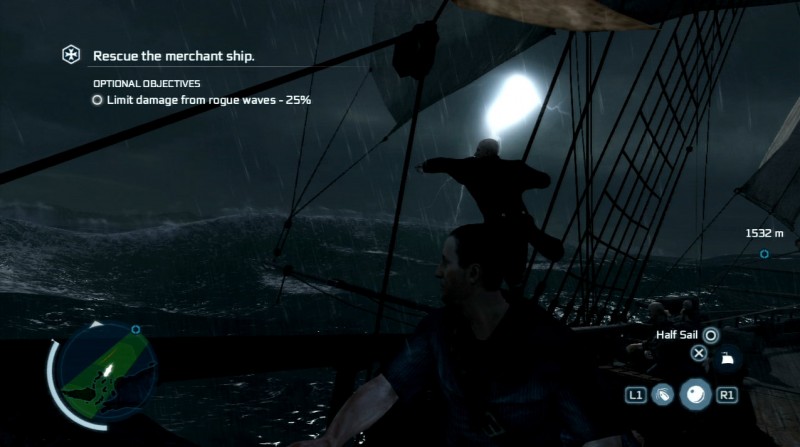 The visuals in Assassin’s Creed 3 are a sizable improvement over its predecessors. The character models are very impressive showing off amazing facial and clothing detail. The color palette is vibrant, and we loved the rich dark shadows the game didn’t shy away from using. The seasonal, weather, and and day night cycles are absolutely impressive. More open-world action games should consider following suit.

The Assassin recruits and the citizen factions have been blended into one multi-purposed bunch, a change that we enjoyed. You no longer hire a group of thieves to distract guards, or find a pay courtesans to walk among.  Now when you recruit Assassins to your cause after liberating entire portions of cities from Templar control, each Assassin will come with a particular special ability like creating blendable groups, or distracting guards. It is a nice change from past Assassin’s Creed titles, fits the storyline better, gives each assassin a personality, and it prevents the player from spamming the “call assassins” button. They are, however, still a little overpowered.

We welcomed with open arms the shop changes within the game. You no longer need to find a tailor, an armorer and a doctor. You can now do all your shopping in a one-stop general store. Thankfully, there is no need for buying new gauntlets and chest pieces for your armor. And most weapons, while some may be slightly better statistically from one another, are purely there for cosmetic purposes.

Once again, there is a manor mini-story that brings home management back into play and through it, you can craft new items for Connor.

Gamers afraid of deep, open waters, might want to close their eyes and hope for the best in Assassin’s Creed 3’s ship missions on Connor’s ship Aquila. Graphically, these sections are superb, not only taking you to exotic locations, but it is where mother mother nature rears her ugly side.

While this may be the most ambitious of the Assassin’s Creeds, this is also the glitchiest at launch. We’ve fallen through the earth countless times. We’ve had characters speak to us without moving lips. We’ve seen a carriage act in a manner very unbecoming of a carriage. There is also a noticeable drop in framerate while running and jumping through the crowded streets. There is even inconsistencies within the description text for some of their mini games. Needless to say, a massive performance patch is needed. None of these issues break the game, but they are more than disturbing. 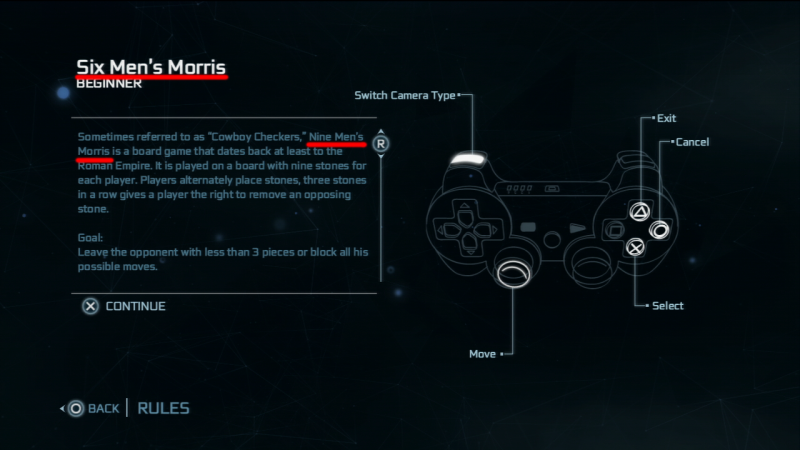 The soundtrack by Lorne Balfe has a few memorable tunes and blends the historical setting well with all the characters involved in the game, adding to the immersion.

Our largest issue with Assassin’s Creed 3 is the overall pacing. We appreciate the scale the game is trying to convey during the early portions, but it took us 5 ½ hours before we first put on the traditional white assassin uniform. It felt criminally long in Assassin’s Creed 2, and this is even worse. The story that is told is fine, but the tutorial is heavy handed. We started to wonder if Ubisoft forgot who was on the cover of their own box. Other segments of the main campaign felt like they sent you to a completely different territory just to pad out the experience, but the amount of content between the two points, and the ability to quicktravel certainly helped turn that frown upside down… a little.

Assassin’s Creed 3 is definitely a step back in the right direction for the Assassin’s Creed series. Certainly, there are some glitches that will cause some giggles, and the main character is completely overpowered, but that doesn’t stop it from being fun… very fun. Its new inspirational roots in Red Dead Redemption and Batman: Arkham City are pretty clear. And though we fault the main story for being padded, we are still drooling at the amount of content jammed into this package. From beginning to end, we were hooked on AC3. Open world gamers will find dozens of hours of gameplay even without touching the multiplayer. The storyline is a strong asset to AC3. Fans won’t be disappointed, and we are anxious to dive back into the game to give it another round. But the series desperately needs a hardcore mode.

Ubisoft, let us put our own hood up or down.