Following numerous rumors and leaks,Ubisoft has officially announced Assassin’s Creed 4: Black Flag. Along with the official box art for the game, Ubisoft released this statement: “We confirm that Ubisoft will announce all the details of Assassin’s Creed IV Black Flag on Monday March 4th at 5pm GMT.” After this announcement however, the game’s release date may have also been leaked, according to a website (see below) which reportedly hosted the game’s premiere trailer. Not only does the website state the release date as October 29th, but says the game is “also coming to next-gen consoles”. 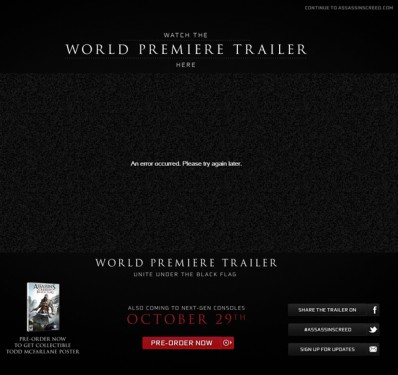 Details previously rumored about the game suggest that Black Flag will be set in the Caribbean in 1715. Ubisoft has confirmed the game will be on Xbox 360, Wii U, PC, PS3, the latter version containing an exclusive 60 minutes of gameplay.