My wife and I are always looking for the next great video game to play with each other. I can’t stand television too much and she doesn’t care for some of the more “hardcore” games that I play. Some of the big hits have been Rock Band, Rock Band 2, Castle Crashers, Pixel Junk: Eden, Bioshock, Assassin’s Creed, and Pain. Trivial Pursuit will not make our favorites list… not by a long shot.

As we tore open our gamefly envelope, we were both a little giddy with anticipation. It was board game night once again but none of the set up or cleanup! No arguing over the rules! No accusations of one person cheating at the game! No one stealing from the monopoly bank when the other person has their head turned to tending to the dog who is whining to go outside! All we had to do was pop in the game, get some snacks, pour myself a beer, grab a glass of wine for the wife and we were ready for a good time.

At first, things didn’t seem to go too badly. We both noticed that our Miis weren’t used on the game board. Our characters were very Mii-like so we were both confused why we couldn’t just import our Miis. We got past that. 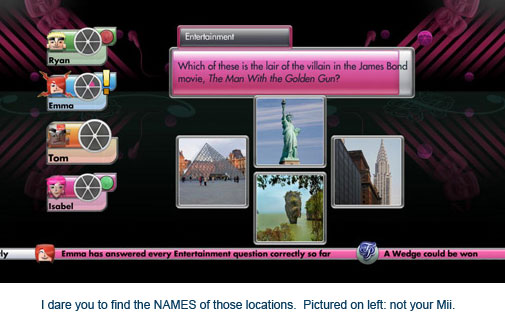 The control scheme for Trivial Pursuit was dead on. Flick your wrist to roll the dice. Point your remote to the multiple choice answer and voila!

I’m not a lazy man by any stretch of the imagination. Like many of you, I voluntarily juggle two jobs to make ends meet (not to mention I’m our site maintenance man until we can afford a better web solution). But when I rented Trivial Pursuit, a simple board game that’s been in existence since 1979 and played it on one of the most technologically advanced gaming systems available on the market; I expected to have the questions read to me. Why? Because if I played the old-fashioned version of the game, my WIFE would be reading the questions to me. Why couldn’t they come up with a text-reading system? I would have settled for one of the voices from monk-e-mail. Instead they put the time into having the announcer say really lame comments after you correctly answer a question like “You are one smart dude! What did you eat for breakfast? Smart dude food?”

I had the pleasure of hearing that horrible phrase TWICE in a row.

Anyway… the announcer was really only the beginning of our problems with Trivial Pursuit. We started to notice a pretty distinct pattern in the types of questions the game asked us. I’m not joking when I say this: the game had an unnatural amount questions and answers about Indiana Jones, M. Night Shyamalan movies, and Dr. Pepper. By the end of our time spent with TP we joked that “when in doubt, guess The Sixth Sense.” It would even ask us inappropriate questions for certain categories!

For the “science” piece of the pie, my question was: “What city was The Sixth Sense set in?” And then, instead of giving me a multiple choice of city names, it gave me a map of the United States (with no state lines drawn) and it highlighted Boston, Philadelphia, New York and one other US city. The circle denoting each city was so large that Philadelphia and New York covered a greater part of New Jersey… it did NOT actually NAME those cities.

I felt my answer choices were better suited to the question “location Philadelphia on the map.” Hell, even if you believe in ghosts, the question didn’t fit the category even slightly!

We thought it might have been a fluke, but later the game asked us to locate the setting of Indiana Jones and the Kingdom of the Crystal Skull. Once again… science cataogory!

One final frustration was with the answering system itself. The game never labels its answers when showing a map or pictures. Much like it didn’t label the cities in my Sixth Sense question, it didn’t label my images when displaying archeological locations. I was asked “which of these places has over 23,000 labeled artifacts.” Despite my on again / off again relationship with anthropology and National Geographic, surprisingly I didn’t recognize any of my choices! I wanted to know the answer! Not only was my guess wrong, but when they displayed the correct answer, they only showed the picture! They never named the location!

How was I supposed to learn? 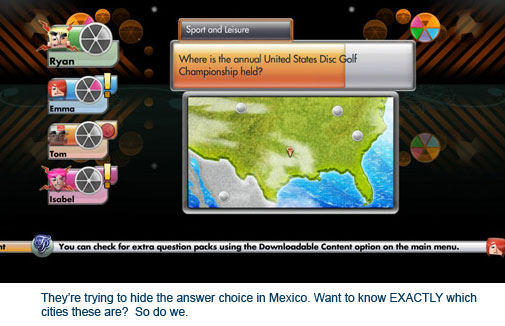 This foresight is a pretty big one in my book. How do they expect to market this as a family quiz game when the kids playing it are only going to walk away knowing more about movie locations and Dr. Pepper?