I was excited to play FUEL, and if you know me and my gaming habits, you’d have been surprised.  The fact is that I don’t much like strict racing games.  If it’s well designed, I can enjoy it, but nowadays they only make ‘simulators’ as opposed to ‘games.’  This applies to every other sport as well.  Call me crazy, but I’d rather enjoy some Cruis’n USA than play Gran Turismo 5 Prologue.  But FUEL was the exception. 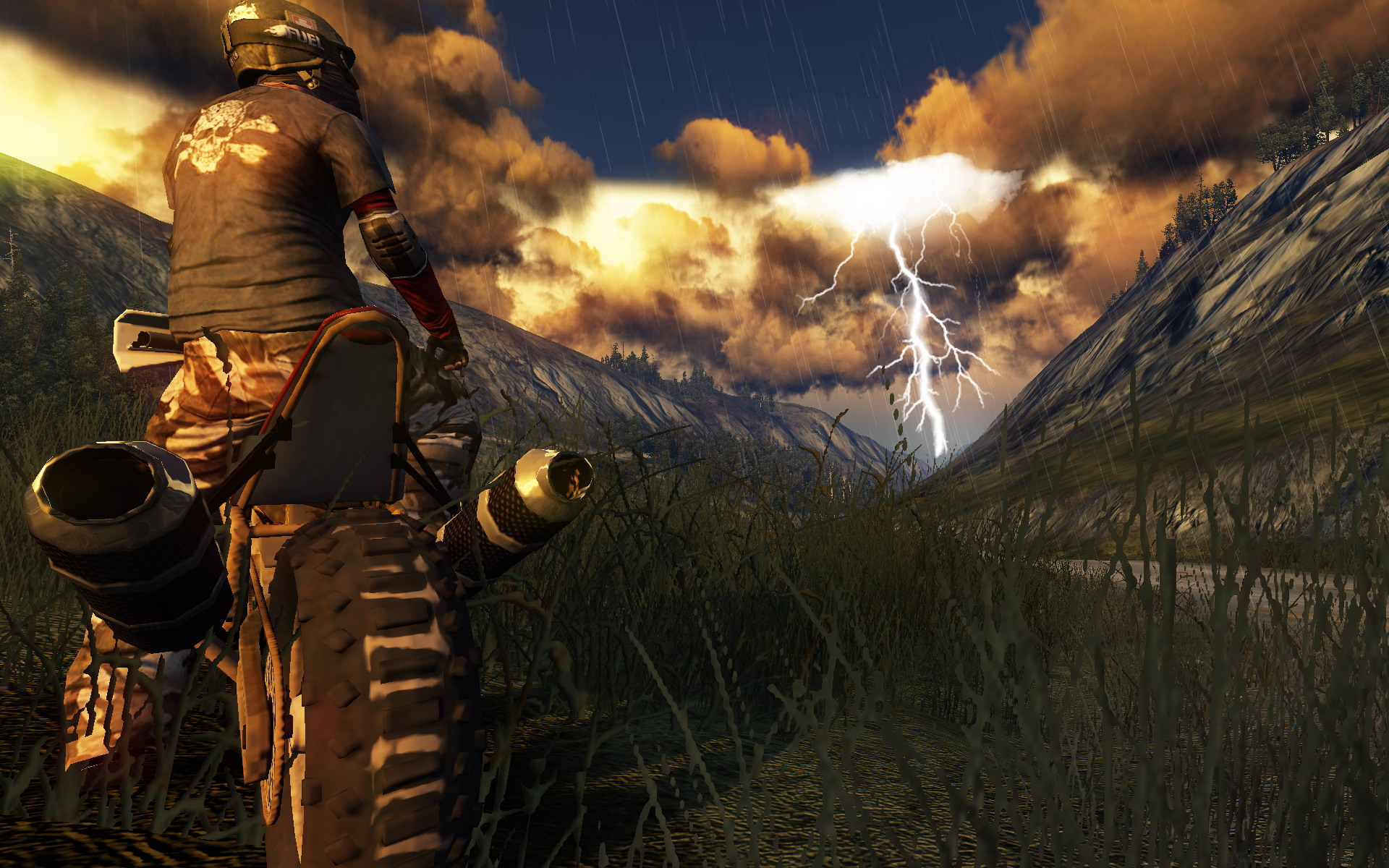 Set in a future when the world has been ravaged by global warming, probably because of the hundreds of ATV’s, SUV’s, trucks, motorbikes, and muscle cars that never run out of gas, the world of FUEL is something to behold.  With 5,560 square miles of open terrain that won Asobo Studios a Guinness World Record for largest game world, the chances of you seeing even half of it are slim to none because you’ll grow tired of it after a few days.

I felt some sort of obligation to see if the map really was that big so I decided to drive from one end to the other.  Two hours later, I had completed my task and was convinced that the world was too big.  It’s that kind of big where you can drive for 20 minutes and be surprised when you’ve only moved a fraction of an inch on your map.  Even if you use the Heliports you’ll still be forced to drive for a long time.
The largest game world is fun for a bit but, like the largest cookie, it gets stale before you have a chance to really bite into it and explore.  FUEL went stale even faster because I encountered nothing of interest during my two hour trek. 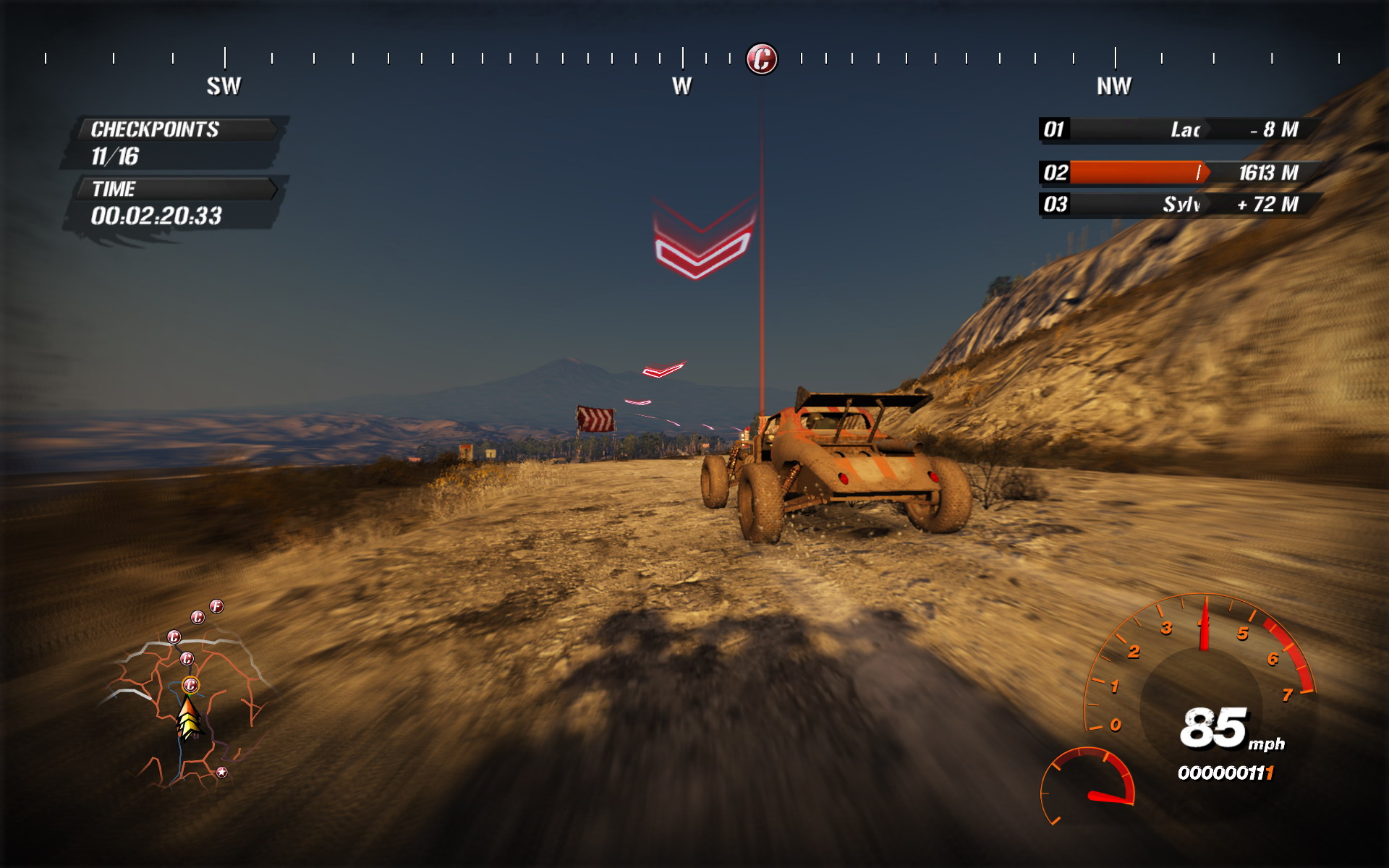 So what is there to do in this massive wasteland?  Aside from the races…not much.  The gargantuan world is, fortunately, divided into smaller areas called ‘Camps,’ each with a handful of races that take advantage of any interesting physical feature found in that area.  So you get to race through the Grand Canyon or across the remains of the Golden Gate Bridge and for the most part, it’s really fun.  Most of the 75 vehicles control quite well but your choice is always limited to a vehicle class when participating in races.

Completing races on one of the three difficulties awards you with a star and fuel, the in-game currency, multiplied by two or three depending on the difficulty you chose.  Fuel is an indispensable resource seeing as it’s the main way to acquire new vehicles, a necessary expenditure if you want to win the later races.  As you earn stars, new areas become unlocked.  You can drive anywhere at any time, but ‘unlocking’ an area will allow you to take part in races in that area.

On to the first glaring oversight: if you don’t come in first, you fail.  Rather than employ a simple system where 3rd place gets you one star, 2nd gets you two, and 1st gets you three along with increasing amounts of fuel rewards, the game forces you to purchase the best vehicles as soon as you can because without them, you’ll never win any of the later races.  This decision seems to have been completely arbitrary and is especially infuriating when a simple mistake puts you in 2nd place because in the end, you might as well have been in 8th. 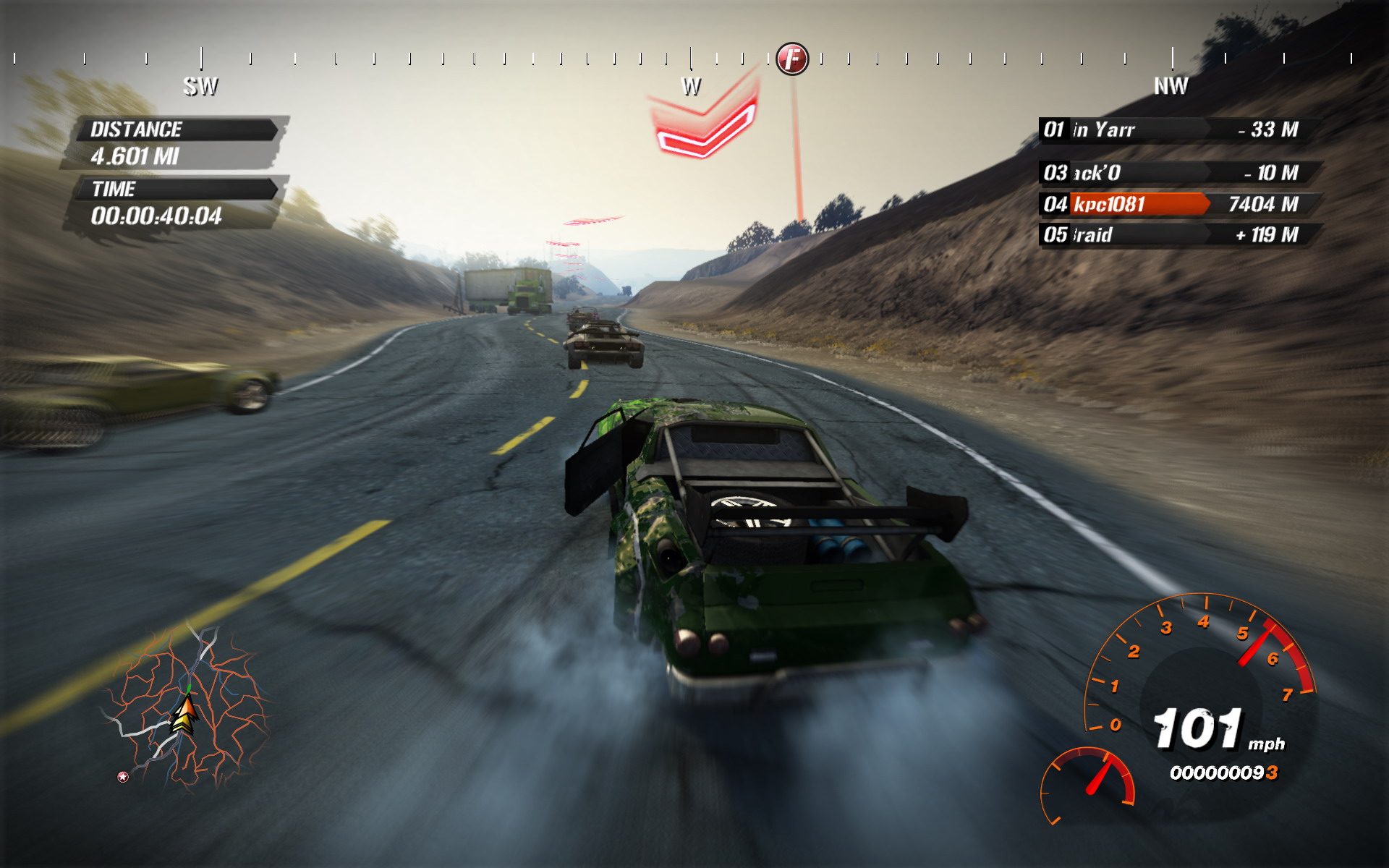 Skill will only take you so far because hitting anything can potentially put you in last in a matter of seconds.  At no time is this more apparent than during forest races because the hit detection where trees are concerned is questionable at best.  When striking an obstacle, be it a tree or an opponent, you’ll either crash with the game respawning you a few feet back, be catapulted into the air, or just stop.

These kinds of glitches occur far too frequently and in a genre where flow is integral to performance, it’s even more aggravating.  Playing FUEL will have you actively avoiding opponents a few races in because trying to drive them off the road or perform a PIT maneuver will hurt your progress just as much if not more.  It goes against every instinct I have, something that’s been cultivated by hours of playing Grand Theft Auto and Burnout.

The main attraction of the races is the fact that there are no course boundaries.  In Checkpoint Races, you can cut corners and do many things that traditional racers wouldn’t allow.  Then there are A to B Races, which leave it up to you to choose the route.  For those of us who are indecisive, the game has a ‘smart GPS’ which produces translucent red chevrons in front of you, guiding you along the path of least resistance.  Occasionally, the game can steer you wrong, but a loading screen made special mention to not rely on the GPS and instead use instinct. 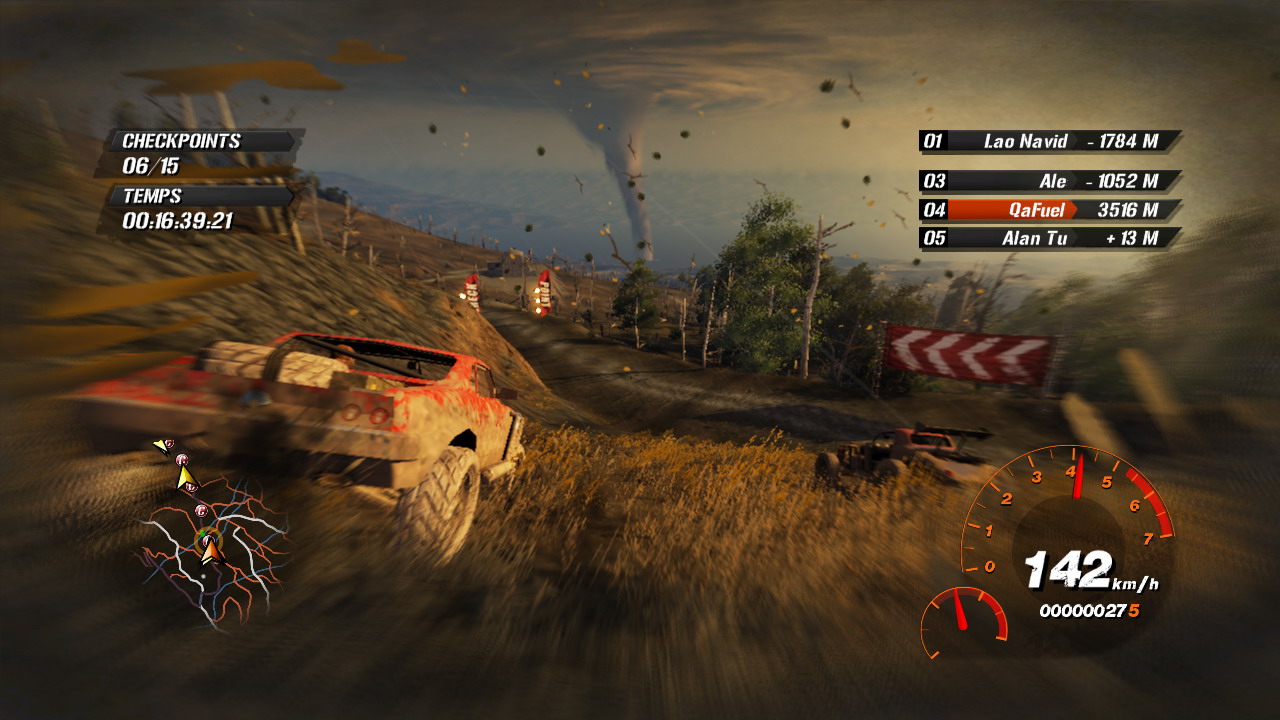 There are, of course, the requisite collection tasks but they amount to nothing more than boring paint jobs, an occasional vehicle, and ‘Vistas,’ which are areas meant to show off the impressive game world.  There are challenges as well but in the end, it’s all racing.  You can also create your own races along the roads in areas you’ve unlocked but this feature, which transports you to the starting line, can be exploited for quick travel seeing as quitting the race leaves you in the same location.

Technically, the game is extremely impressive.  The fact that there is such a large world populated by dozens of vehicles along with vegetation and other scenery is mind-boggling.  Although extended play will reveal how this is accomplished without load screens: all of the grass and smaller foliage are sprite-based like the characters in Doom or Wolfenstein 3D.  But it’s not something you’ll notice when tearing through the countryside at 100 miles per hour.

Another annoying feature of the terrain is the way jumps are constructed.  During your travels, you’ll encounter many barns or derelict buildings with conveniently collapsed roofs that are perfect for jumps.  Unfortunately, the best jump I’ve encountered was designed by a dim-witted rhesus monkey because there’s a smaller jump *right* before the huge ramp, making it impossible to clear the obstacle because your speed is wasted on the little jump which, more often than not, has you landing awkwardly on the big jump.

In terms of graphics, the game looks like you’d expect it to look.  The weather effects range from adequate to amazing with races through canyons of tornadoes or hurricane level thunderstorms being incredibly exhilarating.  The game also boasts a full day and night cycle, but whenever the day ends, it’s like someone flicked a switch.  You can actually see the sun disappear one second to be replaced by the moon the next.  Vehicles don’t show damage at all, but they do show mud, dust, and sand very well. 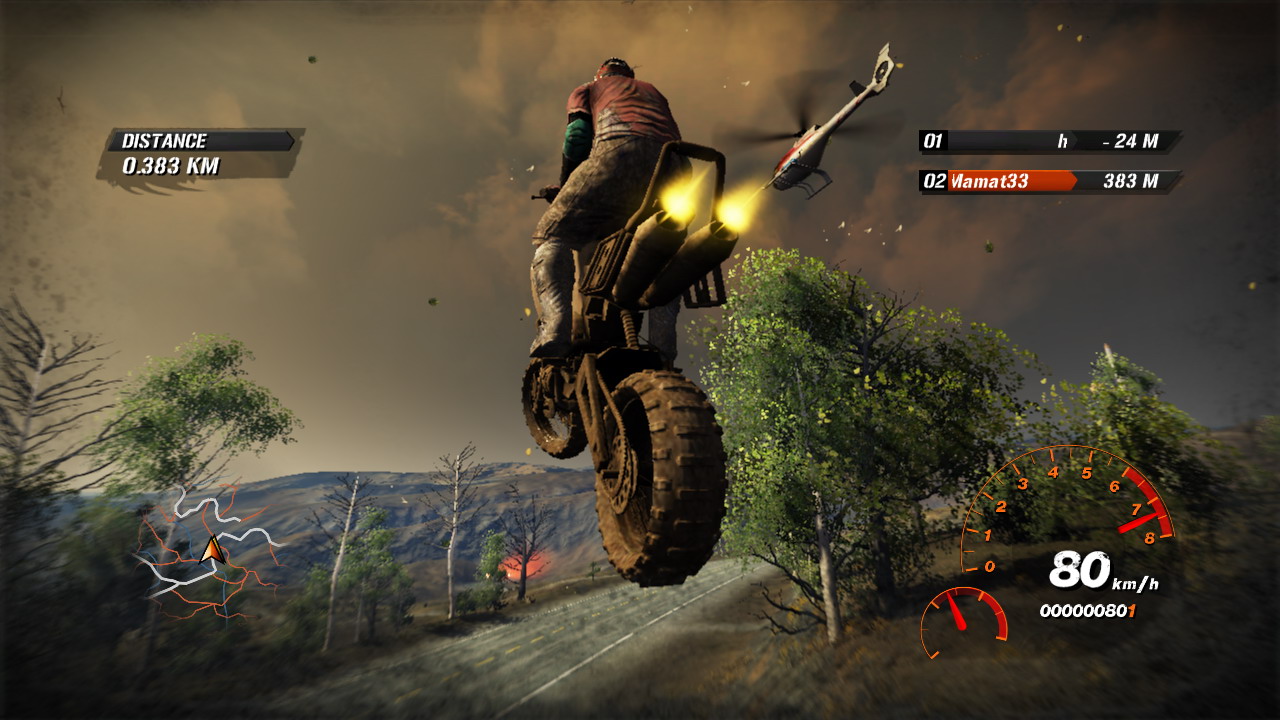 And if you read that last paragraph thinking that you can just turn up the music, think again because the music is horrible, striking a generic chord in a way you only thought elevator music could.  Considering the fact that the entire game is driving, it baffles me that there isn’t any licensed music or, better yet, there isn’t a feature to stream music from your hard drive.

There are also some smaller things that I can complain about—acceleration is mapped to the R2 button and extended play can make your finger quite tired seeing as the resistance on the triggers far surpass that of the face buttons.  I’d think that it would be commonplace to have fully customizable controls by now.  I’m nitpicking now, but I have one final thing to add: the lettering on the spine of the box reads from bottom to top unlike every other box in the history of video games.  Not only does it defy all logic but it makes my PS3 collection look weird.

If the size of the game world intrigues you or if you are even remotely entertained by racing games, I suggest renting this one.  It’s worth it just to race alongside a tornado and if you can find enough racers online, it can be very fun.  There’s a fair amount of good stuff in FUEL, but considering the size of the game, it’s definitely not enough.

ESRB: Rating: E for Everyone