Less than 24 hours after retailer HMV.com made pre-orders for the Call of Duty: Modern Warfare 2 Prestige Edition available, the offer has already been removed from the website stating that it is no longer available. This is most likely due to the massive demand for the collectors edition of what many gamers have already named the ‘most anticipated game of the year’.

The Prestige Edition, as Infinity Ward and publisher Activision refer to this collectors edition, will include the ‘regular’ Limited Edition of the game but will also contain a fully functional set of night vision goggles. HMV.com, having the exclusive rights for the Prestige Edition in the United Kingdom had priced the set at £120, which equals roughly $195. Despite the fact that the supply of this edition was severly limited, customers were allowed to pre-order 3 copies of the Prestige Edition.

The regular version of Modern Warfare 2 and the ‘Hardened’ (Limited) edition are still available for pre-order in the United Kingdom. 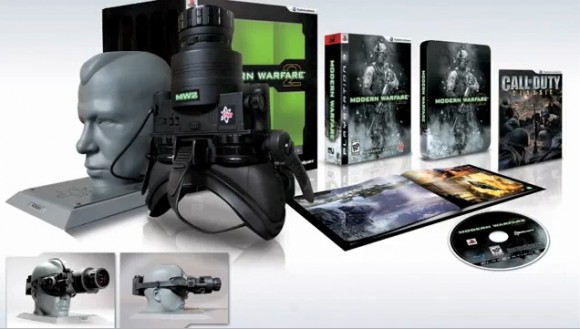 The Prestige Edition of Modern Warfare 2 is set to include a fully-functional set of night vision goggles, an art book, a free-download-code for the first Call of Duty, as well as the 'regular' limited edition version of the game.