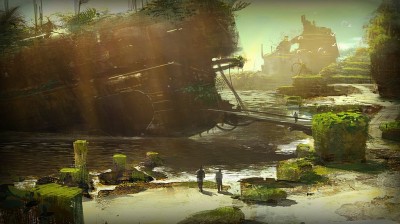 Even before Bioware’s massive pulp action RPG Mass Effect 2 sales, the combination of 30 selected reviews let Metacritic declare the title the 2nd highest rated game on Microsoft’s Xbox 360, behind only Grand Theft Auto IV (98%). The sci-fi opera shares the silver medal (96%) with Valve’s Orange Box and 2K’s original Bioshock. The flood of new reviews since Mass Effect 2‘s coronation hasn’t yet dethroned it, although review-accumulation sites like Metacritic have come under consistent fire for their lack of transparency on review selection processes.

Part of the game’s success has been the arguably unprecedented scope of the game’s narrative, a subject that will become the main talking point of a panel Bioware will be hosting at the upcoming Game Developer’s Conference in San Francisco. Armando Troisi, Bioware’s lead cinematic designer, will present Get Your Game out of My Movie! Interactive Storytelling in Mass Effect 2, which also features guest speakers like Ubisoft’s Patrick Plourde, who will discuss the design of Assassin’s Creed II, the audio in Forza Motorsport 3, and shader techniques in Left 4 Dead 2.

The panel will “focus on the narrative design fundamentals used at BioWare and how they evolved for Mass Effect 2. Troisi will also “explore components of the game’s story design, problems encountered during implementation and design choices made for the product.” The panel description adds, “One of the major themes of the session will be theoretical and practical application of interactivity storytelling in a modern video game. We will also explore a variety of methods and best practices used to harness, focus and shape this powerful narrative component into your next product.”