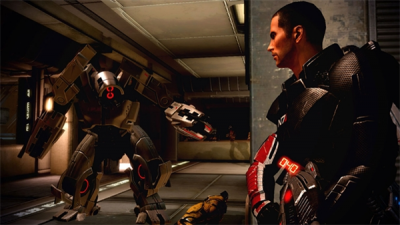 The recently released DLC for Mass Effect 2 may have acted as a hint for a more complex batch of content that could be coming to Bioware’s galaxy. Those logged into the Cererbus Network, the game’s unique download hub, received a new wall of scrolling text in the “news” feed that listed a story on a new sentient race, the mysterious “raloi”, had been accepted into the intergalatic community. One of the game’s NPCs also spoke a line on their being “Hundreds of races” within the game’s open world known as Citadel Space. While the Cerberus Network has released several humorous stories, most recently concerning the Super Bowl, but with their proposal of consistent DLC support, the raloi could be what gamers can expect to either be fighting for or against in Mass Effect 2.

What do we think? Will the raloi be a new race to play around with in ME2? What would they look/act like? Or is this just meant as a story? Give us your feedback below!

One thought on “Rumor: New Race Coming to Mass Effect 2?”