Author’s Note: The staff at Elder-Geek would like to extend specific thanks to Dave Pellas of High Voltage Software, our site’s personal contact within the company at this year’s E3 expo. 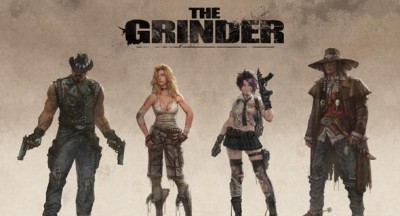 After breaking its exclusivity on Nintendo’s Wii, High Voltage Software’s The Grinder was announced at this year’s Game Developer’s Conference to have gone through significant changes for its PS3, Xbox 360, and PC version. The Wii version will retain its first-person zombie blasting style, while those picking up the title on other platforms will be treated to a top-down shooter in the same zombie-destroying vein. The Grinder on everything-but-the-Wii is built with multiplayer suites in mind, the four character-spread and level layout reminiscent of hack-and-slashers like Baldur’s Gate: Dark Alliance. Only on-couch and online multiplayer options were confirmed at the show, with more to be revealed in the coming months. The game demonstrated at E3 was still alpha build, but the team at High Voltage were more than happy to expand on what we can expect closer to the hopeful release date of Halloween 2011.

Tangible within the first seconds of cutscene is the game’s reveling of Grind-house cinema, the ultra-cheap exploitation cinema style that populated urban movie palaces and drive-in theaters throughout the late 60s and 70s. The playable cast is split between four equally ripe film stereotypes: Mexican bounty hunter Hector, underground monster doctor-cum-hunter Doc, bored Japanese assassin Miko, and the badass urban fighter with a past known as AJ. The team is rounded up by a mysterious organization going by the contact “Book,” charged with stemming (and investigating) a massive infestation of a B-movie rogue’s gallery, from werewolves to vampires to the ever-fun-to-destroy zombies. 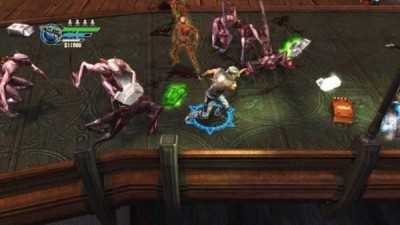 But the Grind-house aesthetic doesn’t just extend to the purposefully paper-thin plot. Our demo took us through several stages within a ramshackle mine, populated by masses of undead and the occasional demi-boss werewolf. Beyond the shifting film filters and projector effects that occasionally popped up through our playthrough, the game felt drenched with the same lenient appreciation of physics that made the z-grade exploitation films so deliriously enjoyable. Enemies explode in grotesque cartoon-sized bursts of blood and bits, combustible barrels carry approximately 100 times their possible blast radius, and the omnipresent announcer reeks of an overwrought Southern accent as he chews on the scenery like a brick of Velveeta.

In terms of actual action, the game feels less like the Smash TV comparisons its top-down nature will receive, and more of an arcade shooter like Contra. Weapons came in a tiered-hierarchy, and quickly became one of the major talking points of the producers present in the room. Progressively more bad-ass death-dealers were dropped from the teeming masses of foes me and the other three players downed in classic feeling bullet hail-fire; with my Doc nabbing a spread-shot, grenade-like projectile, and ray gun as the demo went on. Various melee weapons like swords were also available for when ammo was low, and everything (we are told) had multiple upgraded forms to unlock as they were used. 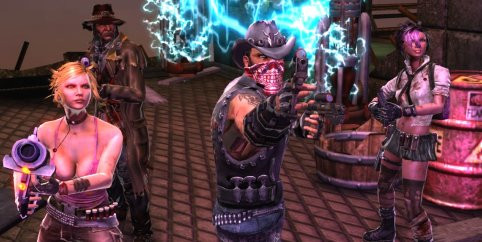 Anyone who has played at least one top-down shooter/hack-and-slash can play through this demo on muscle memory alone. The formula was proudly on display: a series of blocked rooms only unlocked after the defeat of the baddies present within, and separated by a bit of narration/feedback from the Grind-house announcer. Various points in the environment could be exploited for extra damage, and the larger baddies contained a God of War-like prompt when beat up enough to merit a special fatal attack, usually resulting in a beheading and a gush of the red stuff. But the traditional nature of the game is relished in, the cheesy brutality strewn along the mine shaft with expected gratuity. After a handful of rooms were unlocked and passed through, the team of characters would board an elevator and descend to the next series of chambers, separated by a bit too long of a load time (again, Alpha build). A boss battle was expected at the end of the demonstrated, but technical difficulties prevented it to be loaded. We were assured by the HVS team, however, to take whatever we thought was coolest at this year’s show and “multiply it by a million,” so take that as the badass, over-the-top grain of salt that it is.

We’ve all been there before, but probably not like this. High Voltage Software’s PS3-360-PC build of the The Grinder is high on its B-movie so-bad-its-good style, its HD-sheen not too proud to hide the decade-worn top-down formula that seems to be making a comeback all over the place in recent months. The Grind-house plot moves along with decadent cheesiness, chirping up between the killings just long enough to avoid overstaying its welcome. An arcade-style arsenal keeps the killing fresh, and geysers of blood will never go too far out of style.

Be sure to keep it here at Elder-Geek as we get closer to Halloween 2011 for all your The Grinder updates and news!