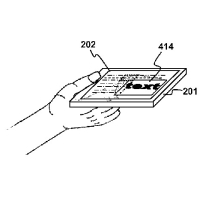 Both Microsoft and Sony have filed new patents reveal possible plans for new touch screen-enabled devices. Sony’s patent is for a device with “the visual display is disposed on a front side of the case and the touch pad is disposed on a back side of the case.” The two-screen layout is supposedly meant to combat the problem in which “the user’s fingers often obscure the part that is to be selected making selection difficult.” The patent falls in line with current rumors of a PSP2, but brings us nowhere closer to a confirmation.

Microsoft’s patent, filed last week (unrelated to the tech present in their Windows Phone 7), calls for a “…light-induced shape-memory polymer display screen…” that adds a “topography changing layer” to the device, which is activated by an ultra-violet light sitting atop the touch screen. The new technology hopes to capitalize on a lack of tactile feedback reported by users of many other current devices like the iPhone.