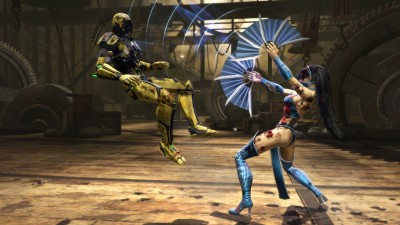 Get ready to “FINISH HIM!” Warner Brothers Interactive made the announcement earlier today that Mortal Kombat, the ninth game in the popular fighting franchise, will release worldwide on April 19th of this year. The game will have a simultaneous launch on both the Xbox 360 and Playstation 3 (in 3D), and is being developed by NetherRealm Studios.

And remember that sweet, live-action “Mortal Kombat: Rebirth” trailer from last year? Well, that same director has been confirmed to be heading an upcoming Mortal Kombat web series. Bloody Disgusting reports that the director, one Kevin Tancharoen, made the trailer without studio consent as more a demo reel with what he could do with the franchise. Warner Brothers listened, giving him 10 episodes with the license, with the first set to start shooting next month in Vancouver. Already cast in Michael Jai White as Jax, with Liu Kang, Shang Tsung, Kabal, Dural, Kitana, Mileena, and Scorpion also reportedly making appearances. No release date has been announced.