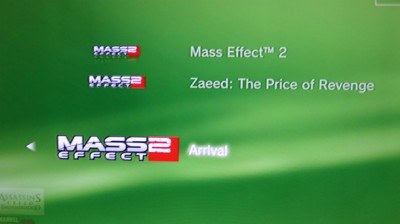 As if patching a game needed another reason to be worth it. “Arrival”, the newest rumored DLC for “Mass Effect 2” was found by Kotaku reader Vamplosion after updating his PS3 copy of the game to activate the repair patch for the game’s formerly crippling save deletion bug. Vamplosion found three new trophies, the cryptic clues provided with them providing possible details on what we can expect from the DLC’s plotline.
Warning, these achievements/tropies may contain spoilers to the DLC.

The Cerberus Network update for January 24th may provide some clues about the plot of “Arrival.”

Historians and astronomers alike are abuzz tonight over a new paper published by Dr. Amanda Kenson of the University of Arcturus. Her team claims that by testing the dust trapped in the gravity wells around a mass relay, and comparing its composition to that of dust clouds in the same system, scientists can create a timeline of when the relay passed through the dust. Her conclusion? “Only a small fraction of the mass effect relays date back 50,000 years,” she writes, “The majority are far older, indicating they were created by a species predating even the Protheans.” Dr. Aurana T’Meles of the University of Serrice met the information with skepticism: “While Dr. Kenson’s methods appear sound, the asari tried a similar procedure centuries ago and discounted it. What civilization could have spanned the galaxy for not thousands, but millions of years? If this were the case, we should have found mountains of evidence of their passing. Where is this species now?”

Bioware has not confirmed any “Arrival” details, but more information is expected near the launch of Dragon Age II.