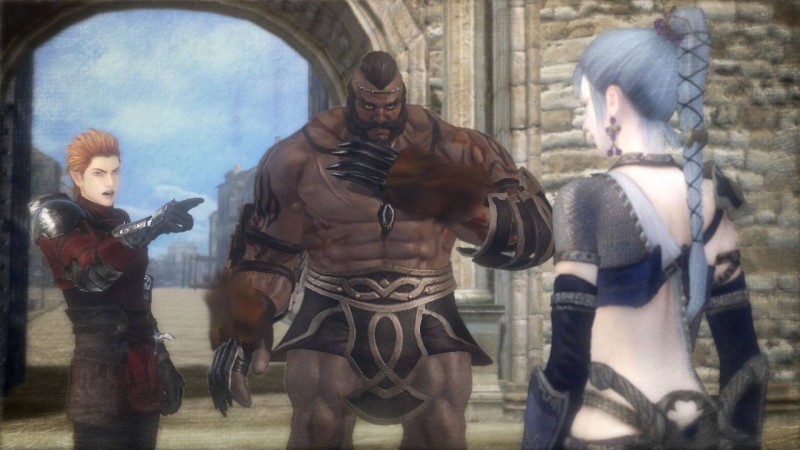 Instead of starting off the year with one of their big name titles, Tecmo Koei decides to bring out a lesser known game called Trinity: Souls of Zill O’ll. Trinity is part of the Zill O’ll series in Japan, and it is also the first game in the series to see a western release. The game revolves around three people who combine their strength to meet their goals, and it is set in a classic fantasy world. If you are a fan of elves, dwarves, monsters and the inherent racism that always keeps the half breeds down, then you should check this game out. 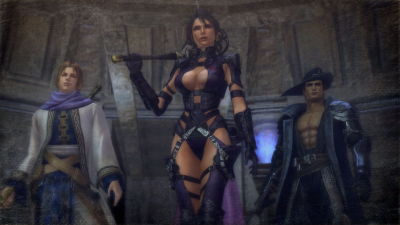 It wouldn't be a fantasy game without scantily clad women!

Right off the bat it should be known that Trinity is not Dynasty Warriors in a fantasy setting. Instead of hacking your way through countless enemies, the game is set up in an action RPG format that has you taking on quests, managing equipment and leveling up. While you do fight hordes of enemies throughout the game, the formula is much more complex than “sword + face = dead.”

As the name implies, Trinity follows the story of three people working together to overthrow an evil emperor. In true fantasy fashion, the names for people and places look like they were decided by someone putting scrabble tiles in a bag and picking random ones to make up the name.  There is Areus, the rebellious half-elf youth set on revenge; Dagda, the overly friendly giant who can still crush your skull; and Selene, the mysterious vampire ninja. I was expecting a cut and dry story with little depth, but I was pleasantly surprised when it started developing all three of the characters instead of just keeping them all one dimensional.

While the story is enjoyable, the way it is told leaves something to be desired. Every now and then you will see full motion cut scenes showing important parts of the story, but more often than not the plot is explained with still images of people and lots of text. This is not a bad method, but it can get a little disjointed because when you go into various areas you might see two random people talking about something completely unrelated, and it takes a minute to realize that they are not talking about any critical plot points. 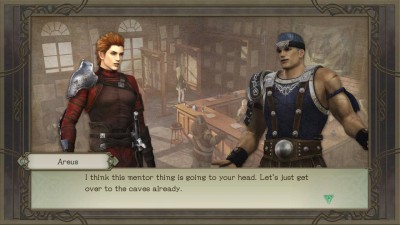 How a lot of the storytelling takes place

In addition to the story, there are the side quests upon side quests that you can take on. At first I thought they were specific quests programmed into the game, but as I completed a few I started to figure out that they seem to be randomly generated to help the leveling process. This is a good idea, but sometimes there will be a quest to escort someone through an area, and right after that there will be another quest to rescue the same guy from a completely different place. Even though it might not work perfectly, it is still a fun way to level up rather than just going into a random area and fighting enemies.

The look and sound of the game both have their good and bad points. As far as graphics go, the areas you explore each have a unique look to them and are definitely easy on the eyes. The character models themselves do not look as impressive, but I was surprised to see that there are a good amount of different enemies to fight. The game has a painterly feel to it, and that is made apparent by the semi-opaque canvas texture that covers the screen for just about the entire game. While it fits very well with the still shots in the game, it clashes with the full motion cut scenes and the game play. Thankfully your eyes will probably adjust to it rather quickly.

The audio is also a mixed bag. The soundtrack has some good epic sounding music fit for fantasy games, but if you are in one area for an extended period of time, you will start to notice the song repeating multiple times. As far as the voice acting goes, the majority of the characters sound believable, but there are a few that just don’t sound right. There are times when the characters take awkward pauses in the middle of their sentences, times when they sound like they’re reading directly off of a script and there are a couple of rough translation patches here and there. 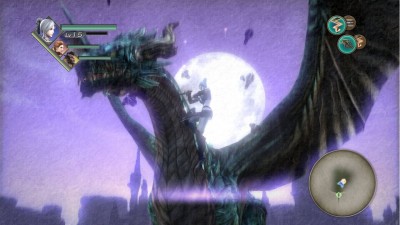 One of the many huge monsters you will face

In the gaming community Koei and Omega Force have built somewhat of a reputation for themselves as being a one trick pony with their Dynasty Warriors series. After playing Trinity I can say in my opinion, that is not true. There is much more to Trinity than just hacking and slashing at enemies. You will have to switch between the three characters regularly, manage your stats and equipment and make use of special moves to dispatch your foes.

The main part of the game play focuses on the unique skills of the three characters. While there is a basic attack button, you will get different skills throughout the game that have different elements attached to them. Every enemy has a different weakness, so you will constantly switch between your characters to find the best combination of skills to kill your enemies as quickly as possible. After a while you will probably stop using the basic attack and mostly rely on your other, more powerful moves. New skills unlock as the game progresses so unless you grind for hours on end, the combat will not get stale.

When you’re fighting you will notice that there is a targeting system. Sometimes this works to your advantage, and other times it will target an enemy you’re not looking at or an enemy behind a wall. Also, if you are fighting in a small area you might have to wrestle with the camera for a little while during battle. On the bright side, the AI is much smarter than it is in the Dynasty Warriors games. They hold their own during combat and hardly ever get stuck on the environment while following you.

While half of the action RPG resides in the action, you will still have to manage your characters. As you defeat enemies you get skill points to spend on leveling your different moves. Spending points usually results in one of your skills doing more damage or having more range, and the best part about this is the effects are immediately noticeable instead of it just being a numbers game. There is also a little bit of a dungeon crawling aspect to Trinity in that you will accumulate loot from enemies and after a few missions sell what you do not need. 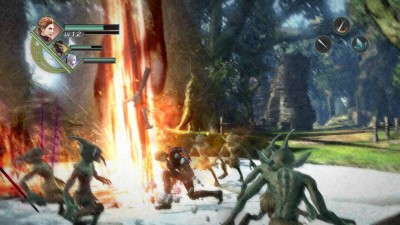 Skills are a very important part of battle

Outside of the dungeons, the navigation is entirely menu based. You are given a map and you move your cursor to which town or dungeon you want to go to. The towns give you a list of buildings you can go in rather than you walking around, and while that might not be as immersive as it could be, it’s not a game breaker by any means. Also, it cuts down on the load times which are already very good.

One thing I love about Trinity and all games like this is that they are as long, or as short as you want them to be. The side quests in Trinity are optional, so there is usually nothing stopping you from blowing through the story, but if you want to spend some more time playing the game, or if you just want to level up for a while you can always take a break from the story and go hunt some monsters.  That being said, the main story will still take you a decent amount of time to finish.

My biggest disappointment with this game is the complete lack of multiplayer, both local and online. With three characters to choose from it seems like multiplayer would be there, but unfortunately it is not. It could be because at some points you only have one character in your party, but co-op still would have been nice to have.

As far as action RPGs go, you can do a lot worse than Trinity. While it has its flaws, it is still a very solid game. The graphics and sound are mostly mediocre with a couple polished points, but the fantasized story and the game play are what really drive the game home. If you want to spend a good amount of time with a game completing side quests and other optional goals I would recommend a purchase, but it is still worth playing even if you just run through the main story.