In 1993, Electronic Arts and Bullfrog Productions released the original Syndicate on the Commodore Amiga and Microsoft Windows. It was an isometric cyberpunk experience that gained a life-long fanbase. Now, almost 20 years later, EA and Starbreeze Studios (the company that delivered hit shooters such as the original Darkness and The Chronicles of Riddick: Escape from Butcher Bay) have released the series reboot simply named Syndicate.

Aside from sharing the same name, setting and some design-styles Syndicate shares no similarities to the original. While fans might be displeased with the choice of creating another shooter, Syndicate (2012) has turned out to be a damn fine shooter.

In the not too distant future, civilizations swear less and less fealty to countries with geographic borders, and more to private companies with technological, financial, and military control. You are an agent of one of these mega-corporation syndicates and you’re equipped with the latest in technological hardware, enabling you to directly interact and manipulate anything else that is wired into “the system” including computers, some weapons, and even some humans. 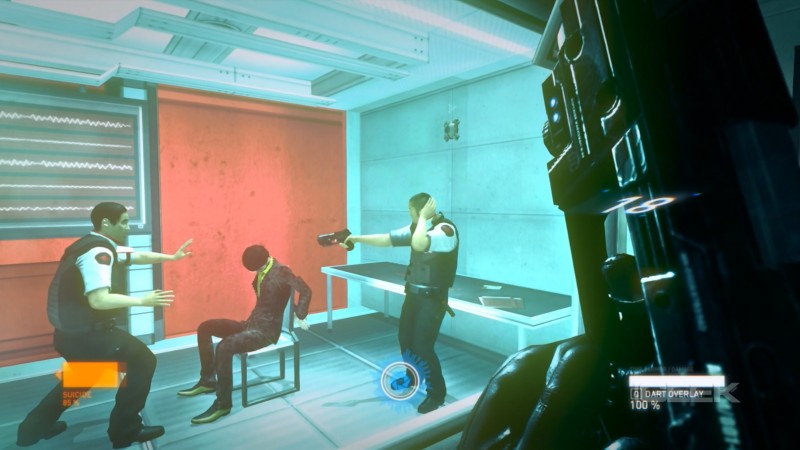 This doesn't look like it's going to end well.

What does that mean in terms of gameplay for a shooter? It means you can make some weapons backfire. You can have some enemies kill themselves. You can force them to kill for you. And as an elite agent with immunity, you can dispatch civilians without any legal repercussions.

As a shooter, Syndicate really delivers. It’s fast-paced, looks great, and sounds even better. Graphically, it’s one of the best-looking shooters on the market. The futuristic setting and art style are all very well defined. And while Syndicate is a linear experience, at no point did we feel like that was a setback.

We were impressed by the dynamic HUD system the game employs which added to the immersion instead of pulling you out of it. Ammo count hovers directly next to the gun you’re holding and all other meters that appear on screen bob and weave as you move your head. 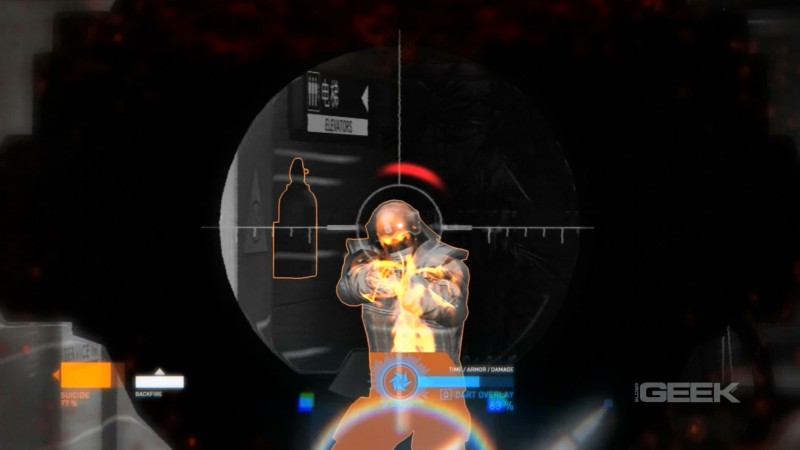 Though it bares little resemblance to the original, Syndicate is a wonderful shooter.

Every shooter has its own catch and Syndicate is no different. Your digital implants give you near-psycho-kinetic power that allow you to slow down time slightly and see enemies through walls. You can control distant computers. And you’re granted three distinct powers that recharge based on your killing style.

Suicide power does exactly as its name implies. It commands another computer-chipped human to commit suicide in the most violent fashion possible, by blowing themselves up and injuring everyone around them.

Backfire causes the weapons of your enemies to jam, causing minimal damage, but leaving them temporarily defenseless.

And the persuasion power causes your enemies to fight for you… before putting their own gun in their mouth.

As the game progresses, you discover and forcefully extract other agents implant chips, thereby enhancing your own. You can select which powers get boosted, adding a nice little RPG flair to the game.

In terms of story, Syndicate falls flat. But for a shooter, there is enough motivation to continue driving you forward. There are a few plot twists here and there, but it’s nothing particularly memorable. The voice acting, on the other hand, is phenomenal. Kath Soucie, Rosario Dawson, Brian Cox, and Michael Wincott all perform their roles very well. 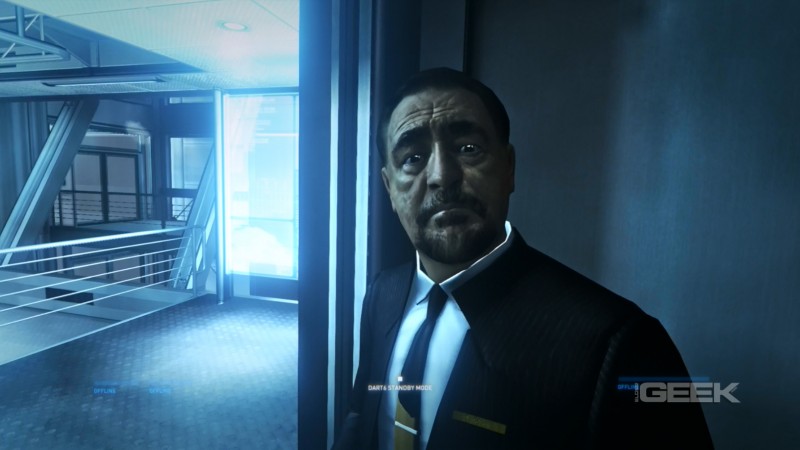 The small list of voice actors is impressive, to say the least.

There is no competitive multiplayer, which considering the number of competitive-heavy shooters there are on the market, we didn’t mind as much. If Syndicate suffers from anything, it’s from a slightly lop-sided fun factor. The beginning half of the game is infinitely more fun than the second half. And while the game’s super-powers never grew old by the end of our playthrough, the suicide power and the persuasion powers were rendered useless for roughly 1/3rd of the game which felt like a huge tease.

If you’re a shooter-junkie, you can’t go wrong with Syndicate. The action is fast and furious. The visuals are stunning. The audio demands to be experienced at full volume. And the co-operative maps will certainly bring hours of fun to you and your friends. But, like all modern shooters, Syndicate is a bit on the short side. All in all, it is a well-above average game that will please shooter fans, but might disappoint fans of the original tactical gameplay.