If you’re a fan of multiplayer online battle arena (or MOBA) games like Heroes of Newerth, League of Legends, and of course, Defense of the Ancients, Playstation Network and Xbox Live Arcade fans should turn their eyes to Awesomenauts. Ronimo Games’s latest title promises to give the MOBA genre a whole new perspective, but is it one worth seeing? 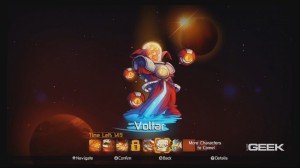 At the start of an Awesomenauts match, you and two other players pick from one of six characters to fight the enemy team. Upon entering the game, players will notice one major difference between Awesomenauts and more traditional MOBA games. Awesomenauts is viewed from a 2D side-scrolling perspective. This means that jumping is now an integral part of the gameplay experience.

For those unfamiliar with MOBA games, the objective is to defend your main base and its turrets from the relentless onslaught of the enemy team, while at the same time, attempting to destroy theirs. Mixing things up and keeping both teams on their toes is a variety of non-player hazards such as mini bosses, environmental traps, and booster pads.

Interestingly, Awesomenauts doesn’t deviate much in the way of MOBA character design. You play as either a support, tank or DPS character. At the moment, there are only six characters to choose from, none of which have particularly inventive or original skills sets. But it’s the way these tried and true roles are turned on their head when introduced to a 2D playing field that gives the combat of Awesomenauts its lasting appeal. 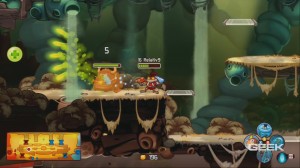 While MOBA games have traditionally taken place on the PC platform, Awesomenauts is tailor made for consoles. Each face button is mapped to jumping and three abilities; one straightforward missile or slash attack, and two specialized abilities like snare, hp vamp, healing, area of effect, knockback, stealth and more.

As you progress through a match you’ll be awarded Solar Credits (the game’s currency) which you can use to purchase skills and upgrades. Each skill has six possible enhancements, however, you can only purchase up to three of them. They alter your character’s damage buffs, additional status effects, increased range and duration of effects. You can also purchase stat boosters for things like health, health regeneration, movement speed and money over time. Most of the upgrades available appear intriguing enough, but we found it was very hard to appreciate them given the hectic nature of the combat. The game’s presentation fools you into believing it’s overly-simplistic, when in reality there are moderately complex strategies and character builds to explore.

At launch, balance is a big issue with the game. It’s not that more experienced players have an unfair advantage. They do have an advantage, but it’s not insurmountable. Rather, the problem lies with character balance. There are two characters in particular that alone can turn the tide of a match, specifically Clunk– a large tank-like character–and Voltar the healer. We’re inclined to let the balance issues slide, however, as most MOBA games have this exact problem in their first few weeks of existence. 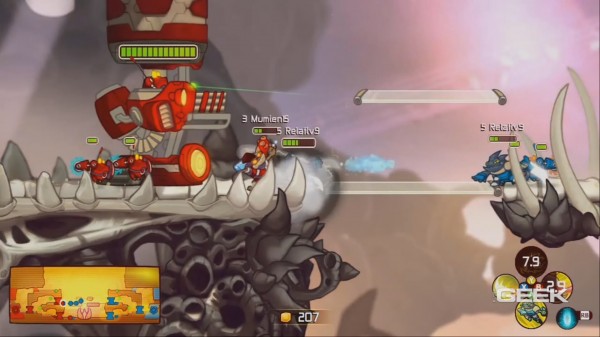 The art style, humor, music, and even title of Awesomenauts calls to the mind old Saturday morning cartoons. This concept is carried on through the whole game, with character one-liners being deliciously tongue-in-cheek. It’s all very well done and we can’t wait to see what future characters and maps will look and sound like.

Despite the flaws, Awesomenauts is still a great experience. It can be described most easily as a three-way lovechild of Megaman X, Super Smash Bros. and League of Legends, three games we absolutely love. Frantically jumping about the map trying to avoid enemy attacks while carefully timing your own is an experience you simply can’t get anywhere else in the MOBA genre. Awesomenauts is more than worth your time, proven by the hours of fun it’s provided for us. As an extra topping on the cake, the game even supports split screen coop for up three players.

You can’t go wrong with Awesomenauts. It’s a great little game that goes a long way in reimagining what a MOBA game can be. The game has its fair share of problems and inadequacies; it could use some further balancing, more characters to chose from, and a tad more depth. But for console gamers that want to see what all the fuss of MOBA-gaming is about, Awesomenauts should appear on your download queue.