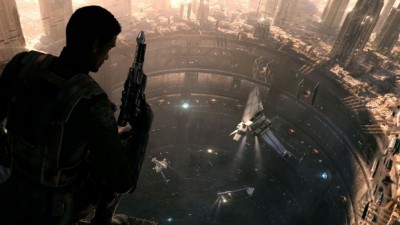 LucasArts will be taking its Galaxy Far Far Away in a more mature direction with its newly revealed Star Wars 1313 franchise. A “third person cinematic action adventure game”, 1313 focuses on a bounty hunter in the darker regions of the Coruscant underworld, firing exotic weapons and seeking answers to a criminal conspiracy. The production reportedly brings Industrial Light and Magic, Lucasfilm Animation, and Skywalker Sound together with LucasArts for a first attempt at “an integrated development approach”.

Star Wars 1313 will be formally unveiled at E3 next week.

“We’re excited to share one of the projects LucasArts has been hard at work developing,” said Paul Meegan, President, LucasArts.  “Star Wars 1313 dives into a part of the Star Wars mythos that we’ve always known existed, but never had a chance to visit. We are committed to bringing the best gameplay experience and visual fidelity to life and I truly believe the work we are showcasing at E3 will speak for itself.”