What was once a strange, but compelling blend of two vastly different worlds is now a rapidly growing series across five different consoles (or six if you count cell phones), and stands as one of developer Square Enix’s biggest sellers. This time the  franchise makes its way onto the 3DS with Kingdom Hearts: Dream Drop Distance, or KH3D for short. Some might argue we’ve seen far too many of these deviations from the main series, but this spinoff adds a lot of interesting mechanics to the already entertaining Kingdom Hearts formula and it sets the stage to the game all of the fans have been waiting for: Kingdom Hearts III. 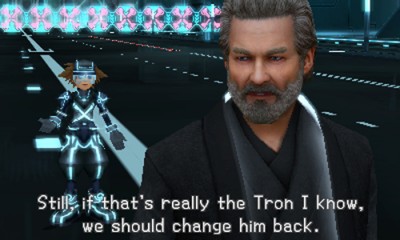 Yeah, well, this is just, like, my opinion man.

If you’ve played a Kingdom Hearts game that isn’t the card battle heavy Chain of Memories, then you should know what to expect when you turn on KH3D. It is an action RPG in which you travel to various Disney worlds and solve all of their problems while fighting enemies, leveling up, and collecting lots and lots of crazy named items. However, there are numerous new mechanics present in KH3D to liven up the classic formula. These include such new skills as flowmotion combat, the drop system, and the ability to play as both Sora and Riku.

Like most Kingdom Hearts titles, the story in KH3D starts off relatively simple and gets exponentially more complicated as the game progresses. Sora and Riku are in the process of completing their test to become keyblade masters, and to complete the test they must travel to worlds that are trapped in a state of deep sleep and reawaken them. Since the sleeping worlds are cut off from everywhere else, familiar characters don’t recognize Sora and Riku, and the Heartless are replaced with new enemies called Dream Eaters. Overall, the story is difficult to follow  but still remains entertaining and fulfilling. The best part is KH3D gives a recap of all of the previous Kingdom Hearts titles, so newcomers can play this game without feeling out of the loop.

Since there are two characters there must be a way to switch between them, right? That’s where the drop system comes in. As you play, the drop meter steadily depletes, and when it runs out, the character you are playing as decides they want to take a nap and you are switched to the other character. This can be aggravating when you first start because if you drop in the middle of a boss you’ll have to fight it all over again. However, you can choose to drop whenever you want, and it ends up being a good way to break up the story. Both characters visit the same worlds, but Square Enix did a great job with making each character’s story unique so you don’t feel like you’re playing the same game twice. 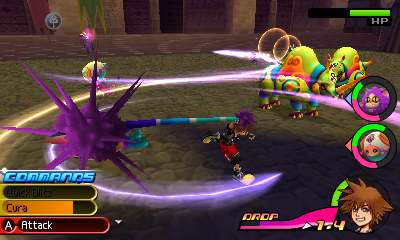 One of the many ways your Dream Eaters help you in combat.

The tried and true Kingdom Hearts combat has been given a significant overhaul with the addition of Dream Eaters and flowmotion combat. Instead of having Donald and Goofy at your side you collect items to make your own benevolent Dream Eaters to fight with you. In addition to fighting alongside them, you also care for them by feeding them and playing with them. This becomes integral because, in addition to the Dream Eaters helping you in combat, you can also unlock new skills and stat buffs with them. At first I wasn’t too big on the idea of a Pokemon/Nintendogs combo, but it turned out to be a great addition.

Flowmotion combat is introduced early on by the characters from the lauded Square Enix DS game The World Ends With You. Instead of just using your basic attacks and magic you can now roll into walls, poles, and jump on rails to start doing some insane acrobatics that you integrate into your combat and movement. At the start it feels very difficult to control because of the finicky camera, and you think “How the hell am I ever going to use this AND fight?” Luckily, the auto-targeting system works great in KH3D, and soon you will be dispatching enemies with little trouble. The only problem with flowmotion combat is that it becomes so easy and effective. You’ll probably neglect your regular spells and abilities and rely on the new system for a good portion of the game. 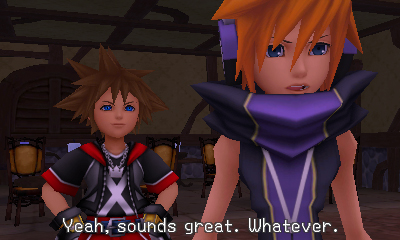 Neku and company fit in perfectly.

Sidenote: The section with the characters from The World Ends With You is especially great, and I’m probably going to replay the game again soon because of that section. If you haven’t played TWEWY yet, you should before you play KH3D just to get the most out of the character interactions.

The touchscreen is also involved in the combat effectively. Each world has a different combat mode called a Reality Shift that can be activated on occasion. If pulled off correctly it can yield massive damage to enemies all over the screen. These Reality Shifts include things like catapulting enemies into other enemies or rolling up enemies in a giant bubble. At times, I found myself scrambling to pull these off when I was in a tough situation and it also adds a mechanical uniqueness to all the worlds.

After playing so many Kingdom Hearts titles I didn’t think I was going to be blown away by presentation of the game, but I was wrong. Each level looks and feels alive and they all are surprisingly large without being overwhelming. The Dream Eaters are also hauntingly charming… when they’re on your side. The 3D, however, doesn’t really add anything to the experience. In fact, KH3D is the first game for the 3DS that hurts my eyes when I have the 3D on. 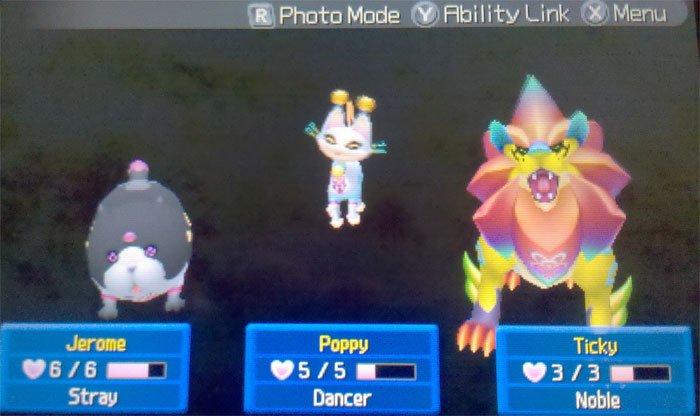 This is the best shot I could get of some of my Dream Eaters. Yes, they’re named after my cats.

The sound design is also fantastic. The music from the Kingdom Hearts series is always great, and this one is no exception. Throwing in some remixed tunes from The World Ends With You doesn’t hurt either, and the voice acting is also top notch once again with Haley Joel Osment at the helm. To this day I wonder how they mix universes like this and not make it sound completely ridiculous when characters are talking to each other, but somehow they do it and they do it well.

KH3D is a must own for fans of the Kingdom Hearts series, and it’s also a great game for newcomers. The plot sets up Kingdom Hearts III, and gives new players plenty of backstory. The slew of new combat mechanics make you want to pick fights just to use them more often, and all of the worlds are expertly put together. Normally spin-offs are famous for being lackluster and leeching off of previous success, but KH3D is a quality title and vastly different from that stereotype. KH3D is the perfect precurser to the ineviteble third entry in the series, and for that, we give it our Elder’s Choice award.