Got a PC? Like killing zombies? Then buy Killing Floor. It’s that easy.

Killing Floor is a multiplayer, first person shooter for the PC which can be purchased through Steam. You and up to 5 other players defend a given space from wave after wave of zombie and mutant attacks. It may be described as a poor man’s Left 4 Dead, but you’d be wrong. Left 4 Dead was most likely inspired heavily by this game.

Killing Floor started its life in 2005 as a mod for Unreal Tournament 2004. In 2008, the mod was up to version 2.5 and it was being built by 4 people. Later in 2008, Tripwire bought the rights to Killing Floor and on May 14, 2009, Killing Floor was released to the masses. Unfortunately, it was slightly overshadowed by another very similar zombie shooter and it was missed by entirely too many.

Killing Floor is visceral and gritty. Environmentally, the game is very comparable to S.T.A.L.K.E.R.: Shadows of Chernobyl, and that’s fantastic. The environment itself feels as though it’s been infected with something and as you anxiously wait for the next nearly-unstoppable wave of zombies, you feel it’s going to infect you. Luckily, you have the only known inoculation to protect yourself against the undead: your sidearm and a supply of very big guns.

You and your teammates start off each round with your wits, your knife, and a very limited supply of ammunition to survive through waves of oncoming zombies. During the breaks of the zombie tides, you are given a short amount of time to visit the local arms dealer and buy larger guns, ammunition, and body armor. Once your time is up, the store owner slams the door in your face, and you’re left to defend yourself against more and even stronger and larger hordes of zombies. It’s best to leave your current location, and seek a good defending place before you’re waist-deep in the undead.

There is a wide variety of weapons for sale from the gun store owner. You can purchase rifles, shotguns, crossbows, machetes, fire axes, sub-machineguns, flamethrowers, bazookas, and surprisingly much more. Each weapon has its own weight and feel that add authenticity to the game. My only complaint about the weapons (and this is a very tiny nit that I am picking here) is that the semi-automatic shotgun is pumped after every fire when visually it is clear that is not necessary to pump that model. Otherwise, each weapon is a ton of fun to unlock and test out on some dead meat. There’s something very satisfying about taking a hatchet to a crowd of the undead and living to tell about it. 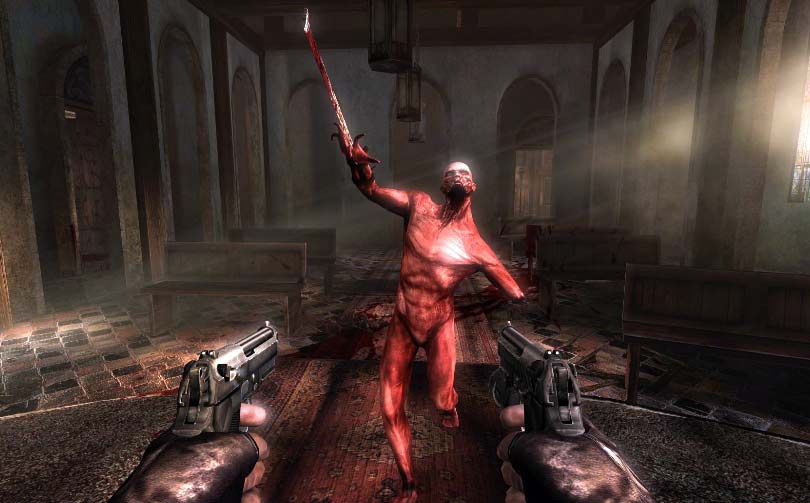 Ammunition is in short supply and head shots certainly do more damage than anything else. Anything but a headshot can sometimes feel like a waste of bullets, especially when the uglier zombies come crawling in.

The zombie models are fantastic. There are the standard zombies called clots. Crawlers are zombies mixed with beetles. Gorefeasts are like super-clots, but with a metal blade attached to their arm. Scrake’s are chainsaw wielding maniacs. The Bloats are overweight zombies who love to throw up. The Flesh Pound is a super zombie with clubs attached to its hands—it kind of looks like a mix of the Iron Maiden zombies and Garridors from Resident Evil 4. Finally, there are the Sirens, whose tormented scream will tear through the skulls of anyone near.

There is a very addictive perk system that adds a role-playing element to the game. You can chose to boost your healing, melee skills, or skills with different weapons depending on which perk system you chose to invest in. The higher your skill level, the more useful you are to the rest of your team and the more likely you all are to survive through hell.

I have very little negative to say about Killing Floor. But here are my negative points. First, there are too few character models and voices to go around in the game. All the players sound exactly the same. It doesn’t make the game harder. It just takes a little away from the immersion. As far as voice acting goes, the store owner possibly has the worst voiceover acting in videogame history. She sounds drunk… and slow. Besides owning a ton of guns, it’s tough to imagine someone like that surviving the zombie apocalypse. I looked through the options to see if I could turn off her slow, slurred speech, but I couldn’t find anything to remedy it.

And finally, the game is nearly impossible playing alone. Luckily, there seems to be a very active and friendly community playing this game at all times so playing alone is almost a mute point.

All in all, I can recommend Killing Floor to any PC first person shooter fan, especially if you’ve played Left 4 Dead and want something more. For only $20, it’s definitely worth purchasing.

One thought on “Killing Floor”