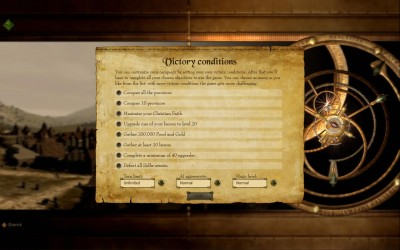 Choose your path to victory

The soul of Britannia is in a state of chaos with various kingdoms and religions vying to take hold and unite the country. King Arthur: The Saxons is the latest expansion pack from Neocore Games’s original title King Arthur: The Role-playing Wargame. In this expansion, players are brought back into the chaotic world of King Arthur playing as King Raedwald, the Saxon king of Norfolk and guardian of Christianity in Britannia. Expand your kingdom, spread Christianity to the pagan realms, recruit new heroes to your banner, and find a noble lady to be your queen. This stand-alone expansion provides for hours of additional gameplay including new units, customizable objectives, a more complex diplomatic manager, as well as new side quests for your heroes to accomplish and achieve new items and potential allies to your cause.

The gameplay is virtually the same from the original King Arthur game. In addition to being able to play the original campaign as King Arthur, players are also able to play as the Saxons, which gives players another perspective of the Arthurian legends. Another new feature added to the campaign is the ability to customize victory objectives. This allows for the more casual players to play through the campaign without being overwhelmed with a seemingly endless amount of objectives. For those that enjoy playing through 100, 200, or even an unlimited amount of time to do every single quest or objective, good luck with your quest.

Another nice addition to the game is the modified diplomatic manager. To supplement the basic diplomacy of the original installment, the modified manager allows players to pursue the ladies of kingdoms throughout Britannia. Marriage with any of these ladies would provide different benefits such as gaining unique items or more land in the form of dowries. Players will also be able to recruit heroes to join their side including those that have been captured in battle, a useful addition that comes in handy especially if you are lacking in leaders. The final attribute to the diplomatic manager is the ability to negotiate with the four third-party factions: the guild of the outlaws, marauders, the Christian Church, and the mysterious Sidhe. This adds an element to the overall campaign since you can request their assistance against your rivals such as invading their territory. 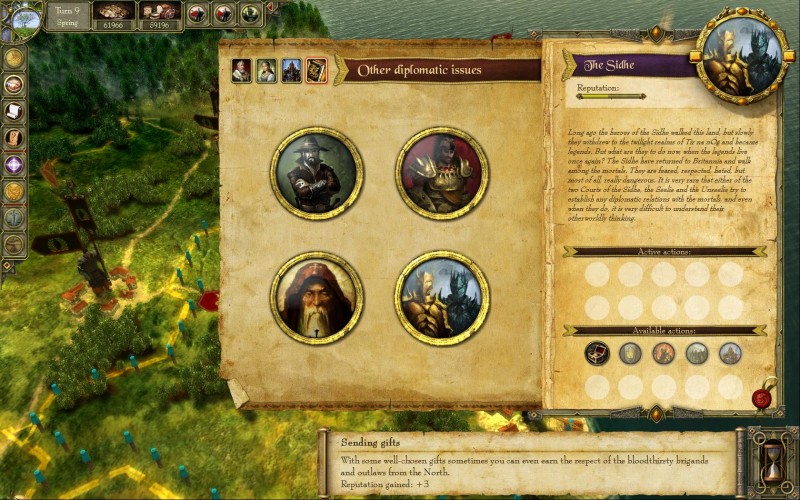 Gain the assistance of the four forces of Britannia

The environment of the expansion remains unchanged from the first game. Terrain features such as forests, swampland, and ruins such as stonehenges and fortresses still provide a nice aesthetic appeal as you’re moving around the campaign map and the battlefields. When on the battlefield, effective use of terrain is strongly recommended, and should not be dismissed as simply visual effect. If your enemy charges you with cavalry, instead of admiring the thick trees, hide your troops in them! Use the designs to your advantage. Units and individual heroes are phenomenal and highly detailed including the various mythical beasts. The weather effects, especially from magic spells, such as the transition from rain to sun should be lauded as they really play a huge factor during battles. As in the original, the environment and specific designs are well developed. Magic effects are really flashy add a great explosive element during combat, but the fighting is still a little redundantly animated. However, despite that, the battles are still pretty epic with everything moving at a rapid pace. Of course, to make the battles more exciting, the music is still just as bombastic as it is in the first. Though the soundtrack remains mostly the same, it still adds flavor to the mix without becoming too annoying and repetitive.

Overall, The Saxons expansion pack with its addition of new heroes, powers, unique items, a more complex diplomatic manager, and of course new campaign with hours of gameplay provides for an experience separate from the King Arthur perspective. Although, it would have been better to include the other kingdoms as playable factions in the game, the expansion with its bundle of goodies makes it a worthwhile purchase. If you’d like to wait for the inevitable combo pack including the original game and the two mini DLC packs, then by all means wait. However, for those who have the original and would like a fresh campaign, get The Saxons.

Gain the assistance of the four forces of Britannia

Choose your path to victory