The Blackhawk Ultra Gaming Tower from Rosewill is a black, full tower case made of steel. The first thing you’ll notice when unboxing this beast is it’s weight, which is at a respectable 37 pounds. For as big and stout as it is, it’s got a sleek look to it with black meshed metal sandwiched by polished steel. 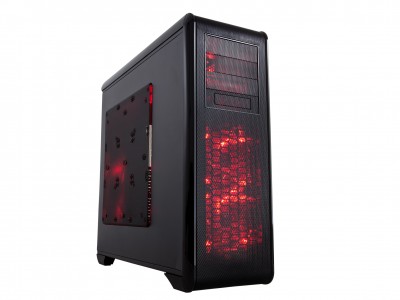 Rosewill went ahead and added some wheels to the case so you don’t have to manhandle it every time you want to readjust position, and for that we say thank you. After you’re done moving, just snap down the brake clips to keep it from rolling off into the sunset.

The side panel features more meshed metal, with a 230 mm red led fan mounted by default.

The front of the case has of four 5.25 meshed bay covers, and there’s even room for grandpa at the table with the inclusion of a floppy drive bay at the bottom. Below the bay covers are two 140 mm red LED fans which are the first layer of a four fan system that pull heat off your hard drives.

The front panel, located on top of the case, includes a pair of usb 3.0 ports, 4 usb 2.0, mic in, audio out, and your standard power andreset buttons.

To pop off the front of the case, simply pull from the bottom and work the sides to pop out each clip holding it in place. To take off the top, 2 screws need to be removed on the backside, and then the top removes just as easily as the front

The roomy interior of the case allows for a lot of options. If you believe a massive case like this deserves an equally massive system, the Blackhawk-ultra Would probably agree with you. 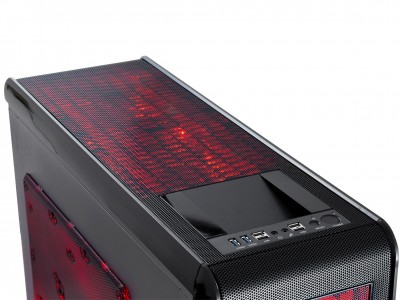 This pc case stands above and beyond many others with a top-loading HDD port.

The side panel has the option of installing a whopping nine 120mm fans, and you can even mount a 120mm at the bottom of the case if you want to go all out. Good thing the Blackhawk comes with a giant funbag of screws.
If you want to install the top power supply, it comes at the cost of one of the 230 mm red LED fans.

There is support for ATX to HTPX, two power suppliess, and preinstalled with 8 fans, the Blackhawk is ready to draw power and push heat.

Because of the support for multiple form factor mobos, there are enough cable management holes to make a very clean looking build. You can even ditch all the 230mm fans and install a water cooling system, which the Blackhawk also supports.

The 5.25 drives install with a tool free system. Simply inlock the clip, flip it up, slide in the drive of your choice, and lock it back in place.
Below the 5.25 bays is a gigantic hdd rack with space for up to ten hard drives.The two layered cooling system for the hard drive cage is just what the doctor ordered to move heat away from such a large number of drives. And let’s be honest here, it looks pretty cool.

As awesome as this full tower already is, it has one more trick up it’s steel sleeve. You may have noticed The sloping indentation on top of the case. At first we thought it was to hold odds and ends, but upon closer inspection we found it’s yet another hard drive bay! Forget the wheels, thanks for this! It’s not just convenient, it’s awesome.

This case looks great, but isn’t for your average consumer. This case was designed for hot, power hungry, high end systems. It’s nice to see a full tower case that begs you to use every option. You can see the hardware we used in this case doesn’t even do it justice. If you want to build a serious rig, look into the Blackhawk ultra gaming tower.