The Notepal X3 from Cooler Master is a USB powered notebook cooler that supports laptops of up to 17 inches. It features a very quiet 200mm blue led fan, and a dedicated front vent that makes you feel like you’re getting ready to bowl a strike when you’re using your laptop. On the underbelly of the X3 you’ll find fold out legs for adjustable height and viewing angle, as well as a cable management system that locks the USB cable in place when you’re on the go. The control panel for the X3 is on the bottom left hand side. There is an extra USB port alongside the miniUSB port used for power. The wheel is to control fan speed, and there are two buttons to turn the fan and LED on and off. 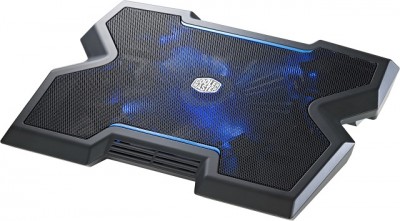 The laptop we’re using in this video is the ASUS N61VN, a 16” laptop with an Intel Core 2 Quad 2ghz CPU, 4GB of ddr3 SDRAM, a Geforce GT 240m video card with 1GB of memory, and a 320GB hard drive. In other words, it gets pretty hot. In our mini stress test, we’ll monitor the hardware temperature while playing counter strike source without the X3, and then we’ll turn it on and see what kind of difference it makes.

Sitting at idle, the processor cores all run around 100 degrees F. After playing CSS for 20 minutes, we saw those numbers increase by 50 degrees or more. The warning temperature for this processor is about 160 degrees, so here we’re pretty much maxed out. We continued playing for another 20 minutes while letting the 200mm fan do its thing. As expected, there was a drop in temperature. The X3 managed to cool down the laptop enough to keep it 10 degrees away from the warning threshold.

The X3 has a nice look as well as some usable features. The ergonmic design made playing CSS or just using the laptop feel pretty comfortable. We really liked the hand dryer, because as hardcore gamers, we know that if your hands arent sweating, you’re probably not doing it right, and a built in air vent beats wiping your hands on your pants every 90 seconds any day of the week. The blue LED looks great at night, and having the option to turn it down or all the way off is a big plus. Released on February 14th with an MSRP of 39.99, the X3 Notepal from Cooler Master is the newest laptop cooler out, and if you’re in the market we suggest you give the X3 a strong look.