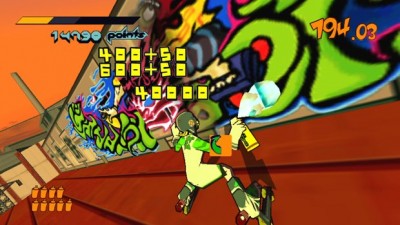 An enhanced port of Jet Set Radio was just announced for the Playstation Vita, sporting features that utilize the handheld’s unique mechanics. Containing all of the features present in the PSN and XBLA version coming this Summer, the game will also allow players to use one of the Vita’s touch screens for the game’s graffiti commands. No word yet on whether touch screen graffiti will act as an additional, optional input method or the port’s standard control scheme. The Vita’s camera will also come into “full use”, likely acting as an analogue to the original Dreamcast version’s use of .jpeg internet files for custom graffiti tags.

Despite sharing much of the same features as the PSN and XBLA release of the game, Jet Set Radio‘s Vita version will not be releasing in time with the digital download launch this Summer. It will, however, be playable on the floor at this year’s E3.