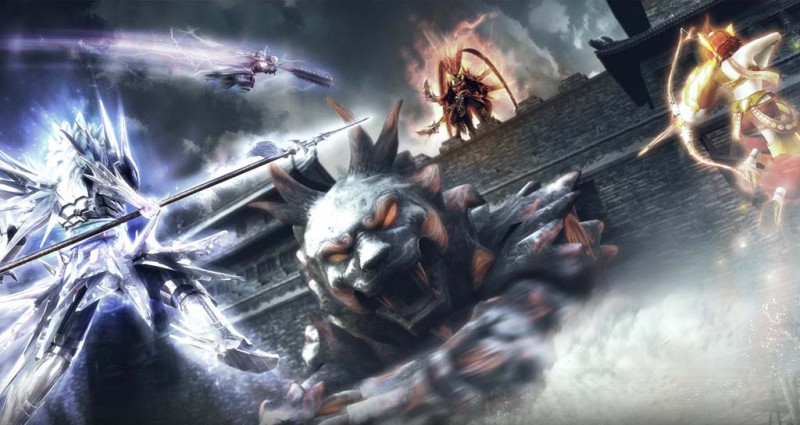 What do you get when you combine Dynasty Warriors with Dragonball Z and a little bit of Monster Hunter? You get KOEI and Omega Force’s multiplayer focused title Dynasty Warriors: Strikeforce. Originally a PSP title, Strikeforce is now available for the PS3 and XBOX 360 with updated graphics, extra quests and, most importantly, online multiplayer.

As you have probably already guessed, Strikeforce is an action heavy hack and slash. Even though there are less cannon fodder enemies to kill, players will still run through various stages killing everything in their path whether it’s regular enemies, siege machinery, or even giant monsters. 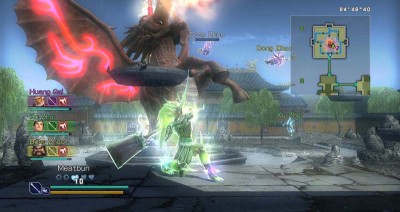 Since Strikeforce is in the Dynasty Warriors series, the story takes place during the Three Kingdoms period in Ancient China. Like the previous games, the story begins with a shaky Han Dynasty being toppled by rebels and tyrants, and then splits up into three separate stories depending on which dynasty you choose. The story makes sense to both newcomers and veterans of the series and there is more attention to detail than in the previous installments.

The story is broken up into quests and most of them either move the story along or add some amount of detail to it. The quests flesh out each section of the story and they add more of the Romance of the Three Kingdoms book to the game. For example, in the book Liu Bei visits Zhuge Liang three times before convincing him to join Shu, and one of the quests in Strikeforce has your character completing three minor tests from Zhuge Liang to complete it. Even though it’s not nearly the level of detail needed to tell the full story, it is a step in the right direction and it is nice to see.

In addition to the story related quests there are also filler sidequests where players fight against nameless bandits and other similar enemies, and crossover quests from a few characters that make cameos in Strikeforce. Depending on whether you chose the PS3 or the 360 version you will see some different characters, and others appear in both versions. 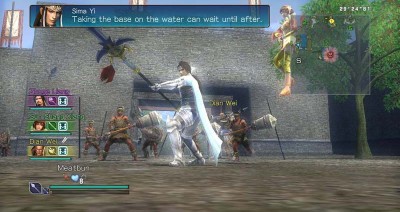 Not as many regular soldiers this time around

Strikeforce shines graphically on some points, and lulls on others. The good news is that the character models look good and they all have their own unique fury forms. The bad news is the stages you play on look rather bland and there are not that many of them. After you play a couple chapters you will notice that stages start to repeat. Since the game is a port of a PSP title it is understandable to an extent, but it would have been nice to see some more variety.

As always, the audio in Strikeforce is delightfully cheesy. During your adventure you will hear the wails of electric guitars and the awesomely bad and over exaggerated voice acting.  At this point, the less than adequate audio in any Warriors game is expected and it just would not feel like Dynasty Warriors without it.

The main new feature is the addition of fury mode. This is where Dragonball Z fits into my equation since everybody’s fury mode looks they turn into super saiyans. While in fury mode you become more powerful and you have access to your special attack. Items and skills can also supplement your fury mode and make it even more powerful. This addition gives Strikeforce something different from its predecessors and makes it fun when you transform, and terrifying when officers like Lu Bu transform. 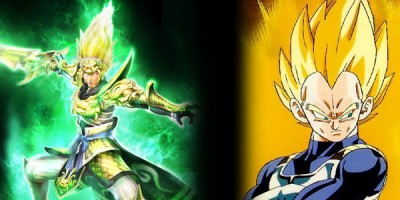 Another new feature is the implementation of dashes and extra jumps. This allows players to fly through the air and chain together large combos against their enemies. As you level and get better items you are able to stay airborne longer. Along with these extra jumps are some bits of platforming that can get pretty frustrating, especially when they are over water. Fortunately, these sections are few and far between and overall the jumps and dashes make the game feel fast paced and epic.

The last noticeable new feature in combat is the addition of secondary weapons. Each character has a primary weapon which cannot be changed, and a secondary weapon which can be any weapon in the game. The benefit of having two weapons is the fact that different enemies are weak to different types of weapons. While any enemy can be brought down with any weapon type, the best way to efficiently dispatch your foes is to plan ahead and choose your weapons wisely.

Unfortunately, the combat is not all good. Along with the new fast paced fighting comes a targeting system that has potential, but needs a lot of work. Targeting an enemy is no problem, but targeting a specific one in a group is almost impossible. When you switch from one target to the next it looks as if you are just changing targets randomly. Also, if you get stuck in a corner while somebody is targeted, the camera zooms way in and you will have no idea what is happening until you escape. When the targeting system works, everything is fine, but as soon as something goes wrong it will take a little while to iron everything out and start fighting again. 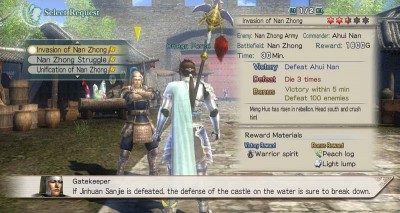 Cities serve as hubs when you are in between quests

Aside from combat, you also have your items. This is where elements from Monster Hunter come in. During every quest you will come across items to collect. These items are used for making new weapons and new items to power up your character. Leveling only does so much and you will need to constantly upgrade your weapons and items to survive. This adds some replay value to the game, especially if you want to get all of the trophies or achievements.

The point of a game like Strikeforce is to play with your friends. Up to four players can play at a time online, and for the most part it works pretty well. There is some of that signature Dynasty Warriors lag, but that happens in single player as well. The big problem I noticed is sometimes an event will not trigger for one of the players thus making it impossible for that player to finish the stage. This is a pretty glaring issue, but fortunately stages usually don’t take longer than 10 minutes to finish. Other than that, the online works well and it is a blast to play with your friends. Also, if nobody is online when you want to play, you can command three other officers and their AI is surprisingly good.

Is Strikeforce “game of the year” material? No. Is it really fun to play? Definitely. This game is very entertaining and I think newcomers along with fans of the series will have a lot of fun with it. While there are a few problems with the targeting and the online, the overall experience is still very positive. With over 40 playable characters and hundreds of quests, weapons and items, Strikeforce is a game that will entertain for a long while.