Today marks the official one year anniversary of Elder-Geek.com. A little over a year ago, this site was just an idea that I kind of kept between my wife and myself. But then I started to talk to other like-minded people. And quickly, this site started to take shape. But today, March 24th, is the official start of it all. 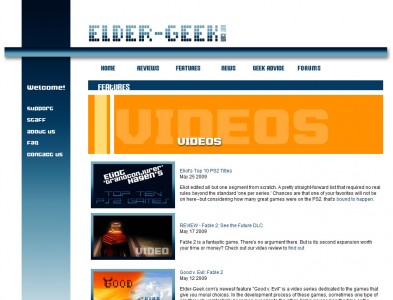 Terrible web host. . . 100% hand-coded. . . that old site was a headache, but I definitely look back on it with fondness.

In April 2009, a few of us put our ideas into action. We debuted on the internet on April 8, 2009. Back then, the site was 100% hand-coded by myself and Mats Paasche with the exception of our older phpbb bulletin boards. The site as a whole was simple and straightforward. Despite its “home made” look, we still drew a small audience of dedicated readers and before we knew it, we had outgrown our own design. Eliot and Kipp joined the fray adding op-ed pieces and reviews. Even back then, Eliot had tossed in more than his fair share of video reviews and features.

It wasn’t long until we started bringing on more and more writers like Gavin and Robin to pioneer our news efforts. Despite our small size, we were still able to attend E3 and bring on some fresh news to our readers.

In the summer we had our first revision of Elder-Geek. On the back end of the site, it was a dream come true. Most, if not all of the work that Mats and I had to put in by hand had been replaced by some preset templates. In August, Nate–an amazing designer whose work you’ve seen in many other places–stepped in and redesigned the entire site a final time into the masterpiece you see today.

Since launch day, we’ve done our best to have daily original content on our front pages for our readers’ enjoyment. I can only think of a few days where we didn’t either have a new review or a new feature on the front page. Certainly, we’ve had our fair share of praises and criticisms. We’ve had our highs and lows. But I can say with all sincerity, that my  favorite day of this entire year was one year ago today. It was the day that we dove into the pool instead of simply sticking our toes in the water. 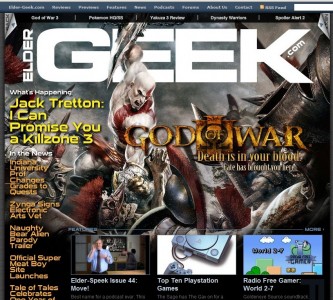 Elder-Geek.com as it appears today. But just wait until you see what's in store for this year.

This site is 100% independently owned and 100% volunteer operated. It’s run by people with 9-5 professional day jobs, full time school schedules, and demanding family lives. It is a labor of love by Elder-Geeks for fellow Elder-Geeks. To anyone who has contributed anything to this site over the past year, and you know who you all are, I can’t thank you enough for donating your time and talents. Without you, this site would be absolutely nothing. Thank you to all the developers, publishers, and fellow geek-culture sites that have been so helpful and courteous along the way. Thank you to all our readers from Reddit, Digg, Facebook and Twitter! Thank you to all our fans that have been with us from the start! And a very special thank you goes to my wife, The Bear, who influences this site more than any of you will ever know. And finally, a special thank you goes out to my big brother who was the inspiration for this site.

But today is a momentous day! It’s not just a day for reflection. It’s a day to look forward to the future! Elder-Geek is only going to get better. We’re going to be bringing better reviews, better user features, bigger  interviews, and more. And we’re going to cater it all to the geek who has been there, the geeks with wives, husbands, children, full-time jobs, mortgage payments, Monday morning staff meetings, retirement plans, divorces, in-laws, pets, noisy neighbors, insurance payments, shitty bosses, doctor’s bills, quirky co-workers, and no time to listen to over-privileged kids yammer on about the 35 reasons why their over-priced $300 console is better than someone else’s over-priced $300 console. We’ve got bigger fish to fry.

Here’s to an amazing second year!

24 thoughts on “From the Editor: Happy Birthday Elder-Geek!”