Out of Nintendo’s lineup of all-stars the Metroid series has the most unique past. From its original release in 1986 it has gone through more innovative unwanted upgrades than any of the other franchises. Whether it was skillfully adapting the space adventure to the underpowered, grayscale Gameboy Classic or fusing together elements of first person combat with platform exploration, the series has continuously surprised us by reinventing the genre in new and exiting ways. However, through all these variations several themes have remained intact: exploration, isolationism and item collection. With Team Ninja at the helm, Samus’ newest outing chooses to take a different approach and the results bear the question, what exactly is the other M?

M is for Misinterpretation

Other M’s biggest flaw is its deviation from the Metriod’s underlying canon. The game follows Samus as she explores the Bottle Ship alongside the current members of the Galactic Federation, a squad she was once a member of. During your time in the Bottle Ship, Samus will have constant contact with Colonel Adam Malchovich (the same Adam from Metroid Fusion). Having him and his crew all around you limits the sense of isolationism that often drives the dark atmosphere and mood of Metroid games. The result is a sometimes interesting and sometimes disappointing pacing that weaves in and out of classic enjoyment and hesitant acceptance. 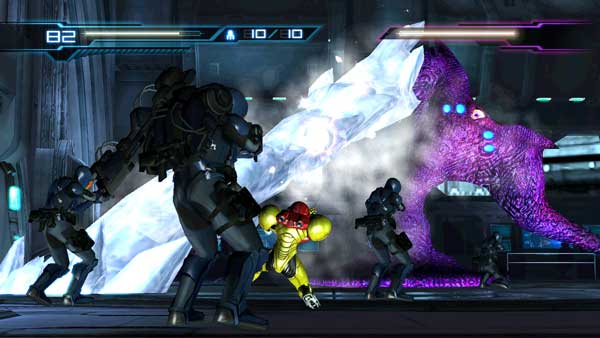 This incarnation of the long-standing series allows you to recharge your missiles at any time by tilting the Wii remote upwards. Not only does this eliminate the need for a bottomless missile supply but it severely limits the “gotta catch ’em all” attitude prevalent through all the Metroid games. Why bother increasing your item capacity when you seemingly have an infinite supply already? It’s still interesting to dig the extras out, it’s just not nearly as compelling.

On the bright side, the 2D/3D perspective shifts create a compelling dynamic that truly pays homage to the classic Metroid titles. Rounding a corner and having some unknown monster burst from the wall as the camera pans into position really accentuates the action on screen. Sometimes these angles can even make you forget the sub-par Wii graphics, which, by the way, are very fickle. The cut scenes are gorgeous on the Wii  and overall it is one of the better looking game on the system, but it will shift from sharp to pixellated at random and the massive contrast only aids in pointing out the poorer instances.

M is for Motion Controls 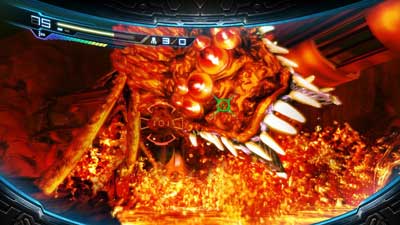 Although boss battles are exiting, the first person camera hampers the experience.

The only thing that really bothered me during my playthrough was the controls. The game forces you to use the Wii remote in the sideways position and I can hardly name a Wii title that would benefit MORE from the use of the Nunchuck. You cannot have a 3D game that runs off a D-pad. It’s almost ironic, Nintendo pioneered the standardized analog stick with the N64 and here we have them retreating back into an almost archaic design constraint. Furthermore, the confusing first person mode seems asinine and almost broken at times. In order to fire missiles or lock on to specific parts of a monster you have to point the Wii remote at the television and render your character glued to the ground while every other creature continues to move at full speed. It’s something you will inevitably get used too, but for the frequency that you use missiles the sudden disorientation you constantly face will be a jarring reminder that you’re playing a game.

Team Ninja does make up for the buggy control system by adding some satisfying combat situations. When you stun an enemy you can dash in and deliver a lethal strike. The auto lock will sometimes throw you off but the overall effect is solid. The combat is difficult and over time you might tend to avoid it altogether but I never found a good fight unwelcome. 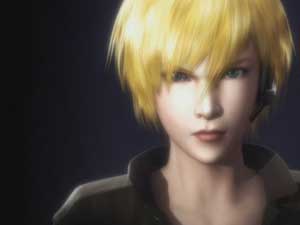 Does this look like a future bounty hunter or a pouty mother of two?

M  is for Miscast

Throughout the game Adam has our bounty hunter on a short leash, and the drab voice acting delivered by Samus makes me think the M might stand for menstrual. The story as well as the gameplay get really good as you progress but I was never able to get used to Samus’ dreary Mary Sue attitude. I’m really glad they finally added some real personality and dialogue to one of Nintendo’s major franchises (Wind Waker notwithstanding), but I never expected the woman who single-handedly eliminated Mother Brain to utter something as contrived as what is spoken during this game. She seems more of an addled homemaker than the fearless bounty hunter we’ve all come to expect.

M is for Maybe you should get over it

It’s true, I don’t completely agree with a lot of the cinematic and plot choices. But you know what, we should all just get over it. It’s like arguing that Han Solo’s deep-rooted nobility would never allow him to take the first shot on Greedo. Well, he did, so get over it. If this game starred any other character it would probably be one of the best titles on the Wii, but since it’s the sequel to a flagship series we’re going to hold the scrutinizing candle so close to the product that we are likely to burn the edges. The game is very good, if not a little short and lacking replayability. We should feel lucky that they didn’t hand us an arm cannon attachment for the Wiimote and put Samus on rails. The risks Team Ninja took to make this title are a huge gamble not only for Metroid but for any game, and for the most part they deliver on every level. Yes, the controls can be a little unnerving but, like every game, you will get used them. At the very least this is a platform for future titles to build upon and you should 100% try it before you listen to what anyone says.

19 thoughts on “Metroid: Other M Review”