Every gamer has encountered an event which has left them with their jaw on the floor, utterly speechless in the face of what they have witnessed.  Sometimes it’s a turncoat finally getting his comeuppance.  Sometimes it’s a previously unassuming character breaking out the beat stick and going to town on unsuspecting baddies.  Sometimes it’s a piece of history which will effect generations of gamers.  The Tropers, those who have dedicated themselves to identifying the common devices and elements in popular media, have a name for such an event: The Crowning Moment of Awesome.

Though as a knight he strives to protect his queen and country, Frog has issues.  His queen is kidnapped, his hero medallion missing, his sword broken and lost, and his mentor murdered.  And he’s been turned into a frog.  The vast majority of Chrono Trigger’s early game is spent righting these wrongs: the queen is rescued from captivity, the medallion returned, the sword found atop a mountain, the blade reforged using rare minerals, and the amphibian knight roused to take revenge for his comrade against the warlock who murdered him.

The only problem?  The wizard’s castle lies deep within a valley tucked between tall mountains.  The heroes learn of a hidden cave which leads to the valley, but are at a loss to find the entrance.  Picture the scene: while the rest of the party looks on to the rock wall helplessly, Frog observes the looming mountainside with a cold regard.  Slowly he walks forward, gripping the handle of his reforged blade.  Drawing his sword and holding it to the heavens he smites the stone in a brilliant flash of light, revealing the hidden cave.

Putting aside all the remorse and self-doubt, Frog makes a bold declaration of strength by cutting down the final obstacle in his path to the mage’s stronghold.  Casting down the stone wall with a mighty slash, Frog makes it clear that nothing will stand between him and his revenge.  This is truly a Crowning Moment of Awesome worthy of song.

Infamous – An Easier Choice than Intended

Forces beyond delivery man Cole MacGrath’s understanding have placed into his possession a terrible device.  Upon activation it conveys incredible power to its wielder, devastating a wide area around them.  Cole, unaware of the danger, is tasked with delivering this device to an address in the heart of Empire City.  Before he can do so the device is detonated, destroying several city blocks but leaving Cole unharmed.  Afterward Cole discovers the event has conveyed him a gift; the ability to control electricity. 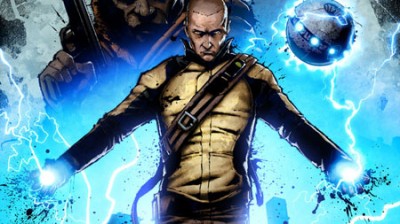 Do you commit an atrocity today, or risk a far greater one in the future?

Shunned by the citizens of Empire City and labeled as a terrorist, Cole seeks to clear his name by finding those responsible for the tragedy.  As Cole uncovers more and more of the mystery, and as his powers grow ever stronger, he learns of a device identical to that which gifted him with his powers.  Upon finding the device, the player is given an unexpected choice: destroy it to prevent it from falling into the wrong hands or, effectively, BE the wrong hands.  Upon being used for a second time, the device endows Cole with even greater power and once again destroys several blocks of Empire City.

Moral choices in games have become somewhat of a contested topic.  These choices are typically mundane: will the character save Susie’s kitten from a tree, or will the character beat Susie with a crowbar and set fire to said tree?  Cole’s decision whether or not to use the device raises the bar in terms of scale and complexity.  Activating the device may claim thousands of lives, but does Cole really care about them after they’ve made him a pariah?  Destroying the device would spare their lives, but would Cole have enough power to tame the forces running amok in Empire City?  While the player may choose the path of the hero, the gods of Awesome smile upon the player who detonates the device a second time.  Thus Cole is transformed into a near-invincible badass, slinging black and red lighting at his cowering enemies.  Cole’s decision to subjugate the citizens of Empire City, keeping their anger in check with his unlimited power, is literally a Crowning Moment of Awesome.

In the future portrayed by the Metal Gear Solid series, the world’s economy is driven by war.  Corporations and governments hire armies to wage proxy wars with each other on far-flung battlefields.  Private Military Corporations (PMC’s) made up of high-tech super soldiers carry out their orders ruthlessly and with nanomachine-aided precision.  At the center of it all is the Sons of the Patriots (SoP) system, a network of supercomputers and satellites which monitors the condition of every soldier in the world, regulates their weaponry and equipment, and feeds live data from one soldier to the next in order to improve combat effectiveness.  Solid Snake and Otakon have dedicated themselves to subverting the Patriots’ control.  Standing in their way is Liquid Snake, who for unknown reasons is manipulating a group of PMC’s to interrupt Solid Snake’s operations. 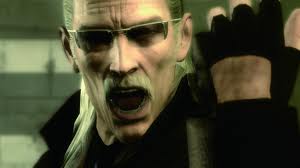 "Now I control the system!"

Midway through the game Liquid Snake reveals his true goal: to gain control of the SoP system and place all the armies of the world under his control.  Just as Solid Snake is about to corner his brother Liquid, he gains temporary control over the SoP system.  The military forces pursuing Liquid look on helplessly as the SoP system locks their weapons, cuts the motors on their vehicles, and interrupts their communication.  Through a complicated series of moves, Liquid has come to control all the armies of the world.  Though it does not last, it is still a terrifying display of power worthy of a Moment of Awesome.

Khalisah bint Sinan Al-Jilani is an excellent representation of biased reporting.  In the world of Mass Effect, where humankind has expanded to the stars and formed a fragile alliance with the species encountered there, Al-Jilani has a decidedly pro-human agenda.  When she corners Commander Shepard and asks his/her opinion of a highly-classified government operation to track down a rogue alien agent, Shepard is at a loss.  The player can have Shepard refuse comment, respond with grace, or strike Al-Jilani in the face.  Given the circumstances, the latter most option is quite tempting.

Al-Jilani proves persistent, as she corners Shepard once again in the sequel regardless of how the previous interview ended.  This time Al-Jilani interrogates Shepard about the events which occurred at the end of the first Mass Effect, questioning whether Shepard’s actions were in the best interest of humanity.  Al-Jilani makes it clear that, in Shepard’s shoes, she would have sacrificed any number of alien lives in order to save that of even one human.  Shepard can respond in a variety of ways, the most satisfying of which is with yet another swift punch to the face.

Shepard’s crew is not comprised solely of humans.  Drawing parallels to other great Science Fiction mainstays, Mass Effect emphasizes inclusion among races.  The player may choose the level of tolerance with which Shepard treats aliens, but when faced with such a stark, one-sided view as that held by Al-Jilani, even the most pro-human Shepard must take action. Whether or not that action is violent is up to the player, but either way Shepard’s response is the stuff of Awesome.

Samus, the star of the Metroid series, is a woman.  Samus is also an ass-kicking bounty hunter so full of Awesome that it cannot logically be contained within a suit of armor.  But when Metroid was released in 1986, gamers didn’t know any of that.  The game box and accompanying materials were adorned with pictures of Samus in her suit and made no reference to her gender.  This information is revealed at the end of the game, given that the player has beaten it under a certain amount of time. 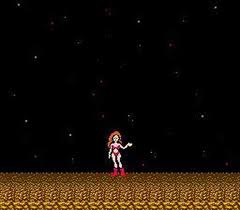 The treatment of Samus’ gender in Metroid serves as an example for other games to follow.  The gamer is given witness to her abilities firsthand before they learn of her gender, thus dispelling all presumptions which may have surrounded Samus as a female character.  At a time when many female characters simply served as Polly’s to be saved by Jump Men, the developers of Metroid chose a female to star as their action hero.  Furthermore, they defied stereotypes by directing the player to appreciate her skills without considering her gender.  Samus is female AND she’s badass.  The reveal at the end of the game is most definitely a Crowning Moment of Awesome both for the developers and for Samus as a character.

6 thoughts on “Five Crowning Moments of Awesome in Video Games”