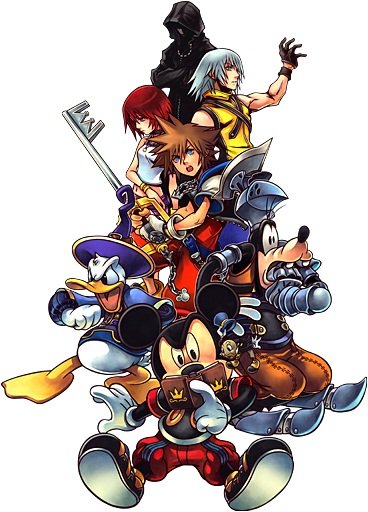 I know, I know, at this point you are all sick and tired of these portable versions of Kingdom Hearts and you just want Kingdom Hearts 3 already, but hear me out. Kingdom Hearts Re:coded is actually a lot of fun. What started off as a mobile phone game in Japan has made its way to the US and Europe as a Nintendo DS title. At first glance a two year old cell phone game on the DS might not sound like a lot of fun, but out of the three portable Kingdom Hearts titles released so far, this is the one I had the most fun with. 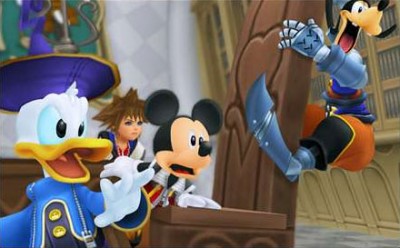 The gang's all here

Re:coded is an action style RPG very reminiscent to the other games in the series except Chain of Memories. You can bash enemies with your keyblade like always, and the magic system from Birth by Sleep makes a return. There are also new aspects of the game play that keeps the game fresh and fun throughout. The best part about this is you go back to the roots of Kingdom Hearts and play through the game as Sora instead of some other random spiky haired guy.

After the events that occurred in Kingdom Hearts II, Jiminy Cricket is organizing his journals that hold the records of what happened during the first two games. He finds a strange phrase in one of the journals and takes it to King Mickey to transform its contents into what seems like a computer program. When they do this they find bugs and glitches infecting the worlds Sora visited, so it is now up to a Sora made up of nothing but 0’s and 1’s to take out the bugs and return the journal to normal. It is a pretty straightforward story, and if you have played the other titles in the series you will probably guess whatever twists they try to throw at you almost immediately. While it is not terrible for what was once a mobile phone game, the story is definitely the weakest part of Re:coded. 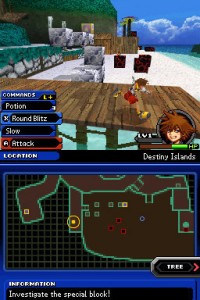 Going back to basics

If you played the first Kingdom Hearts for the PS2 then you will recognize most of the areas you visit throughout Re:coded. While a couple of the worlds look the same as they did in the previous titles, others got a bit of a facelift, which is nice to see. In addition to the worlds, the cut scenes also look great. There are the full motion cut scenes which are very entertaining, and there are text based cut scenes where still pictures of the characters talk back and forth to each other. Fortunately, the characters’ pictures change with their emotions, so going through those cut scenes is still enjoyable. Also, throughout the game you will see many Disney characters as well as Final Fantasy characters. This is great because the Disney/Final Fantasy mash-up was the original selling point of these games.

Like the other portable titles, Re:coded borrows heavily from the soundtracks of the PS2 titles, with only a couple original songs. Normally I would be disappointed by this, but since you are essentially playing through the events of the first Kingdom Hearts, it makes sense to use the same songs. While the soundtrack might seem uninspired, the voice acting is fantastic once again. Most of it is the various Disney characters speaking and we all know how much experience those voice actors have, but the actors for Sora and everyone outside of the Disney universe are just as good. 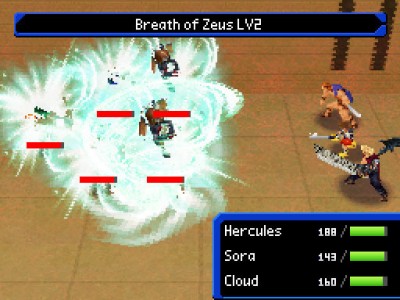 When I started up the game I was pleased to see that the tried and true game play was back. You travel from world to world with the option to go back to previous worlds and complete bonus objectives. After every world you get a new keyblade to hit stuff with and each one has a unique feel to it. As you bash enemies and cast spells you level up a combo meter (called the overclock meter for all you computer people) and as it levels you gain special abilities depending on which keyblade and items you have equipped. Instead of an MP bar the spells you cast have a cool down period afterwards and you can combine two spells or special moves to make a new, more powerful one. While this is all same old, same old, as I played through the game I saw new aspects surface, such as a new leveling system and different genres of game play sneaking in every now and then.

When I say different genres of game play, I mean something completely different than the action RPG style of play Kingdom Hearts is known for. Since the worlds you visit are infected by bugs, they might have glitches that alter the look and feel of it. For example, one of the boss fights puts you in a Sin & Punishment style shooting game and at one point you are even thrown into a turn-based RPG style of game play. These tweaks to the game make it enjoyable, entertaining, and keeps it from getting stale. 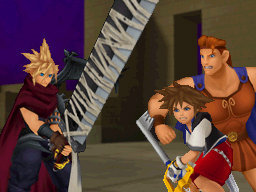 You will see both Disney and Final Fantasy characters this time around... and not just the moogle who runs the store

Leveling in Re:coded takes the general idea from 358/2 Days and improves on it. Every time you level you get a “level-up chip” which you have to program into Sora. You also get other chips like additions to your attributes, spell casting and resistance. You put these chips in pre-determined paths onto a circuit board and unlock skills and segments of the board that let you alter the game. For example, at a certain point you will be able to decide the general difficulty of the game, whether you want enemies to drop more items at the cost of your own HP, and whether you want to make the enemies stronger and also drop more prizes. This system is surprisingly addicting and there were many times I found myself rearranging the chips so I could get the best possible outcome.

Unfortunately, not everything in Re:coded is as polished as the various combat systems. Both the platforming and the targeting system are temperamental and never seem to do quite what you have in mind. The camera can also be tough to control at some points, especially during the boss fights.

Even though Re:coded is another portable release during the seemingly endless wait for Kingdom Hearts 3, that does not stop it from being a very entertaining title. What was once a mobile phone game in Japan is now a great DS title, and while the story is a little weak, the game play keeps you on your toes throughout the experience. This game is definitely a must buy for all of you diehard fans out there, but with the game clocking in at just under 12 hours for me, I would say that casual fans of the series will be satisfied with a rental.