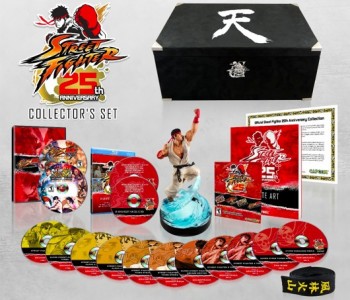 In terms of bonus goodies, the set includes the series’ two animated feature films, a documentary, the complete Street Fighter animated series, a light-up statue of Ryu, a 64-page art book, an 11-disc soundtrack collection, a replica of Ryu’s belt, and a certificate of authenticity. All bundled in an attractive velvet box for the retail price of $150. Oddly enough, the original Street Fighter is nowhere to be found in the collection.

The Street Fighter 25th Anniversary Box Set will release on September 18th for the PS3 and Xbox 360.