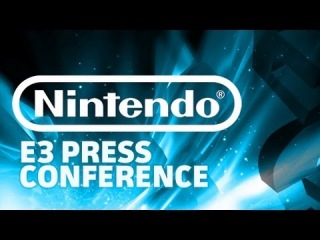 Nintendo came into the Press Conference game this year with the highest amount of scrutiny and hype once again. Proclaiming their program to be “all about the games”, even Reggie stated that “my body is ready” for the reported 23 games on display for both the Wii U and 3DS. With a focus on Miiverse and a variety of gameplay uses for the GamePad, the Nintendo conference

Shigeru Miyamoto started things off strong with the debut of Pikmin 3, announcing the new breed of Rock Pikmin and a unique Challenge mode to be playable on the show floor, which tasks players with collecting the most amount of fruit within a time limit. The Wii U’s higher resolution allows for better rendering of individual Pikmin, and the GamePad primarily utilized as an interactive map screen. Players will also be able to toss Pikmin at objectives using the WiiMote.

The Wii U itself was re-introduced with the promise of a three-tiered experience: Games, Social, and Entertainment. Netflix, Hulu Plus, and Youtube were confirmed for the platform, and asymmetric gameplay was described as a central tenant to the console’s gameplay structure: with Gamepad users in solitary, separate role against Wiimote users. It was also revealed that the platform would support up to 2 Gamepad users at a time.

The Big N elaborated on the MiiVerse home screen, now called “Main Street”, which organized Mii friends and their running commentaries under “Billboards” for player owned and/or globally trending games. Comments, sketches (“like Swap Note”), facial expressions and screenshots can be posted with any available game on “Main Street”. As it was said during Nintendo’s Direct Conference this past Saturday, the feature would be available at the launch of Wii U, but come later to PCs, Smartphones, and 3DS.

The social connectivity of Miiverse was demonstrated at length with a trailer for New Super Mario Bros. U, with commentary blurbs and tips appearing at death screens and overworld hubs described as a “real time social window”. A new flying squirrel suit was also shown off in the trailer, as were different colored Yoshis (with varying abilities like blowing bubbles and inflating into balloons) and a new boost mode which allows for a fourth player on Gamepad to drop blocks for other players.

A Wii Fit U trailer introduced new activities like the trampoline and luge, and hinted that it would remain compatible with the Wii Balance Board. Routine/score sharing and off-TV play were the main components advertised for the Gamepad. SiNG from FreeStyle Games (DJ Hero) also debuted, a karaoke party game that displayed lyrics both on-screen and on-Gamepad.

While it was revealed that a “true” 3DS software showcase would be streamed at 6pm PST tomorrow, a trio of first party titles were focused on this morning. New Super Mario Bros 2 (August 19th) featured new solid gold and coin-box head suits. Paper Mario: Sticker Star (Holiday 2012) focuses on stickers within the environment that act as collectible battle commands/items and interactive objects for stage progression. And Luigi’s Mansion: Dark Moon (Holiday 2012) will feature a host of new ghosts and gadgets. A sizzle trailer followed for third-part 3DS software, and included Castlevania: Lords of Shadow – Mirror of Fate, Epic Mickey: Power of Illusion, Scribblenauts Unlimited, and Kingdom Hearts 3D.

Lego City Undercover was demo’d next, revealing a system of disguises and Gamepad crime solving for the open-world Wii U adventure. A separate 3DS version was announced to be “in the works”. Ubisoft then took the stage to work a live stage demo of Just Dance 4, showing off the “puppet master” mode on the GamePad that allows players to select from different move sets in real time for other players to perform during each song. A new trailer shows the Gamepad’s use as an inventory menu, zombifying photo editor, radar map, sniper crosshairs, and door hacking tool. Another sizzle reel followed featuring Assassin’s Creed III, Rabbids Land, Your Shape, Rayman Legends, Sports Collection, and Avengers Battle for Earth.

The conference concluded with an extended first look at “Nintendoland”, a game in the Miiverse that gathers 12 “attractions” from first-party IP to a virtual theme park. The attractions confirmed for the experience were Legend of Zelda: Battle Quest, Animal Crossing: Sweet Day, Donkey Kong‘s Crash Course, Takamara’s Ninja Castle, and Luigi’s Ghost Mansion: Haunting Hijinks. The latter was described in detail, acting as an example of assymetric gameplay. Hijinks casts the Gamepad player as an invisible ghost whose location is only known through WiiMote rumble. Wiimote users shine “flashlights” on ghost to do damage, maintaining battery life throughout the round. Nintendo left the stage with the announcement that “Nintendoland” will be available at the Wii U’s launch, and the grand promise/tagline of the Wii U: Together. Better.