The fact that the Dead or Alive series uses sex appeal to push their games is no secret. If the well endowed women and the jiggle physics don’t give it away, the multiple volleyball spinoffs showcasing said women and said physics will repeatedly beat you over the head with this fact until you are willing to accept it and seriously think about why you bought the volleyball game in the first place. No, seriously! I bought it because I like playing virtual volleyball! 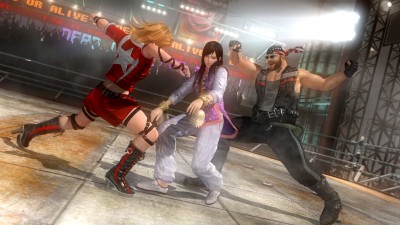 That looks like it’s going to leave a mark

Thankfully, for the main series at least, there has always been a solid fighting game behind the jiggle. Dead or Alive 5 is no exception. DoA 5 is a 3D fighter that is flashy and often times over the top. Instead of relying on crazy combos, the point is to read your opponent and counter appropriately. This means that newer players can usually hold their own even against more experienced fighters.

DoA 5 boils down to a system involving strikes, throws, and counter holds. Holds beat strikes, strikes beat throws, and throws beat holds. This is where learning your opponent’s strategies come in handy, because you’re basically playing a very violent version of rock, paper, scissors. On top of these moves, you can also stun your opponent and open them up for an extended combo or a power blow that does massive damage. Like most advanced tactics, stuns and the like are difficult to get comfortable with at first.

There are 24 different characters to choose from in DoA 5 and they all have their own unique playstyle, strengths, and weaknesses. Most of them use different fighting styles, so you can do things like pit a pro wrestler against a Jeet Kune Do expert or have a ninja and the town drunk duke it out. The most important thing is that all of the characters are fun to experiment with, and none of them feel like a chore. 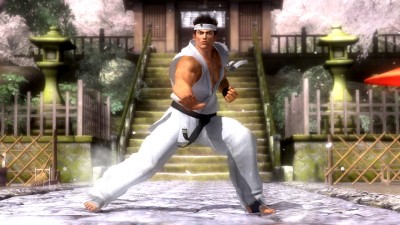 If you want an introduction to most of DoA 5’s characters, you will want to go through the story mode. That’s the only reason you will want to try it because the story is the weakest part of the game. The plot falls flat and doesn’t do justice to the diverse cast of characters. On top of that, the story mode also doubles as the game’s tutorial. Some of the tips are helpful, but the more difficult ones can be hard to grasp, and the game can get bogged down when the AI doesn’t want to cooperate during a particularly difficult hold or throw. Thankfully, there is an additional, much more helpful training mode that lets you get more comfortable with each character’s specific move set.

After you look past the weak story you will see the content that really gives you the bang for your buck. You have your standard arcade mode and time attack, which you can play either solo or tag team, and you also have a solo survival mode. Don’t worry, versus mode is there too. These modes are where you’re going to be spending most of your single-player time and they don’t disappoint. They have various difficulty levels, and you’re going to want to play through all of them to unlock all of the extra costumes and other content. 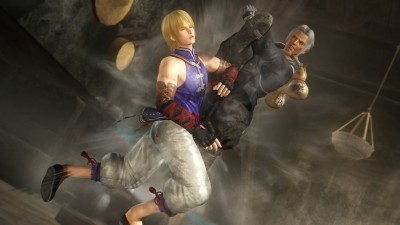 The online multiplayer is a different story. After playing a series of matches with incredible lag, I did some research to see if others were having the same problem. I found that some people are, and some people are not. Tecmo Koei has acknowledged the issue, so hopefully there will be a patch soon. The online set-up itself makes it very easy to find a match. You can get into a quick match, ranked match, or make your own lobby with your own rules. Finding opponents did not take long, and once the lag is fixed I foresee a lot of online play in my future.

DoA 5 gives its players a great presentation visually. Character models have been updated, and things like sweat and dirt have been added, but the real beauty lies in the level designs. Most fighting games put you on a glorified square and have you trade punches, but DoA 5 takes things to the next level… literally. Some stages are multi-tiered so you can knock your opponents off of high places or through walls, and some have danger zones. For example, there is a circus stage and if you knock your opponent through a ring of fire they get run down by a tiger. You can’t really top that.

The audio doesn’t impress as much as the visuals. The soundtrack is a little lackluster and filled with bad rap songs for some reason. The English voice acting is good overall, although some of the accents are a little over the top for some characters and absent from others whom you’d think would have them.

When it comes down to the core gameplay, Dead or Alive 5 is a very entertaining and action-packed fighter that can be enjoyed by experienced players and newbies alike. The weak story is a forgivable offense since fighting games are never known for their stellar plotlines, and the diverse cast list along with the awesome level design will keep you coming back for more. Hopefully the online issues will be resolved soon, but until then there is plenty of single player content to keep you busy.