I’m sure most people are familiar with side quests in video games. They can range from collecting some rare treasure to finding any number of useless items. The Animal Crossing series is like one giant side quest. The games revolves around gathering objects, making money, and generally living a virtual life. I haven’t played an Animal Crossing game since the series debut on the GameCube in 2001, so I was curious to see what new features Animal Crossing: New Leaf had to offer. I was not disappointed. 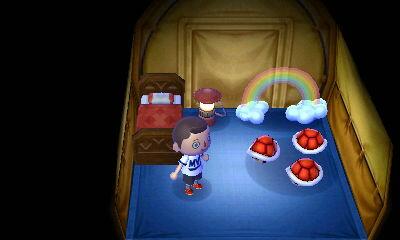 15 minutes in and I’m already a hoarder.

A game like this has no business being fun. There is no real story. You’re mistaken for the new mayor of a Podunk town and it’s up to you to make it flourish at your own pace. The closest game I can compare it to is Harvest Moon, and like Harvest Moon, it is insanely addicting. Sure, you basically do the same thing every day, but every day you get closer and closer to your next house expansion or complete museum exhibit.

The core gameplay of New Leaf remains mostly unchanged from previous Animal Crossing titles. After getting acclimated to your new lifestyle, your main goal is to collect Bells, the game’s currency. You do this by fishing, bug catching, collecting fossils, and selling anything you can get your dirty little mitts on. With said Bells, you can buy new tools, furniture, and most importantly, upgrade your house. However, you can also donate various things like fish, bugs, and fossils to your town’s museum, and it’s really rewarding to see all of your hard work on display. 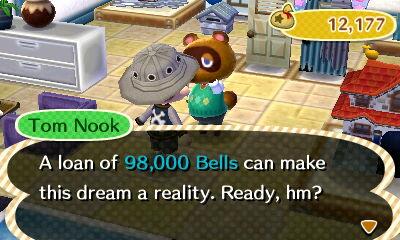 Pay him, or he’ll break your thumbs.

Then there are the animals. You can regularly interact with your townspeople, and every so often they will ask if you want to buy something or run a simple errand for them. Somehow getting a random prize for delivering a package never gets old. No matter how many times you get burned with a crappy item.

The main draw to New Leaf is that you are the mayor. You now have complete control of where things go around town, and this brings a whole new level of customization to Animal Crossing. As mayor, a large part of your job is creating public works projects. That essentially means you will be choosing where things like new bridges, campsites, and other town necessities go. This makes your town really feel like your own and not a randomized map that you’re thrown into.

The other great thing about being mayor is choosing a city ordinance to fit your play style. I have a 9-5 job, so most of my virtual life happens at night. As mayor, I chose for my town to become a night-owl town. This means villagers stay up late, and shops close at midnight instead of 9 or 10. Other ordinances include things like keeping the town tidy, and making the buying and selling prices higher. It’s a great way to accommodate players who are on different schedules. 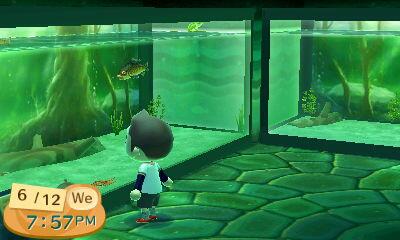 My favorite part of the museum.

When you’re not sitting in your comfy house all day, you can visit the tropical island. The old mayor set up shop there, and you can get special items, fish, bugs, and fruit that you won’t be able to find in town. There are also a few minigames you can play that net you a special kind of island currency to spend on the local swag. This adds some variety to the game and also lets you experiment with the new wetsuit, which lets you dive for even more collectibles.

Multiplayer has also been revamped. In addition to visiting other towns locally and online, StreetPass has been implemented in New Leaf. The main function of StreetPass is to allow you to view someone else’s home if they connect with your 3DS.

In addition to all of the new things New Leaf has to offer, the gameplay in general has been streamlined to make it a much more enjoyable experience. Small tasks like selling a bunch of items at once and stacking items in your inventory lets you play at a much quicker pace. This is nice because there are a lot of things to spend money on in this game. The museum has also become more efficient. Now you can have the curator identify multiple fossils at once, and you can donate a bunch of stuff at the same time so you don’t have to hear him talk about every single thing you’re dropping off. 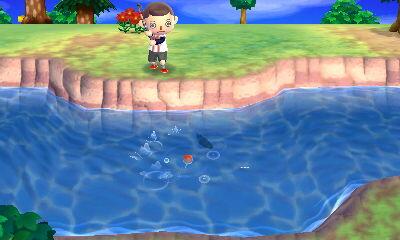 I have you now!

They even made play coins (the coins you get when you walk around with your 3DS in sleep mode) usable in New Leaf. Instead of getting a new puzzle piece with them via the StreetPass program that came with the handheld, you can buy a fortune cookie and trade the fortune for an awesome Nintendo themed item. Another nice touch is the ability to take screenshots and post them via the 3DS browser using your Facebook, Twitter, or Tumblr accounts.

Things haven’t changed much graphically over the years for Animal Crossing, and that’s not a bad thing at all. The cartoony, oversized look gives the game its charm. However, the town has been changed so that most of the shops are located on one main street directly north of your town, giving you more room for public works projects. Also, there’s nothing really like the music of Animal Crossing. It’s usually very simple, but it’s always a perfect fit.

I’ve put more hours than I care to admit in the short time I’ve had New Leaf, and I feel like I’ve barely scratched the surface of what the game has to offer. There are so many new things to collect, and since certain fish and bugs only appear during specific seasons, this is a game you’re going to come back to months down the road. The only negative thing I can say about it is that new residents choose where they want to live and demolish the trees on their property whether you like it or not. I remember Animal Crossing on the GameCube being an enjoyable experience, but New Leaf takes it to a whole new level. Now that I’ve finally got this review out of the way, I’m going to go back and play it some more. I’m almost done with my next house payment!