It’s rare that we see an actual, honest beat-em-up nowadays. Gone are the times where you could grab a friend and brawl through a detailed city street or gothic castle. Franchises like River City Ransom and Battletoads are a thing of the past, and not necessarily without good reason. As time  moves on, does taste of gamers. It’s difficult to sell an adventure where the entire plot centers around punching identical enemies for eight hours straight. Still, there’s a quiet comfort that comes with the mindless struggle of classic right-walking games like Golden Axe. When done well, they offer a rich and engaging experience like 2010s Scott Pilgrim vs. The World. Luckily, Dragon’s Crown manages to successfully inspire those classic feelings by being a game rich with atmosphere, depth, and lady bits. 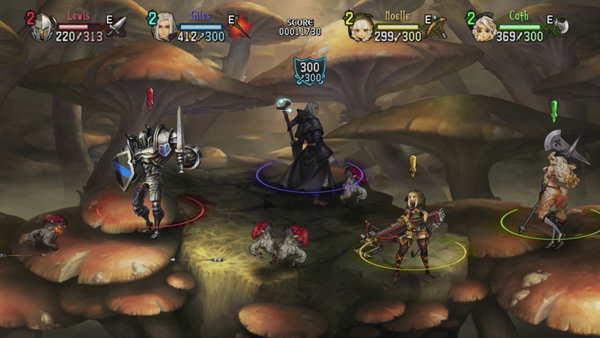 Dragon’s Crown follows you as a mysterious adventurer who stumbles into a kingdom full of intri—you know what? No one cares. During the game the plot is dictated to you by a monotone psuedo-Englishman that does little more than delay your next chance to slam an axe into an orcs face. Loose at the best of times, the story is barely worth mentioning. Where ATLUS’s newest game excels is in the gameplay and art.

Every backdrop, enemy, and character in Dragon’s Crown is unique and crafted with an exceptional amount of love and dedication. The mission select screen on its own would make a beautiful posted to unfurl across any wall. There are plenty of times during your first playthrough where you’ll stop just to look at the scenery, and for a beat-em-up that’s something special. This is also the first Vanillaware game (of Odin Sphere and Muramasa: The Demon Blade fame) that has been released in true HD. If this is any indication of what the studio can put out from an art perspective, we are in for some amazing looking games in the future.

At its core, Dragon’s Crown is a loot game. Think side-scrolling Diablo. You navigate through dungeons, fighting monsters until you reach a boss. Once you fell the beast you are treated to an experience boost and a handful of loot. The experience goes toward leveling up one of your character’s unique skills or generic skills from a list. Each of the six characters plays differently,  and figuring out your play style is part of the fun.

In order to claim your loot, however, you must first have it identified. This creates a dangerous gambling aesthetic in which a player must guess which of the items they’ve received should be invested in. You can determine this by examining key ranking and level information displayed in the mystery item’s description.

On the PS3 version of the game, local multiplayer is available from the start—which is primarily how you want to play. That makes it all the more disappointing  when you realize online multiple doesn’t unlock until you complete the game once on your own. This is a major problem on the PSVita, as the online mode is the only coop available. That being said, the Vita version excels in the control department. In order to access treasure chests and secret doors, you have to navigate a curser over the object and click. Yes, that’s right, you have to basically work a mouse over the object with your controller. This is SUPER frustrating on the PS3 and an incredibly strange design choice, but on the Vita you can simply touch the object with your finger. Dragon’s Crown supports cross save but not cross buy, which is a disappointment in our eyes. 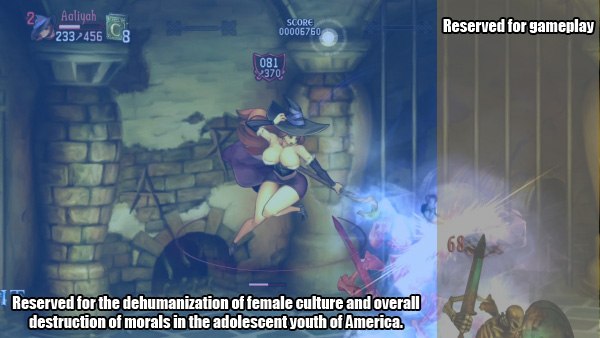 There’s been a lot of talk about the portrayal of female characters in Dragon’s Crown, and most of it is due to the ridiculous character design. We just want to go on record saying the we support the art decisions in this game. Yes, they highlight specific features on the male and female body, but they do it as a satirical take on the genre, time period, and art of the era. Search Classical Boroque Art in Google and you’ll find the exact art inspiration of this game. Even the sometimes embarrassing sexual poses the female character take in the high-detail character art is torn from Boroque pieces. The rest is stripped straight from hyper-sexualized art from rock and roll culture like Heavy Metal magazine (don’t Google search that). It’s all put in place to create an atmosphere of ultra-barbaric animalism that is exemplified in classic games like Golden Axe.

If you want to bark at me as the reviewer for being a misogynistic male who’s opinion is irrelevant because  subconsciously I only really want to subjugate women, then go ahead. I can say that my wife played through a  portion of the game and she enjoyed the artwork for its flamboyant take on the human form and liberalism with the human body.  Personally, I just enjoy seeing something different. As much as I love skinny, white, bald, male protagonists it’s nice to see an over muscled, short, stout dwarf kicking ass once in a while.

Dragon’s Crown is a solid game hampered by a few poor design choices—none of which relate to its art direction. There is a fairly deep, fun, multiplayer loot game hiding in the disguise of an old-school beat-em-up. The main story only lasts about six-to-eight hours, but with the multiple difficulties, characters, and side quests the game will stay relevant for much longer. The experience is worth it just to stare at the detailed landscapes and hand drawn character art. We give Dragon’s Crown a B for bust… er, we mean Worth Buying.