Is Conan: The Cimmerian worth buying? That’s a tricky question. Not because of the game itself, but due to the fact that it’s available for free as abandonware. By today’s standards the game certainly isn’t that impressive. But back in 1991 when the game was made it was jaw-dropping. It certainly dropped mine. 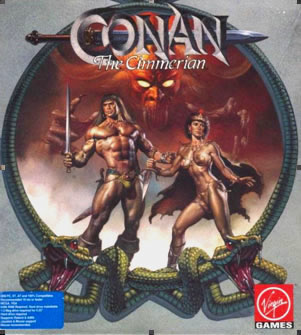 This game was—and still is in my opinion—the definitive Conan adventure. It has everything that made the Conan series great, a rich story, unique characters, evil sorcerers, monsters, fiendish traps, thieves, thugs, scantily clad loose women in need of rescuing, sinister cults, swords, graphic carnage, and lost cities. . . you name it. If it was in the series, sure enough it would be in the game in some form or another. This game is a love letter to the series’ fans.

The Cult of Set has raided Conan’s village killing its inhabitants but most of all killing Conan’s beloved. Conan begins an epic quest for revenge to take the head of the cult’s leader, Thoth Amon. The game isn’t about saving the world. As Conan, you are out for blood.

The game is an action adventure with a moderate helping of role playing elements. There are three main screen types in the game. First is the world map, where you can move Conan to certain selectable destinations by clicking on them. Second is the Area/town map, where you can move around the streets and enter various buildings such as houses, shops, and inns as well as interact with NPC’s. These interactions vary. You can have conversations, purchase items, or initiate a fight. Finally there is the interior/combat screen where you duel with your enemies and loot items. 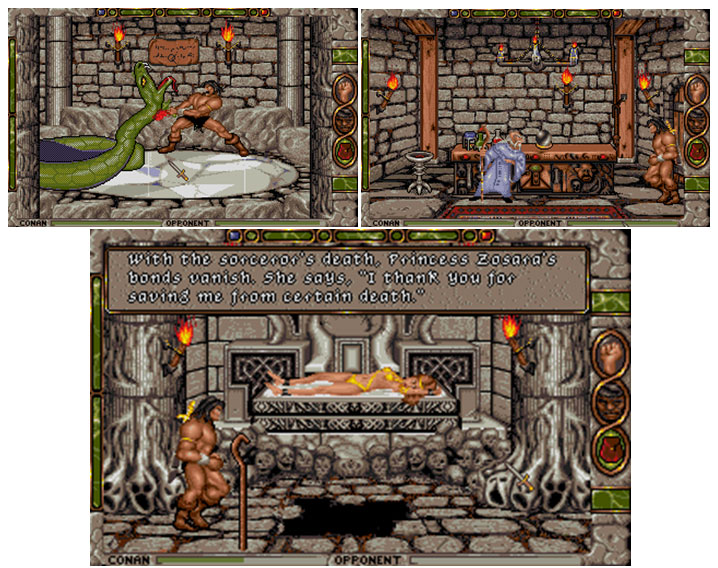 The city of Shadizar servers as the focus and hub of your adventure. You explore its streets, catacombs, residences, shops, inns. You can and will perform various jobs for the NPC’s you encounter yielding various rewards such money, information, valuable items, or stat boosts. You can purchase various items, weapons, and tools from the shops required to explore new areas and progress in the game. There is a novel haggling and bartering system used in the game where you can haggle over the prices of the items you are buying and selling. Almost everything you find in the game has a monetary value and can be sold to the right merchant.

There are temples in the city that are used as sort of as staging and regrouping grounds, where you can store your excess items you can’t take with you. These are the only safe places to leave your items. Also you can use them to store extra money here but I don’t recommend doing this unless absolutely necessary. The priests subtract offerings from the money you leave. You also receive quests from the priests and receive healing.

You are able to purchase training for different fighting styles to make you more effective with them. Your main weapons are various swords. There are three fighting styles Swing, Chop, and thrust. Each one is effective against, and necessary to defeat certain foes. More about this later… You start the game with only the Swing style. But as you earn money you’re able to purchase training from a teacher to learn and increase the effectiveness of each style.

As I said you each style is effective and necessary to defeat certain enemies. Here lies the game’s biggest gameplay weakness. That means combat amounts to a big paper/rock/scissors game where in order to defeat an enemy you must use the proper sword, sword technique, and must be trained strong enough in that technique. The combat in this game is very dull and repetitive. All you do is draw your sword and hold down on the attack button until one of you is dead. Some of the enemies such as bosses do have a puzzle element to them though. Meaning there is a certain puzzle or trick to beating them. But all this amounts to is a gimmick. Once you learn the trick it takes hardly any skill to beat them.

The game was made for two platforms, DOS and Amiga. It was released on eight 5.25 floppies, six 3.5 floppies, and CD-ROM. The game also featured a new option for computers at that time, the ability to install to the hard drive. Not all computers could do this though. So it was also playable straight off the disks. Depending on the format this meant waiting on the computer to read the CD or swapping the required disks in and out of the floppy drive as it loaded the info off of them leading to extremely long wait times an average of 5 minutes.
This was made all the more painful by that fact that it had to be done practically every time it loaded a new screen. The game supports two graphics modes: 16 color CGA graphics, and 256 color VGA graphics. The Graphics are good in CGA, but they are drop dead gorgeous in VGA. They are a bit low res by today’s standards, though they’re still pretty good. It has two options: midi soundcard support or none at all. The sounds aren’t really that impressive as the game only played music and no real sound effects. This game will not run properly with in XP or Vista without a DOS emulator such as DOSbox. 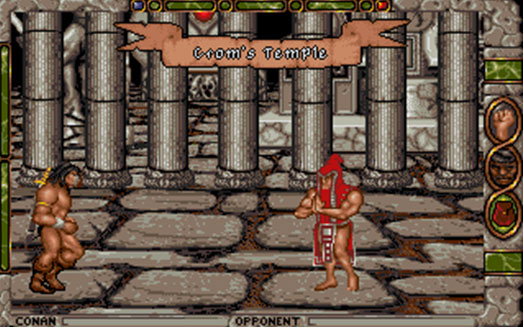 I wrap up by answering the question I posed at the beginning. Is the game worth buying? Yes, especially if you are a Conan Fan, under the condition you’re able to find it with the box intact and it has the manual along with the map of Shadizar. The manual is filled with beautiful artwork and tons of information about Conan and his world. The manual itself is a piece of art. It also contains the answers to the Riddle of Steel. The Riddle of Steel is the game’s copy protection system. When you start the game it requires you to answer the Riddle of Steel. You do this by inputting the series the runes at the top of the page that is requested. If you are unable to do so the Game becomes a demo instead of the full game. If you already own it, the game is worth dusting off and giving it another playthrough… even if just for old times’ sake.

I hope to cover Snatcher for the Sega CD in my next review. But that is another story…