So just recently got myself an Xbox 360, and the first game I bought for the thing was really the one reason wanted a 360 in the first place: Fable 2. I had unfortunately bought into all the hype of the original Fable, and so with Fable 2 I vowed to myself that I wouldn’t let it happen again.  In the end I realize that I probably could have ignored that promise and still be able to enjoy the game, but I’m still very glad I made it. 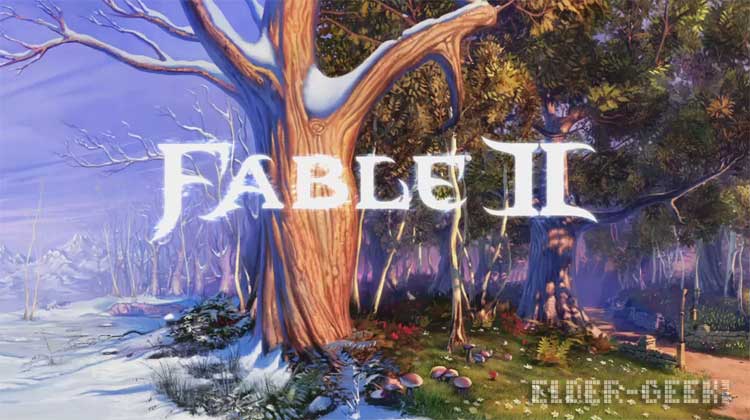 Fable 2 is all about choice. For example, you start the game as a young orphan in the streets of Bowerstone; the capital city. In this intro sequence you’ll be asked to acquire 5 gold coins and 5 wanted contracts, and how you go about obtaining these will be decided by moral choices. The effects of these choices won’t be felt immediately but will echo into adulthood. This is how the world of Fable 2 works –quite realistically I might add—the only immediate effect of your actions is the increase or decrease of both your purity and morality meters, which effect how the world at large reacts to you. But more importantly decisions also have outcomes in the main story of the game, and ultimately the ending.

Cleverly you’ll see visual indications of your current morality and purity stats in both your character and your dog.

At the start of the game you are known as Sparrow, you and your orphaned sister decide by the convincing of a mystical old lady to buy a music box from a local rare goods vendor, which is why you need the 5 gold coins. This is no ordinary music box however, as it is said to be a magical trinket from “the old kingdom,” but just when you and your sister are about to reap its magical rewards it vanishes in thin air. Shortly after this event a peon of Lord Lucien the mayor of Bowerstone, is at your doorstep. You are then rushed up to Fairfax castle to meet with Lord Lucien. It turns out that Lucien knows a great deal about this mystical music box, and has more questions than the two youngsters could possibly answer. Eventually he finds out that the two of you are “heroes”, legendary warriors with the power to wield magic, also known as the chosen. In a panic he decides to kill both of you. Your sister dies and you barely escape. You are then taken in by the mystical old lady and raised in a gypsy camp. Years later after reaching adulthood you are tasked with stopping Lucien’s evil plans and avenging your sister. This is where your quest starts. The story isn’t Oscar material and has its fair share of clichés, but it does a good job at motivating you and it’ll keep you interested and engaged at all times.

I set out to be the most evil and corrupt SOB possible. At the end of the game I owned the entire town of Bowerstone, lived in the Fairfax castle with my undead wife and had maxed out all my stats to become a tall, brutish, demon. And all I had to do to achieve that was mercilessly slaughter thousands and selfishly deny world peace and prosperity in favour of mountains of gold. I’d like to suggest that this doesn’t reflect my personality the slightest, but seeing as I do pretty much the same thing in every RPG that gives me the choice; perhaps Peter Molyneux is on to something. 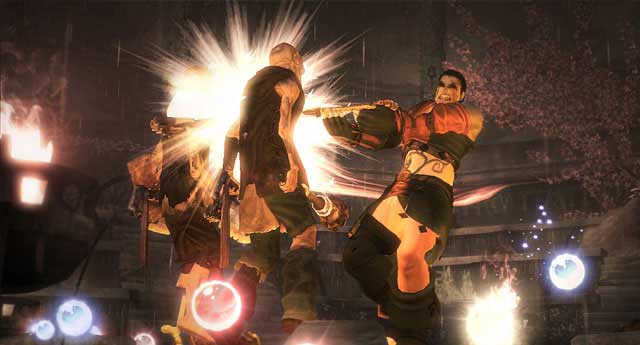 Graphically the game holds its own…It won’t blow you away, but the art design more than makes up for that.  The hallmark moment of wonder in this game is definitely the sunsets – which will easily make you pause, but after seeing 50 of them they become more annoying then wonderful. Where the real production value shines through though is in the voice work and sound design. Unlike similar RPG’s you never notice that some villagers have the same voices, in fact it’d be hard for me to confirm that statement. The writing is top notch and genuinely preformed, giving the game a real immersive quality. The music is also very iconic and memorable; every time I paused the game chills.  Since this is my first real 360 experience I’m not sure how noteworthy this is, but I felt like the loading screens where unnaturally long and frequent in this game, even after I installed it to the hard drive.

Fable 2 is an RPG. Because of that you might expect to shift through menus upon menus of stats, but luckily that’s not the case—not that stats aren’t appealing in their own right. No, Fable 2 takes a more circuitous approach. You gather orbs to upgrade spells and abilities, and everything else is done in the background, free from your concern. There are basically 3 types of orbs (aka points) in the game, each has a specific playing style attached to them and the more you use one style the more orbs you get for that style.

You can choose between or combine melee, ranged and magic combat, but towards the end of the game you’ll have enough points to max out every style. Melee is your standard fare button masher, with an added depth. The enemy will frequently block melee attacks so timing is everything in this mode, you’ll want to make sure your attacks actually do damage, but at the same time you don’t want to leave yourself open to attack. Later in the game you also get new and faster combos as well as the ability to counter attack similar to Assassin’s Creed’s counter attacks. Ranged combat is at first pretty boring, you simply point your character towards the enemy to auto lock-on…usually 5-6 shots will kill them. After a few hours and upgrades though, you’ll be able to manually aim in first person and you’ll also have upgraded your damage and speed. This is when the ranged combat truly shines, at some points I used it exclusively to pick off enemies from afar and blast those foolish enough to get closer into oblivion. The magic seems to be where most of the focus has gone. Every spell has two modes, the targeting mode lets you aim at specific enemy and unleash the spell on solely that enemy.  While the area of effect mode expands a circle of effect around you, every hostile character within the circle will be affected. Every spell also has 5 tiers which you earn through upgrades; to cast a tier 2 spell for example you have to hold down B long enough that it’ll charge up to a class 2 spell. You can customize which spell should be used in which tier, and once you get enough spells you’ll find the most effective combination to use on different enemy types. Your dog can also attack, and you can find or purchase books to upgrade his stats, but most of the time he’ll just get in the way. I ended up having to heal him after almost every battle. Overall the combat in Fable 2 might seem straight forward at first, but it has a surprising amount of depth and makes for some really long lasting appeal.

The world of Albion is filled with all kinds of people and monsters, some are friendly—others…not so much. Fable 2 has everything from Hobbles; small cave dwelling murloc sounding gnomes, to giant rock and tree golems. During your adventures you’ll encounter several of these beast as well as human opponents, they are all pretty easy to take down and require little strategy (magic always works). But once in a while you’ll run into the giant miniboss golems, to take these beasts down you have to shoot tiny weak spots around their body—much like any Zelda game. Navigating the world is a breeze, you always have a golden thread in front of you showing exactly where you need to go, and if you’re too lazy to do that you can always just teleport to your quest location. Very often you’ll see your dog run off with a “treasure” or “dig spot” mark above his head, this means that he’s found something and if you follow him it’ll lead to free stuff, if you don’t he’ll eventually stop barking and join you at your side again.

Another big part of the gameplay is of course the social interactions you make. This can have a big effect on how well you do in the game. If say a shop owner likes you enough he’ll give you better prices, letting you buy more and better items and potions which directly affect how easy your next mission is going to be. You can go about the game in a manner of different ways, if you play the game as a good and selfless character people will generally like you. But if you—like me— went with the easy and evil lifestyle; everyone will inherently hate your guts, what you have to do then is to convince them otherwise. You do this through expressing certain emotes, the effects of which are completely arbitrary. With enough practice though you’ll figure out which emotes work on certain people.  When in doubt you can always just give them a diamond. This system also echoes over into quests, where you’ll often be asked to convince a person to follow you to a certain location. You can achieve this either by scaring/threatening them or making them like you.

The high point of this social gameplay is getting married and having a child, something that is disturbingly easy in this game. Do enough “he-hey!” flirts in a row and it’ll make any woman (or man) melt in your hands. All you need to do then is go out and get an engagement ring, buy a house and lure you’re newly beloved into unprotected sex. And voila there is now a crib with a newborn child next to your bed. After that I found that family life was largely irrelevant, and as long as I kept my better (undead) half happy with a ridiculously high daily household budget I could pretty much ignore her and the kid.

So to sum it all up Fable 2 is an absolutely incredible game. It does have its problems, but in the end the good by far outweigh the bad. The game still hasn’t lived up to the initial promises made by Peter Molyneux for the first Fable, but I honestly find it hard to believe any game could. It’s a good value. I finished it in roughly 20 hours, but you could easily stretch it out to 50. I am really glad I didn’t hype myself up for this title, because although I would still enjoy it, I wouldn’t have enjoyed it nearly as much.

Side note: Fable 2 does have an expansion pack out on XBLM for 800 points right now called Knothole Island; I didn’t play that for this review, but expect a mini review on it in the future, as well as any other substantial updates—to any games.