Varrigan City has been taken over by terrorists. They’ve cut off all of the city’s connections to the real world. It is now the stage of the game show Death Watch, where the contestants must kill each other to survive. The surviving citizens of Varrigan City are now contestants in this brutal game. It is a mad world indeed, and you, Jack, must put an end to the madness by killing the competition as grotesquely and creatively as possible.

In MadWorld, you take on the role of Jack Cayman, a man with a prosthetic arm that somehow contains a retractable chainsaw, and must fight your way to the top of the competition through a series of timed levels (30 minutes apiece). The game plays like a beat ’em up. You must fight your way to progress through the levels, but unlike beat ’em ups where you basically punch and kick your way through enemies, you must be resourceful and find weapons or hazards throughout the level to eliminate the enemies within. Simply slicing someone in half will earn you some points, but slamming a tire on someone, shoving a few signposts into his skull, and then finishing him off by impaling him ass-first on a large spike will earn you about 4 or 5 times as many points. Roughing up an enemy until he is weak can allow you to finish him off; these kills can be rewarding but also cringe-worthy at the same time. 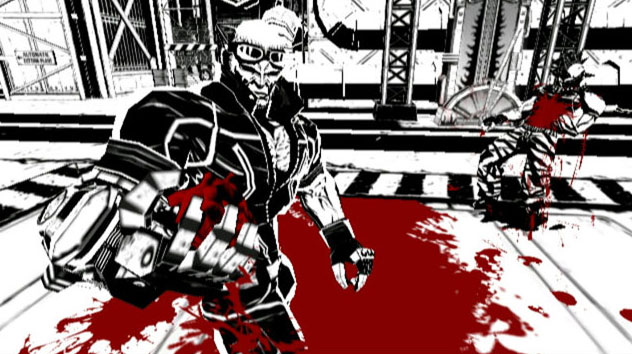 When you earn enough points, you activate a “Bloodbath Challenge.” Whenever you start a challenge, you are instructed on what your objective is in a short and very funny cut scene involving the Black Baron and his girlfriend Mathilda. These little challenges include Man Darts, where you use a baseball bat to swing at your enemies and slam them into a giant dart board. There is also the Turbinator, which involves you to toss competitors into a jet turbine, resulting in a bloody mess. These challenges are very unique, and will most likely have you laughing and cringing at the same time.

After earning enough points, you face off against the level boss. Sadly, the bosses are introduced in the most simplistic of ways by saying some one-liner and then immediately charging you. I’d have preferred a method of boss introduction like the one present in No More Heroes where you get some back story before and after boss encounters.

There are also some Road Rash-esque motorcycle sequences in the game, but aren’t very memorable. These sequences are very simple and just involve you riding and chopping enemies up. They are ridiculously easy and quickly get boring.

While the game is extremely violent and filled with gore, it’s over-the-top violence like what you’d find in Kill Bill Vol. 1. It’s really hard to not laugh at! 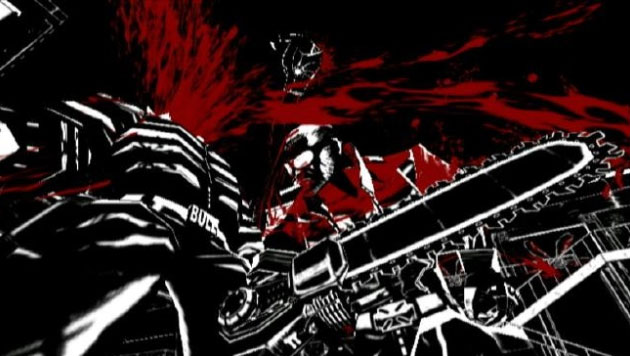 The controls in MadWorld are very good, although they can take some time to get used to. Thankfully for a Wii game there isn’t too much waggle motion with the Wii Remote. You use your chainsaw by holding the B button and swing the remote horizontally or vertically for horizontal and vertical slices respectively, A to punch, Z to jump, and C to lock-on to enemies. You switch weapons with the left and right d-pads and shake the nunchuck to do a backflip (which is very useful when facing a group of tougher enemies).

There is a small problem with locking on, since you have to hold the C button for 2 or 3 seconds (I can never really tell) and let go to successfully target someone. It’s not really a pain, but it can take a little time to get used to since most games simply have you tap the button to lock-on. Another problem with locking on is that you target the nearest enemy . It’s fine when there’s one or two enemies around you, but when there’s five or six guys and a mini-boss surrounding you, you’ll seriously hate the lock-on system in the game. Thankfully it’s not very necessary to lock-on to enemies and really only useful against bosses.

The game features a Sin City-esque art style and is in black and white (except of course the blood). The black and white graphics are very stylish and suit the art style very well. There is a lot of detail in the environments, character designs, and other parts of the game. Blood will stain the walls, but the enemies will disappear.

Every aspect of the sound in MadWorld is phenomenal: the voice acting, sound effects, and especially the music are great. The voice acting is very well doesn’t feel phoned in. Greg Proops and John DiMaggio, who both voice the announcers of Death Watch are deliver their comic relief lines perfectly and add a lot of humor to the game. The other characters’ voices are spot on as well especially the VA Jack and The Black Baron.

The story is very well-written and will keep you hooked, as it is pretty interesting. Sadly, the ending could have been better, but for a beat ’em up I feel like I shouldn’t complain. 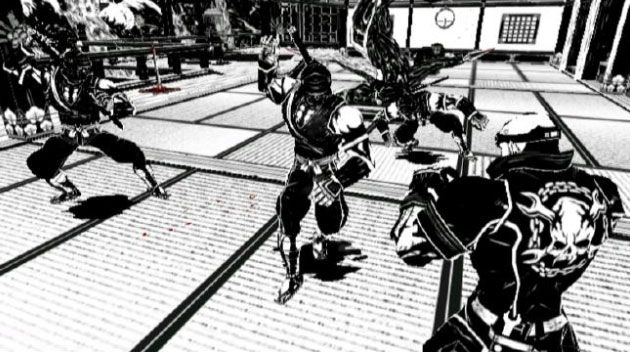 Although the game is only 4 to 5 hours long, there is some replay value. After completing the game, you can unlock the katana and double chainsaw weapons as well as a hard difficulty which gives new meaning to the term “frustrating”. There are also a plenty of Death Watch challenges that you can complete.

Platinum Games did a great job with MadWorld and I must congratulate Sega its efforts. I truly recommend that you purchase this game if you are looking for a new, unique, and fun experience for your Wii. It will definitely suit your hardcore needs.

About the Author: Arles Suarez has been gaming for the past 12 years. The first game he has ever played was Ultimate Mortal Kombat 3 (so as you can see he likes violence in games to be over the top and silly). His favorite games of all time are Mother 3 (which is an upcoming review for the site) and Conker’s Bad Fur Day. This is Arles’ first review for Elder-Geek.com.