I Love Super Smash Brothers! And I love Little Big Planet! So when I heard that they were bringing Media Molecule’s original creation to the Playstation Network, needless to say I was excited. I never played the original for PC, but from what I’ve heard, it was basically Super Smash Brothers only with realistic physics, HD graphics and a touch of Bruce Lee. What wasn’t to love? When I considered this game, I knew it wasn’t going to live up to Brawl, nor did I expect it to.  After all it’s a ten dollar downloadable game, so the bar was lowered to a certain extent before I even went in plastic fists a’ragin.

So did it live up to my self perpetuated HYPE! Well… kind of (*sigh*). The game has some really great qualities. But the game also has its fair share of problems. First let’s start with the good. The game is basically a scaled down Super Smash Brothers and has the same fun frenzied gameplay. Rag Doll Kung Fu (RDKF) looks fantastic for a Playstation Network game. The high definition graphics are well done, and the Havok Engine is used extremely well. This game has set the bar for what Kung Fu Rag Dolls should look like.

There is a sense of chaos within the game that is unlike many other games. It provides you with an interesting blend of button mashing and strategic planning. Like in Smash, objects appear that give you health, and allow you to hurl projectiles at your enemies. Unlike Smash, you have the ability to hang and swing from objects like Sackboy from Little Big Planet. The Sixaxis controls are used in clever ways. Characters have the ability to meditate and regain health by flipping the controller upside down. You can also slam the controller downwards to help clear the immediate area.

The game offers several original challenge modes such as “Acrobatics!” and “Get the Fish!.” “Get the Fish” is a combination of Capture the Flag and a fighter… only instead of a flag, it’s a fish. Now that’s INNOVATION! Take that Wii Fit!

Unfortunately there are some serious issues with this game. The first and foremost is the lack of online play. The game does have a pointless leader board that teases you with its online functionality. The game also lacks any form of a story mode, other than the ten challenges. The challenges are easy to beat, but difficult to perfect.  With these creative, stereotypical, Enter the Dragon-esque characters, I would have loved to see a campy martial arts story to go along with the game. The games largest focus is its local multiplayer functionality. Although you can substitute players with bots, the bots just do not adequately replace their human counterparts in skill… and smack talk. 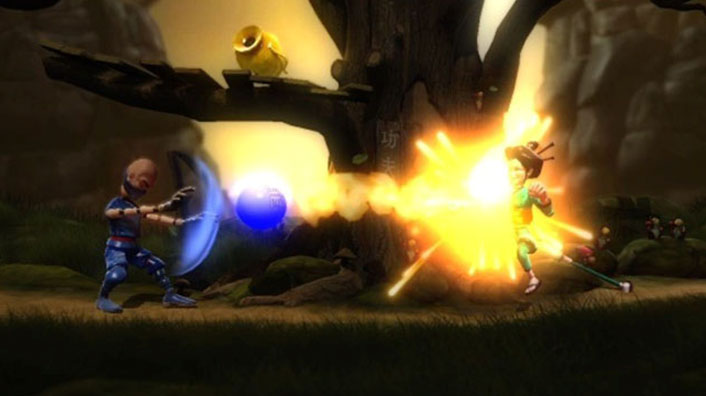 RDKF is a full game and not a quick marketing gimmick like some other titles available on PSN or Live. If you love Smash Bros. and think this is going to be Sony’s version of the game, you will be disappointed. The game feels a bit like going back and playing the N64 version of Smash Bros. only with a facelift. On the other hand, what do you expect for $10? If you have a great group of friends coming over who like campy marshal arts movies, then pick this title up. If not I think it might be one to pass on until they either patch it with online play, or drop the price.

One thing’s for sure, it has the best opening theme music this year by far! To hear the theme and watch the Rag Doll Kung Fu trailer, you can visit RDKF‘s official download page here.