To me there are two types of shooters, one with human opponents and one with aliens, monsters, robots and the like. The look and feel of these opponents often make or break the game, and the differences and preferences to one over the other can have a huge impact on whether or not I will buy the game. To me nothing beats the human element, and here’s why.

In a first-person shooter, the main character is often the enemies rather than the floating gun you control. The character design, animation, artificial intelligence and sound design are all incredibly important, and if a game masters one of those elements, people will forgive shortcomings in the others—just look at F.E.A.R.. I however—being a picky and stubborn bastard—require more. To me character design and animation rise far above the others in importance.

You see it’s the character design and animations that allow me the most to associate with the enemies I’m horrifically murdering. Call me sadistic but I enjoy watching a soldier stumble down a pair of stairs after I’ve shot his knee cap out. Because I know—or can at the very least imagine how painful that must be—that magical bliss is something I will never gain from doing the same thing to a 3 foot pink alien from Halo. I’m not a doctor, and my knowledge of the human anatomy isn’t complete, but I can still associate far more easily with your standard fare foot soldier than the twisted chimera of Resistance 2. 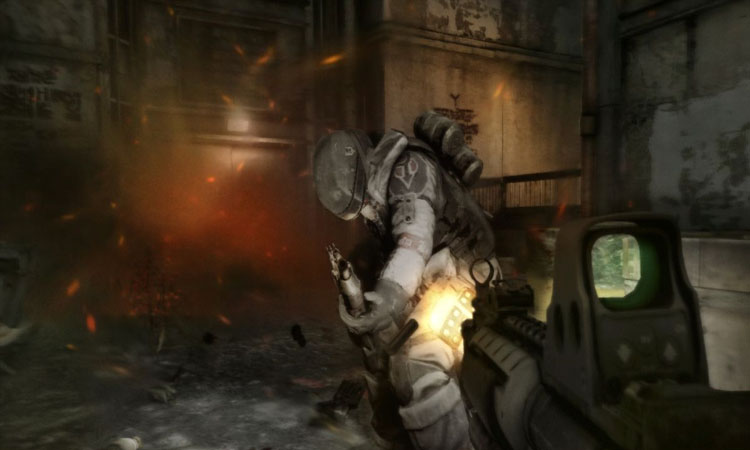 That’s not to say that sound design and AI isn’t important. Far from it. While character design and animations contribute the most to the enjoyable presentation  and immersion of the game, few things are as crucial to the gameplay quality as AI. If an enemy is crouched up behind a piece of cover and blind firing to keep you at bay, what do you do? Well if the game allows it you take aim and shoot his weapon out of his hand, and while he fumbles around on the ground to pick the weapon back up—you charge up and shot the poor bastard in the back. Or if the game doesn’t allow that you fling a grenade his way and watch him run for his life while you spray him down with a shower of bullets. Both of these events are designed to give you a feeling of satisfaction unrivalled in non-shooting games, and there only made possible by smart AI.

While good sound design gives you audio clues as to what you need to do to progress, or where the next enemy will pop out. Sound design also plays a large part to the satisfaction and presentation associated with defeating an enemy, in the above mentioned scenario where a soldier stumbles down a pair of stairs after he’s had his knee cap shot—that experience would be mute without sound. It wouldn’t leave an impression and the impact of the action would be lost. So while sound design might not be the most important piece of the puzzle it is still an essential one.

In third-person shooter games, this is all slightly irrelevant as the main character really is the main character, and that character is almost always human. But here’s a nice way to illustrate my point. In a TPS game there is one thing almost all gamers will eventually do; blow themselves up, just to see what it looks like. And most of the time I end up doing it multiple times just for the heck of it…its fun. Why is it fun? Because I enjoy watching my characters body “realistically” fly through the air and crash onto the ground in an awkward pose that undoubtedly would hurt like hell. I challenge anyone to play GTA4 and resist the urge to do this themselves if they don’t believe me.

But let’s get back to the point. To me aliens or monsters or robots or whatever just don’t provide the same satisfaction. They might have extra strange limbs that my imagination can’t account for, but for the most part it’s just the fact that I don’t know how their bodies work. I have no idea how an alien feels when he loses a limb, or how his corpse should animate as it falls to the ground.

Using non-human opponents does open up many doors though, and gives the developers a lot of freedom with game design which is why so many choose that route. If all the opponents in a game are aliens, then it’s suddenly not important that one enemy takes ten hits to the “chest” without dying. After all, who’s to say that’s where his vital organs are being kept, or that his skin isn’t dense enough to withstand your bullets. It also lets you play around with the games weapons and gives you the advantage of having really innovative and fun ways of dispatching foes, Resistance is a good example of this. And with aliens as enemies you can go to a wide range of exotic locales like spaces stations or foreign planets.

So clearly having non-human opponents has its advantages as well, one big economic reason for developers to go this route is the game rating. The lower the rating a game has often directly affects sales, and having non-human characters often plays a big part in deciding the games rating. 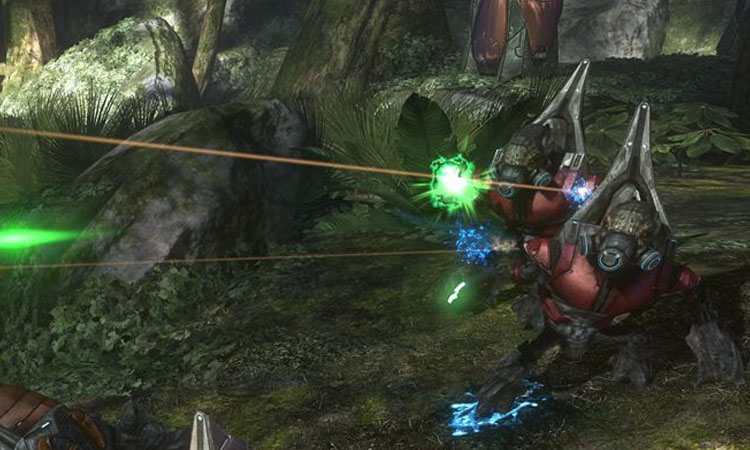 To me however, all this still doesn’t beat having human opponents and everything that follows. With human opponents it’s more likely that the game will feature realistic guns that are at the very least based on current technology (Killzone). It also means that the game for the most part will take place in realistic environments, where you can actually understand what the purpose of most objects are. For example, if you see a contraption on an alien spaceship, you usually have no idea what that’s for unless it’s somehow part of the mission objective. But if you see a contraption in an office complex you probably know exactly what that’s for, and that knowledge is invaluable for adding to the immersion of the game. And lastly, in a game with human opponents it wouldn’t make sense to have to shoot a guy ten times in the chest before he goes down, this makes some games easier…but the really great games have ways of compensating for that.

To me, all these things make the games more fun and immersive. That doesn’t mean that I don’t enjoy games like Halo and Resistance, it just means that I enjoy other games more. So in short; nothing beats the human element.

The opinions expressed in this commentary are solely those of Mats Paasche.