I first played the game of Lode Runner on the PC many years ago. My dad got some of shareware version from a buddy at work, which then got placed on our home computer. I have very fond memories of snagging all the gold and blasting holes for dancing monks to fall into.

Then I picked up the Xbox Live Arcade version of Lode Runner and relived some memories. Let me tell you, this version of the game doesn’t slack off. Essentially, you are a man, an adventurer of sorts, who is hell bent on stealing gold from monks. As you traverse different levels, you can blow up bricks to the left and right of you on the ground. Doing this will allow access to other previously blocked passages, as well as create traps for your pursuers. This is a mixture of a puzzle game and one in which your goal is to grab the gold and get to the door while escaping baddies. 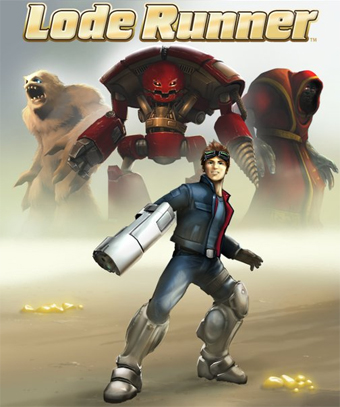 The graphics have been updated and look very slick on my meager 720p HDTV. For those of you accustomed to the sorts of games that Xbox Live Arcade has, the graphics are above average with fantastic animations. You Arcade newbies will be very impressed with the vibrant colors and fast-paced action of this game.

The sound effects are neat and the music is the usual repeating techno beats that many of these XBLA games use. To be honest, I either switch on my iTunes or jump into a party with friends and chat while I play this game, so the sound isn’t nearly as important. But, for those of you who enjoying submersing yourself completely, you will not be disappointed. 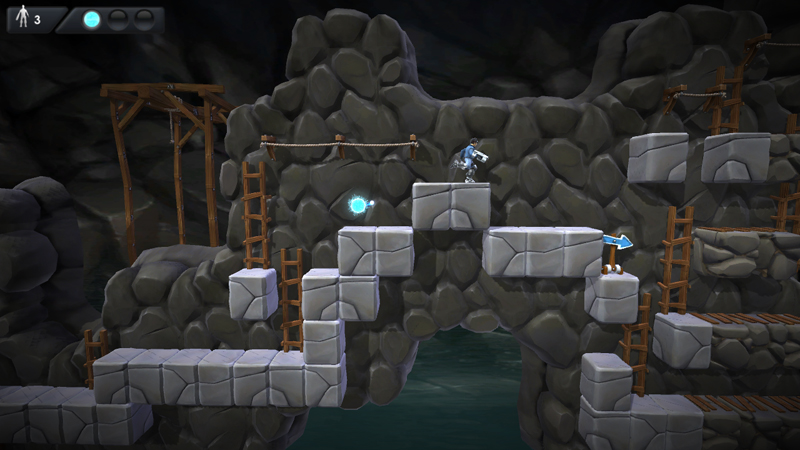 The game is packed with levels and has you travelling over five different worlds: ice, lava, jungle, mines and futuristic. Each of the worlds has a different type of enemy as well as a myriad of special bricks. For single player options, there are a few different modes: Journey, Hang On and Puzzles. These are broken down as follows:

Journey Mode – There is a total of 16 stages with 5 levels a piece, totaling 80 levels. Each stage takes you to one of the five worlds. As you begin each level, a score appears at the top and drops as time goes on. The faster you finish a level, the more bonus points you get. Between each level is a separate mini-puzzle where you can pick up glowing orbs, which give you more lives. When you lose all your lives, your score simply drops to zero and you begin again on whatever level you failed. Some of the levels near the end get quite tricky with more enemies or having to use special tricks to complete puzzles, but it’s worth it for the sense of accomplishment you feel upon passing a particularly difficult stage. 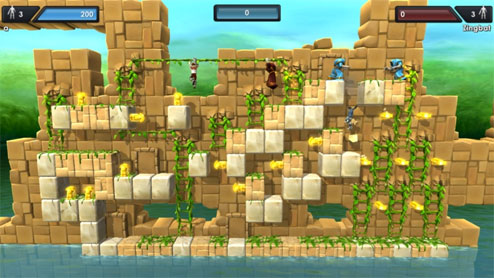 Puzzle Mode – I’m going to be honest, many of these 50 puzzles are just downright hard and will cause a lot of frustration. But when you play through a level 50 times and then, on that 51st try, something clicks and you say, “Ohhhhhhh,” there is such an internal reward that you will not be able to stop playing puzzle after puzzle. This game caused me to almost hit my breaking point, that is, when I break my controller by ripping it in half, but I have had so much fun with it, I simply cannot stop. There were also many times when I finished a level and then no idea how I actually beat it.

Hang On – This mode comes with 8 levels in which your ultimate goal is to collect as much gold and stay alive as long as possible to get either a bronze, silver or gold medal, or the ultimate prize, a diamond. Each level has gold littered throughout, but as time elapses, more and more enemies spawn on the level, making gold-collecting quite a feat.

As for multiplayer options, there is Co-op Journey, Co-op Puzzle and Last Man. Co-op Journey and Co-op Puzzle are exactly like their single player brethren, but with new levels and more people. Last Man is much like a game of team tag where you end up hunting each other down.

Finally, perhaps something thrown in to justify the somewhat high 1200 point price tag, Tozai included a relatively easy to use level editor where you can create your own levels after beating all of theirs.

So, this version of Lode Runner, with its 80 single player, 48 co-op and 50 puzzle stages stacks up pretty well against most of the other Arcade games out there. It has refined graphics and easy controls while providing hours of fun. For those of you who have played Lode Runner before, you will still enjoy this simply because of the sheer number of new puzzles. Anyone new to the game will enjoy the fast-paced action as well as the critical thinking and planning required for some of the more puzzling levels.

About the Author: This is Mike’s first article for Elder-Geek.com.