I have learned that mentioning this wonderful, addictive game around normal gamers gets one of two reactions: scoffs at the mediocrity of the gaming experience, or a complete blank face because the gamer has spent so much time getting to the “Prestige” level of COD4 that they have never heard of PixelJunk Monsters (*gasp*).

In PJM, you play as a small “tiki-turtle” creature; defending your babies in any way possible. I must admit, I was less than impressed by this description. But when I finally tried out the game, it began to grow on me. It’s nothing like Super Mario World 2: Yoshi’s Island. It’s more like Desktop Tower Defense.

Created by Q-games, the game uses the simplicity of medieval weapons to defend against waves of aggressing monsters. The graphics are childlike, as if the scenes were construction-paper cutouts glued onto a green background. Developed by Otograph, the music is soothing at first, but as you play the game more and more, you realize it feels anxious and pressured (neato side note: The soundtrack to PJM titled “Dive into PixelJunk Monsters” was the first audio album released through PSN). Both the music and the graphic presentation mold together well and help create an experience unique to PixelJunk Monsters. 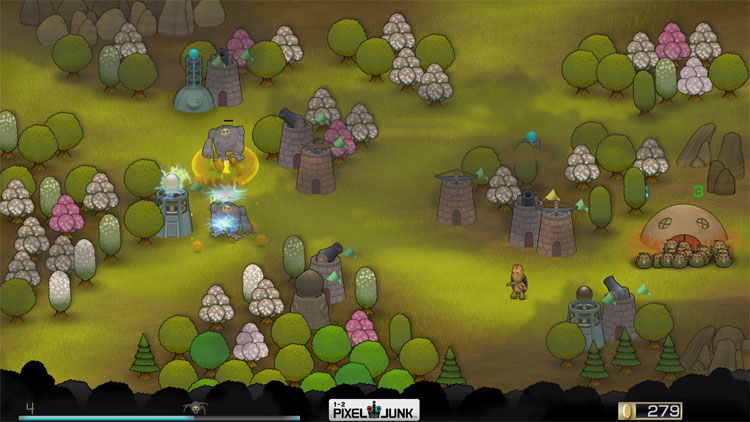 To help you defend your babies, there are a variety of defense towers. Unfortunately, there is an equal variety in monsters that have strengths and weaknesses against your defense towers. Like many real-time strategy games, it’s Paper Rock Scissors on a fantastic scale. The type and placement of these towers at the right time all need to be considered while defending your babies. While this can get cumbersome for the average Halo-player, I think that it develops multi-tasking as well as strategic planning. This is very important in this game, as changing your setup mid-level can cost you.

There are a variety of defense tower you can acquire for free: arrow towers, air towers, and cannon towers. Though useful, they are unfortunately weak unless fully upgraded, but they can still get the job done for a small amount of coins. The PixelJunk Monsters Encore expansion pack added the ice tower to the freebies. No one used them before the expansion. No one uses them still. The ice tower only slows down the monsters, but putting a tower in its place that actually kills the monsters is far more useful.

The fancier towers come with a price paid in gems found in the game. My personal favorite is the fire tower, because it is flashy and gets the job done on the ground monsters. But the most useful for me has been the hive tower. The hive tower, when fully charged is absolutely awesome. It sends out tons of bees that do this boomerang motion, hitting the monster and killing it instantly. Unfortunately it takes a really long time to charge, so it is especially ideal during two-player mode, where you can have one person charge the tower and the other do all the housekeeping. Or you can just cheat and play two-player by yourself and have one controller charge while you run around.

No one does that I’m sure…

However, PJM is smart when it comes to the towers. Because no one tower can destroy every type of monster in one fell swoop, it keeps you on your toes. I would save up the gems for fire towers, a hive tower (you can only build one in a level), and laser towers. Mortars can also be useful, but it can be cheaper and quicker to build lots of black-flag cannons. The useless towers—Tesla and Lightning—are expensive and I would just ignore them. It takes too long to charge them to make them worth your time. Its best to stick with the easy stuff so you can focus on the rest of the game.

The monsters are the deciding factor of using your chosen strategy. They are divided into ground monsters and air monsters. The website gives them all silly names that have to do with trees and do not describe what they look like. Ground monsters include these silly panda bear-looking creatures, spiders, and big metal-monsters that all often have fire-blockers or cannon-blockers. They are easy to beat, but often come in huge numbers and making a screaming noise when they die, sort of like the sound a rabbit makes when it dies (yes, I know what that sounds like, and I bet half of you do too).

The upcoming creature status bar at the bottom of the screen tells you if they are blocker creatures, but never what kind. This is frustrating and annoying, and I keep getting hit on it. If I put up a fire tower for the cannon-blockers, I’ll the fire-resistant bugs. I put up cannons and get the cannon-resistant monsters. If you play it enough like I have, you start to memorize the waves and it gets a little easier.

The air monsters include: dragonfly-looking creatures with pink wings, bats, and bloated bee creatures. The hardest are the bloated bee creatures. They look like a really round person, complete with clothes and wings. These are very tricky creatures, because sometimes they come in huge numbers, or sometimes just two at a time. I personally hate these monsters, but the make the game challenging. The best way to prepare for the variety of monsters is to think on your toes and be aware of what towers you’ve already built.

I think the strategy of PJM is what drew me in the most. I’m amazed how I can play the exact same level with the exact same tower placements and I can beat it the first time and not the second time. I think it messes with the timing of the monsters just right so that you are continually finding new strategies for the same level.

I cannot tell you how many times my boyfriend tugged the Dualshock 3 out of my hands because I had played the Snake Pit level from the expansion pack continuously trying to beat it. The big metal monsters got me every time. But PJM has become a bonding game for me. The two-player feature allows you to spend time with someone and still play the game. I loved the triumph of beating another level and giving my partner a high-five or some sort of small celebration. So this game is awesome because of the intense strategy, the variety of ways to conquer a level, and the ability to share the fun with friends with the two-player mode.

Anyone who has some spare time and a PS3 will enjoy this game. Warning: Not a game for lovers of the FPS or the RPG genres. This is just not that kind of game. Stay alert for more PixelJunk games. PixelJunk Eden is out, and lots of fun, although it can get frenzied, and Q-games is currently developing a new PixelJunk game, so practice on PJM and get ready for the new ones!

About the Author: Rachel Phillips is an Elder-Geek who currently attends Grand Valley State University. She is in her final year of Elementary Education with a dual major in Integrated sciences and English Language Arts. Rachel is a self identified classic “Gamer’s Girlfriend” who started off with more fun casual games, and has gradually progressed to the more hardcore world of Geekdom. She is also a living breathing Tolkien Encyclopedia and has read each of the Lord of the Rings books at least ten times. Go ahead and try to stump her, you can’t. This is her first article for Elder-Geek.com.