So let’s follow the timeline and start with the first game: Riddick: Escape from Butcher Bay. As it is with all Riddick games and movies, the main character is Riddick (played by Vin Diesel). People who aren’t familiar with the Riddick license know Diesel in mainstream movies such as The Fast and the Furious and xXx. In which case you’ll have more experience with the hot-headed alpha-male Vin Diesel rather than the cold and calculating character he plays as the role of Riddick: the role Vin Diesel was born to play. Diesel never does emotion well, but he does do cold badass well.

You begin the game captive inside a mercenary’s ship on the way to the ultra-max prison; Butcher Bay. Upon your arrival, a short tutorial will start (which I won’t spoil). Afterwards you’re introduced to the prison warden Hox and his right hand man Abbot (played by Xzibit). Once in the prison you’ll quickly discover that the balance of power does not support your escape plans. Your first mission allows you to change that. Escape is achievable in many different ways, but they all boil down to doing other inmates favors, some of them really fun and interesting, others—not so much.

The social interaction and game economy comes largely into play here and it works well. The economy functions as expected; do people favors and they give you credits. You can then use those credits to buy items like tools, drugs or knives from other inmates. The economy system lasts for a few short hours before you’re thrown into the depths of combat. You never really revisit these aspects of the game. It’s a shame because I felt it was one of the most interesting parts of the game.

The combat itself has three aspects: stealth, melee and shooting. The stealth is remarkably good in this game. So much so that I wish the entire game consisted of it. Even thought most of the combat can be done with stealth, there are times that force you to go head on guns blazing.

This game, much like Manhunt, is all about the shadows. If you stay in the shadows you’re virtually invisible. You can then use your advantage and execute sweet looking stealth kills that are equally satisfying every time. Should you be spotted you can retreat around a corner and hide in nearby shadows to lose your pursuers, as long as they don’t see you entering the shadows. It might sound boring, but after a while they give some of the guards flashlights. You have to do your best to stay away from the flashlight beams as you navigate through the shadows in order to reach the best strategic position to start the encounter.

The melee combat is straight forward. One shoulder button blocks and another attacks but how you combine these with careful timing makes all the difference. All the melee weapons in the game require different tactics because they all have different effects on the enemy. Some will stun. Some will weaken. Others will simply deliver a lot of damage.  The melee system works very well with dispatching standard enemies. It feels satisfying and surprisingly realistic. But…and you knew there’d be a “but”… at some points in the game you’ll be asked to eliminate boss characters with melee combat. This does not work very well—at least not on the normal difficulty level. The bosses simply have WAY too much health and it can take several minutes of stab after stab (in the face!) before they die. While you—the supposed “ultimate badass of the universe” —can only take a handful before you go down. This lack of balance completely breaks the immersion of the game. I had to go check an online guide to make sure I was doing it right…I was. Apparently I just sucked at it.

The shooting functions as a means to an end. That’s pretty much it. There’s nothing original or interesting about it, it’s just there as an option…one that I don’t really appreciate. An enemy will take several shotgun blasts to the chest and survive, but if you so much as graze the head he’ll collapse on the spot. The aim assist is too noticeable. You basically just have to point in the general direction of the bad guys and the curser will magically find them. The one really good weapon was the stun gun which incapacitates enemies instantly and silently. It also has infinite ammunition.

There are also some sections where you control a mech—a big walking robot with infinite machine gun ammunition and rockets. While in the mech suit you’re basically invincible and plow through everything in your way. It’s fun and changes the pacing a little, but when it’s over it definitely feels good to be back in control of the more sleek and agile Riddick.

In the end the game is a bit dated but definitely still worth purchasing. The stealth gameplay alone assures it. If stealth gameplay isn’t your thing, you might want to focus your time on the sequel: Riddick: Assault on Dark Athena.

I’ve decided to treat Riddick: Assault on Dark Athena as an expansion pack rather than an actual sequel, because the truth is there really isn’t much new in it. You start right where Escape from Butcher Bay left off; drifting through space in cryosleep when a merc ship moonlighting as a scavenger helps itself and wheels you in on their tractor…chain.

As the mercs are breaking into your ship, you find a convenient crawl space to hide in. When they finally make it inside you’ll be introduced to the games main antagonist: Revas, the merc ship’s captain. From there you move on to Assault Dark Athena, dispatching drones soldiers and mechs in an effort to escape the ship. You’ll do this by mostly going head-on, guns blazing. But there are a few sections where stealth and melee gameplay is handsomely complimented.

Among some of the new weapons of the game are the twin knives called Ulaks. These knives improve the calibre of the melee combat dramatically from the first game. Now you won’t have to hit someone 10 times in the face. Just a few very quick swings will drop your enemy. They also have some of the coolest kill animations I have ever seen. Other than that the melee combat is pretty much just the same as found in Escape from Butcher Bay. The stealth gameplay is only slightly changed. It’s much easier to quickly react to being spotted.

But most of Dark Athena revolves around shooting, and that’s pretty much identical to the original. You are basically stuck with the same selection of guns except for the S.C.A.R. gun, which makes the entire last half of the game a cake-walk. The only other addition is how you can pick up drones and use their grafted-on guns when in a pinch, but in the cases where you would actually have any use of this ability, you usually want to stay quiet and sneak instead.

The first half of Assault on Dark Athena is great, it’s consists mostly of stealth gameplay and the characters you meet are interesting and entertaining. But I feel like they blew it for the second half, you go around in the open blasting people with a freaking cannon—not very subtle. And the last boss has horrible game design written all over it, you will literally have no idea what to do unless you get really lucky or read a guide. In the end it doesn’t live up to the original, and that’s even after having just played the original now. 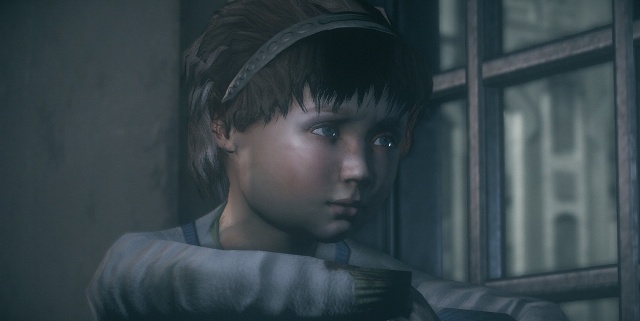 The package also includes a multiplayer feature with several modes, the most interesting being “Pitch Black”. In “Pitch Black” one of the players are chosen to be Riddick at the beginning of the round, and as the name suggest the level is in total darkness. The player playing as Riddick has the advantage of being able to see in the dark through the “nightshine” ability, but has very little health and has to avoid the other player’s flashlights. If Riddick is spotted he will die almost instantly, but then again if Riddick get’s close enough to an opponent to do a melee attack it’s an instant free kill. If anyone kills Riddick that player will become Riddick.

The few times I got to be Riddick I found it really entertaining and it appealed to the sadistic side in me, but when I wasn’t Riddick I found myself running around like an idiot almost never seeing anyone—let alone Riddick—before the match was over. You also have your standard fare of shooter multiplayer modes which can all be ignored since the shooting in this game is not exactly top notch.

So in the end I have to conclude that this game is worth purchasing, but only barely so. It’s got so much content that you’ll likely not want to play this game in just a few sittings, and if you like this sort of gameplay it’ll be more than worth it. This is a game with many different parts, and all of those parts aren’t polished to the same level of shine. But the parts that do shine, shine brightly enough for the rest.