Super Robot Taisen Original Generation Saga: Endless Frontier (or Super Robot Taisen OG Saga for short) is a Japanese RPG.  I really mean it.  This is about as Japanese as it gets.  The localization team made absolutely no attempt to ‘Americanize’ this title in any way.  But that’s one of the things that make this game so stylish.

You’re Haken Browning, bounty hunter and captain of the Zeit Krokodil.  Together with your android lady, Aschen Brodel, you must discover…something.  Frankly, I don’t get the storyline beyond who is a ‘bad guy,’ it’s also supposed to have something to do with a war that ended years ago.  You just move from world to world through ‘Cross-Gates,’ slowly building up your party to seven characters.  The problem is that androids, mechas, the Cross-Gates, and the strange crystals that seem to drain life from the world(s) are all called by different names depending where you are.  Needless to say, it gets confusing quite often.

In addition to that, characters will state the obvious, recount past events, and introduce other characters far too frequently.  I understand that it was probably done because this is a handheld title and therefore people might end up playing it on and off for several months, but a simple ‘recap’ system like the one in Professor Layton and the Curious Village or even a journal of past events and conversations would have sufficed.

The writing is witty in places, with most of the comedy coming from sexist remarks made by the men or catty remarks made by the women.  The female protagonist, Kaguya Nanbu, is constantly referred to by names built on her almost bovine breasts and the other women are often identified by other physical features.  Funny thing is they never seem to be offended. 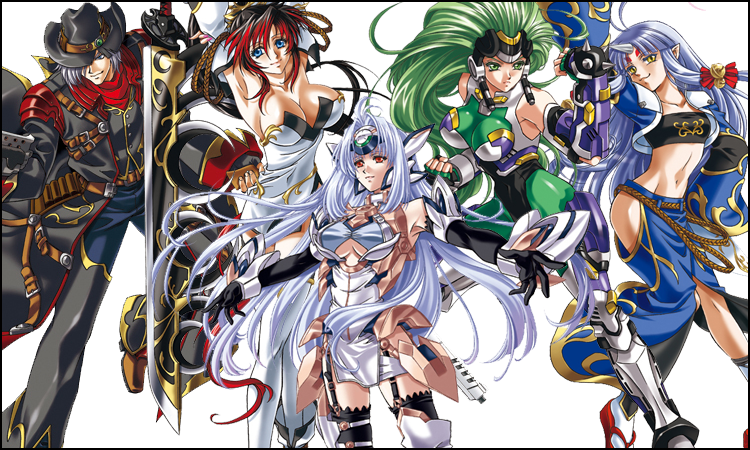 Now I don’t watch anime so I don’t know if its standard format to have every female be a bimbo, a bitch, or childish but that’s pretty much how those with two X chromosomes are represented in this game.  I’m not complaining, though.  But it is quite strange when a female character’s power has a direct correlation to how much skin she’s showing.  (And no, I’m not joking—during several female characters’ special moves, their clothes evaporate just enough to keep the game Teen rated.)  Essentially this game abides by the law that requires these types of titles to have hot chicks, robots, and hot robot chicks.

The two male characters, despite being accompanied by five females (two of which are androids) always run the show.  Haken Browning, wearing a black trench coat, a cowboy hat, and a futuristic six-shooter, is led almost entirely by his hormones, constantly being duped and swindled by anything that even approaches 36-24-36 measurements.  Reiji Arisu isn’t as easily distracted but he won’t hesitate to spank his female companion, Xiaomu, when she misbehaves.  As for the villains, they are all manly men, voluptuous women, or giant robots.

The thing that makes this game amazing is the battle system.  I’ve never encountered anything like it.  It’s turn-based with a battle order pre-determined based on the speed stat and you have three meters—HP, SP, COM, and the Frontier Gauge.  You have four front-attackers that you can control individually and four back-attackers who provide support when you need it.

We all know what HP is.  If you don’t, I’d like to know how you get Internet under that rock where you’ve been living for the past 15 years.  SP allows you to use ‘Spirits,’ which are character-specific skills that serve to heal or support your party.  Your COM percentage is what allows you to use items or attack with more potent items or attacks costing more COM.  The Frontier Gauge starts at zero each battle and gets filled by performing regular attacks, support attacks, chain attacks, and taking damage.  Once it’s filled, you can unleash a powerful Super Move.

At the beginning of each character’s turn, you’re allowed to spend all the time you want using Spirits or Items but once you make your first attack, you’re stuck there until your attack phase ends.  Each attack phase allows a character up to five moves whose value does not exceed 100 COM.  If you start your attack phase with less COM, you can’t attack as much.  You’re allowed to arrange the order of your five moves, picking and choosing from a growing list of skills.

The goal is to build combos.  You have to learn when each move ends so you can begin your next one before the enemy has time to perform a ‘Forced Evasion,’ which ends your attack phase regardless of how much COM you have left.  Attacks either knock an enemy upwards or bounce them against the left side of the screen with heavier enemies being harder to juggle and thus harder to combo.  The greater your combo, the greater the chance of getting Critical hits.

At any time during your phase, if an ally’s turn is next, you can perform a chain attack, essentially ending one character’s phase to start another.  Doing this increases the Frontier Gauge and keeps the combo meter going.  In addition to that, you can call in up to two support attacks during any attack phase by using your SP.  Support attacks are made by those in your back-attacker row, made up of three characters and one mecha called a ‘Personal Trooper.’  When you call in a support attack, whichever back-attacker’s turn it is moves on screen to perform a single move.  You can call support at any time—even during one of your own attacks.

Your success in battle relies entirely on timing and precision.  You have to know how high a certain attack will launch an enemy and if it will create enough of a window for a back-attacker to provide support without the enemy performing a Force Evasion.  You have to know the ideal time to end your first move and begin your second based on who you’re fighting.  It’s overwhelmingly complicated at first, but it becomes second nature before you know it and the game is kind enough to introduce new combat elements gradually.

The Super Moves that you can perform once your Frontier Gauge is full are definitely the best part of any battle, showcasing awesome animation that makes the DS seem like a PSP.  Combining the already fluid sprite animation seen in regular battle with dynamic full-screen animation like something out of an anime episode is truly a sight to behold the first time you see it.  It doesn’t get old either.

The graphics are excellent with 16-bit style sprites on the map and to scale drawings on the battle screen.  Cutscenes are written with drawn characters showing emotions and body language, moving in and out of the screen depending on who is speaking.  There’s voice acting, but it’s all in Japanese with characters yelling out the moves they’re performing and saying other things that I can’t understand.  The music isn’t anything spectacular, but it’s good enough to warrant the game being bundled with a soundtrack CD as per Atlus’ custom to spoil their fans with goodies.

On the whole, the game is a must-buy for JRPG fans.  Cross-overs with games like Namco X Capcom and the Xenosaga series will please fans of those titles and if you have even a remote interest in the anime upon which the game is based or if you liked the Super Robot Wars games on the Game Boy Advance, you should buy this game.  Its style, presentation, and gameplay are all top-notch and provide a unique and wholly enjoyable experience.  The entire game will take around 30 hours depending on how much grinding you do (though I have not needed to do so) and it is definitely worth the purchase.