Steps that need to be taken in order to truly enjoy Wheelman:

I didn’t do any of these things, that being said Wheelman did have its moments.

You are Milo Burik the Wheelman, as played by Vin Diesel. The game starts you right off as a getaway driver for a sexy female bank robber named….you don’t care. Everything you need to know about the Hollywood inspired story can be summed up in one sentence: You’re an awesome driver who works for the CIA, stuff happens, you’re awesome, cool and have tight abs. 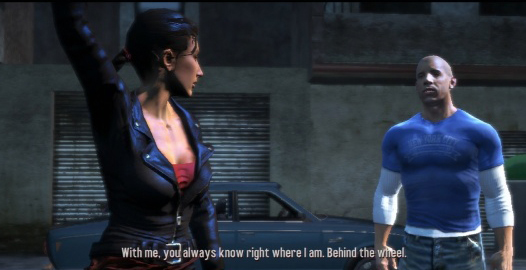 Most of the game is spent doing some mid level-gangsters bidding while secretly turning the local gangs of Barcelona against each other.  Apparently you’re supposed to acquire some sort of object for the CIA that is of “nation changing” importance, and this means rubbing elbows with some of the most stereotypical gang leaders you’ll ever see. The story is incredibly dumb and forgettable, but it doesn’t take itself too seriously and stays true to the Hollywood theme of the game. Milo almost never says anything during gameplay, and the few times he speaks during cut scenes he’s always quick and to the point. It’s therefore painfully obvious that Vin Diesel’s presence is only for commercial reasons, and not because he fits the part. I also wonder whether some dialogue was removed at the last minute, since at some points characters answer questions they were never asked.

Graphically that game looks respectable, but doesn’t really jump out of the screen, the city of Barcelona is very pretty and interesting to look at, but doesn’t really offer much in way of interaction. The miles of roads aren’t as impressive as some of its other open world competitors –not that it has to be— but I would have liked some more places to explore.

But the main reason for playing this game is the driving. It’s not a simulator and makes no sense at all, but it’s damn fun. All the vehicles are easy to control, and feel different enough that you’ll find a favourite quickly – there aren’t that many to choose from. The game features a vehicle melee system, where you can ram other vehicles simply by nudging the right analog stick in either direction. This makes your car immediately shoot off to either side slamming the other vehicle violently, repeat this enough and your opponent will eventually explode. . . you know . . . because that’s what cars do. You can also pull off super moves, like “aimed shot” where you go into a slow motion while manually aiming your gun at targets and blowing them up with a single round if you hit the right spot. There is also a move called the “cyclone” where you spin the car around and drive in reverse while doing the same thing. These moves are actually fun to pull off, but can get repetitive after a while. One thing that never gets old however is the “air-jack” move. The “air-jack” is where you leap through the air and “jack” a car in front of you.  That’s right you actually get out of your car while driving at insanely high speeds, you jump towards another car in front of you and steel it while it’s moving, that…is…AWESOME. 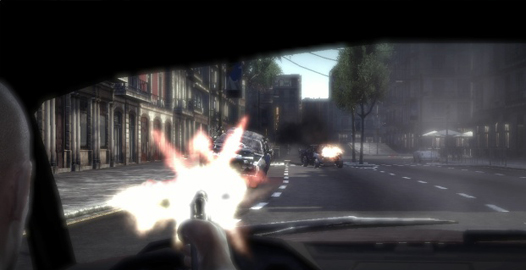 But while the driving is the games one saving grace, Wheelman also unfortunately features on-foot sections. Once in a while you’ll be asked to leave the comfort of your car and take out some gangsters held up behind cover. Don’t miss interpret, you don’t actually have a cover system in this game, instead you just awkwardly crunch down behind obstacles. All the enemies are bullet sponges capable of taking several hits to the head and upper body before finally going down. It’s not hard, it’s just annoying and bland. 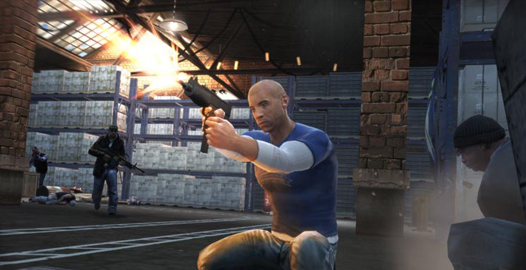 The on-foot sections also have countless bugs. The game acts as a third person shooter but the crosshairs aren’t directly aligned with where the gun is pointing. Because of this glitch you can shoot through solid concrete and metal objects that you’re currently using as cover. The lack of any kind of physics engine is also apparent. Rather than simply stepping over a long thin pipe in front of you, you have to walk all the way around it. They could have at least given us a jump button so those problems wouldn’t be as intrusive.

Luckily the focus is mostly on what’s good about the game. The campaign is more the enough to feed your appetite, and once that’s done you won’t be asking for seconds. In conclusion Wheelman is the perfect rental: you will never play this game twice. It’s short (7-8 hours) and mildly fun. If you do rent Wheelman, I recommend following the 4 points I stated earlier. It’ll make the game much more enjoyable.