Seasoned gamers, stylus lovers, your game is here. Big Bang Mini is very old-school in it’s premise and play-style, but it’s the decidedly new-school stylus-only controls that level the playing field for both newcomers and veterans. With a simple set of rules, and mostly-solid controls Big Bang Mini will recall the most frenetic arcade shooters remixed with some modern amenities to keep things fresh. 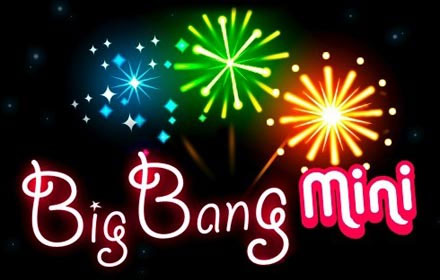 In Arkedo’s latest offering for the DS you take control of a geometric shape—let’s call it a ‘ship’—and in a top-down shooter fashion you must use your stylus to flick fireworks at foes on the top screen from the relative safety of the bottom screen. Once a foe is downed, a star icon floats to the bottom screen where you must maneuver your ship via-stylus in to catch it, eventually with enough stars you progress to the next level. At the end of each set of themed levels there is a final boss to test your mettle and any skills learned from his minions. It’s a simple concept that is executed with aplomb and a challenging ride for players who take it on.

The most compelling part of Big Bang Mini is the attack-and-defense nature of the title. When on the attack, you’ll encounter a wave of enemies and send a volley of fireworks their way, hoping to thin their numbers. If you bested one of them in your efforts you’ll head straight onto the defensive because the remaining foes have fired back at you, and your stylus will be busy guiding the ship to collect the felled foes dropped star. If that wasn’t enough, there’s one more bit that makes being on the defensive even more intense. If one (or more!) of your fireworks fails to hit its mark, ashes from your blast will come back at you alongside enemy fire. Both are effective at keeping you away from the stars, and both are equally deadly. Although in my experience backfire seldom caused death, it did hone my shooting skills if for no reason other than fear of punishment. 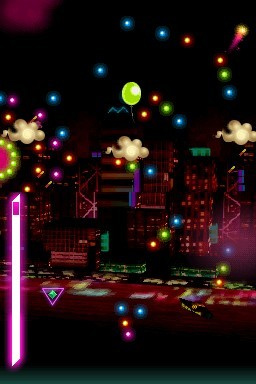 As the game progresses you gain power-ups. Some are level specific, and some—like the guided-but-weaker missile—are there for essentially the entire game. Most of them work well, and there are a handful of set-piece puzzles where you must use the power-ups to best. But outside of these moments, the abilities can throw off the balance of the game and turn a couple of should-be white knuckle moments into an unbalanced experience. The developers usually made sure to remove these situations by changing level-specific power-ups, but there are enough left in the game that it’s worth noting.

Another quip with the power-up mechanics is that you can rely on the shoulder-button to make your fireworks into guided, albeit weaker, missiles. In the later levels you encounter reflectors or invulnerable shields, and it can be difficult to get a clean shot through. In these cases you can spam your guided missiles, and it can take away a lot of the fun and balance of attack-and-defense. It’s a power-up that is given pretty early in the game, and it could have been saved for later, more appropriately difficult levels.

The stylus driven controls might turn off some, due to a somewhat unforgiving single-hit death restriction, but after the first set of stages players will find themselves quite capable of both moving the ship out of harm’s way, as well as being able to snipe foes handily. You will also need to use one of the shoulder buttons, depending on your handedness, as well as some drawn symbols to use power-ups. While the drawing portions can sometimes misfire or fail to be read, it’s hardly ever a deal-breaker, but it can lead to a handful of frustrating deaths. 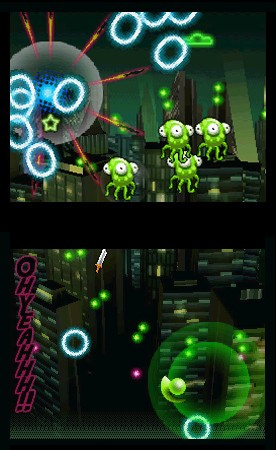 Graphically, the game pushes some really hypnotizing 3D backgrounds that scroll and flare to provide an exciting backdrop to the intense fluorescent action found on both screens. There is a ton of great artwork in the game too. Since the different areas send you around the globe you get a mish-mash of thematic enemies, anything from skeletons, to squids or dragons can be seen. Though they all are disjointed by nature, the art team did a superb job of keeping a consistency to the character designs. Because the game is about shooting fireworks, there is a lot of flashing on the screen, which without the proper state of mind can be distracting, and if you just woke up, downright jarring. In the audio department Big Bang Mini has an equally eclectic soundtrack to match each different zone’s theme, and while I usually find myself turning the sound off on the DS I wound up playing through Big Bang Mini with the speakers at full volume. That could also be due to the satisfying sounds the fireworks make as they whistle up to your targets and the crunch that ensues once they explode though, either way you’ll want to listen in.

For twenty dollars Big Bang Mini offers a very complete package. The arcade mode easily justifies the purchase clocking in at ninety levels strong. In addition to that there is a single-cart multiplayer mode, which can be fun since it pits you directly against a friend of yours in a shoot-out, but in my experience I found that any slight disparity in skill quickly translated into short matches. The cartridge also has a mission mode, which is what you’d expect imposing restrictions on levels to add an immense amount of challenge for players still hungry after the arcade mode is complete. The last two inclusions are a bit odd, but I’d be hard pressed to argue against their inclusion. One is an alarm clock, and the other is called “relax mode”, in other words, “shoot fireworks for fun mode”. My only gripe with the level of content is that it’s all locked upon purchase, and while it’s fun to play through the arcade mode to unlock it, it’s something I feel needn’t be done.

Big Bang Mini is highly recommendable with its great controls and gameplay, unique presentation, and a wealth of content. All of this for a budget price makes Arkedo’s latest something no DS owner should miss.