Since Patapon 2 just came out, I thought I’d play Patapon 1 to prepare. Patapon won the 2008 best PSP game award from several outlets, and justly so. Seriously, who would have thought that black little eyeballs equipped to the teeth with axes, spears, bows, arrows, and oddly, tubas would be so much fun to control? So all props goes to Japan Studios for their imaginative little jewel, however strange it may be. However, the amount of new and silly-sounding words is also a product of their imagination, so please bear with me. 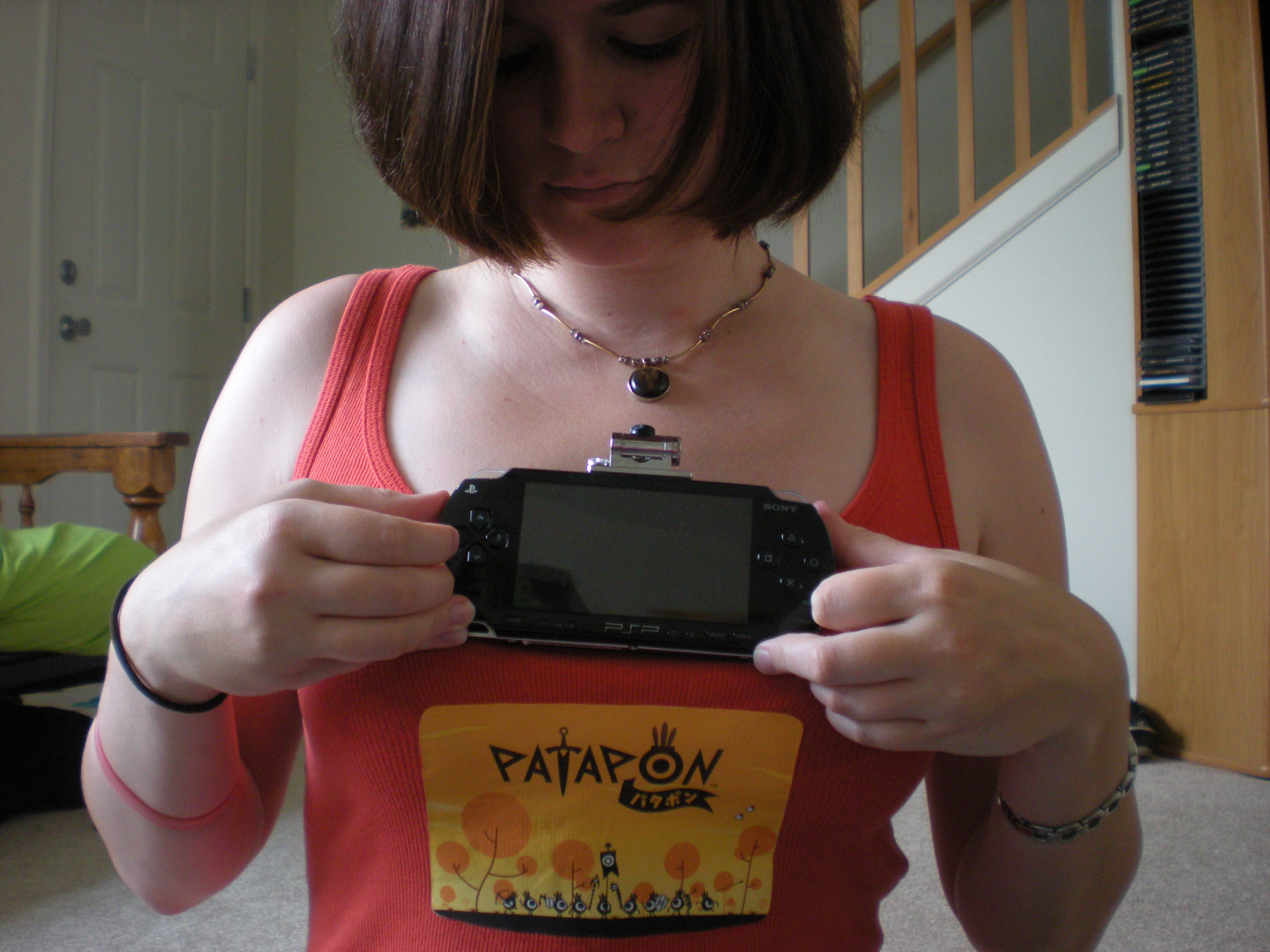 As I said, we have little eyeballs armed and ready to attack. You start by signing a piece of parchment swearing to protect the eyeballs, hereafter known (and actually known) as Patapons.  The way to move the Patapons is by pressing combinations of the face buttons.  Different patterns produce different actions, such as marching forward, attacking, defending, retreating, etc. The first few levels have you discovering the different class types of Patapons and killing a few Zigatons, (i.e. weak bad guys that look just like the Patapons except red). You also learn to hunt and the best way to use the different Patapon types at your disposal. Eventually, you fight bosses, harder Zigatons and their generals who wear silly hats, and giant windmills.  They get harder and harder as you go, in your quest for Earthend, Patapon heaven.

For class types, we have a range from spear-wielding hunters to what appears to be a marching band of tubas (ooo, dangerous).  You can only fight with three groups at a time.  Tatepons have axes.  I like having these in most attacks because you’re allowed to have a lot of them.  But they don’t hunt well, and often don’t retreat very far, making them very vulnerable, and I’ve yet to find any sort of intelligence booster.  Dekapons are basically big and slow Tatepons with clubs.  I never use these unless I simply cannot beat the level any other way.  Yaripons and Yumipons have spears and bows and arrows, respectively.  I use the Yumipons no matter what.  They’re simply awesome and during fever mode they’re pretty much unstoppable. Kibapons have horses, but are sadly also useless. Megapons on the other hand have giant tubas, which send out loud noises that apparently does more damage than any other weapon.  So the key for instant Patapon success = Tatepons, Yumipons, and Megapons. 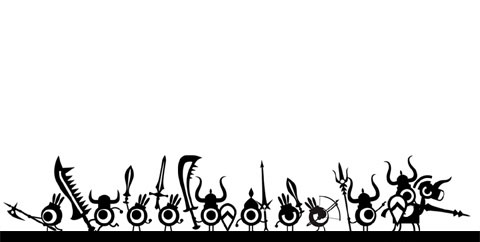 I am completely addicted to this game (yes, I know, and all others I review).  I beat it in several weeks last summer because I could not put the PSP down; it was so compelling, and way too easy to restart.  If they want us to play the game over a longer period of time, it needs to be harder to restart a failed level.  I’m in the middle of playing Patapon right now, and it was very difficult to wrench my thumbs from the PSP and type this article.  It’s just so easy to press “restart”.  *Sigh*.  I really like how the controls help an inexperienced gamer familiarize themselves with the face buttons.  Similar to Parappa the Rapper, except you don’t attack anything but noodles and rappers in Parappa the Rapper, where in Patapon, you attack pretty much everything.

The level ranges from extremely easy to only beatable using a YouTube demo and a cheat code.  And the great thing is that it does not start easy and get harder. The difficulty of the levels is completely random. I really like that feature because it keeps you playing and keeps your morale up. I never did feel like my level was impossible and the next one even harder, so why bother trying? Instead you keep playing, because you know it’s downhill on the other side. A nice deviation from conventional video games.

Gameplay is very simple. All you do is repeat the rhythms. The beat is always the same, you just have to have a very steady thumb.  It does seem boring, and can get a little monotonous if you are just marching forward with nothing in view, but if you are attacking, you can at least watch the progress.  Especially if your thumb is particularly steady, you’ve worked up a fever and you can stop concentrating so intently on keeping the beat.  If you miss the beat, you are greeted with angry eyes and speech bubbles of anger from the Patapons.

There seems to be a sort of spiritual theme running through this game.  Although it is about the god of the Patapons leading them to ultimate paradise, there is a Queen Kharma, Juju, and Divine stews, which boost your morale, which in effect makes you fight better. Oddly enough, Queen Kharma is a bad guy (girl?) who rains down poisonous dandruff on the poor Patapons.  But the High Priestess, the sacrificial altars, and the Tree of Life make the story seem to be a simplified version of religious differences between the Patapons and Zigatons. 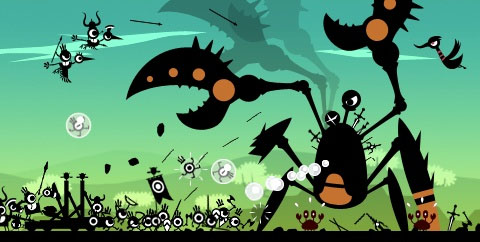 The one part I really do not care for is the Invoking of the Juju.  True, we are little eyeballs who are lead by their god beating a drum, but Juju seems a little fluffy to me.  Also, it completely disrupts your fever.  You have to get to a fever to use the Jujus, which is hard enough sometimes while fighting the enemies, and then you punch out the beat for the Juju and the Patapons to do their little rain or wind dance.  And when you finish the raindance, your fever is gone.  And since you use the Juju for perilous situations, you are usually screwed.

Apart from that, a great game.  I would definitely say that Patapon alone is worth getting a PSP for if you don’t have one already, and the sequel games and prospects for similar games is something I am really looking forward to.  I would say that I have spent at least several days worth of Patapon, so I got my $20 worth.  So fork over money for this one, or at least borrow it from someone.  This is a game that anyone can enjoy.

About the Author: Rachel Phillips is an Elder-Geek who currently attends Grand Valley State University. She is in her final year of Elementary Education with a dual major in Integrated sciences and English Language Arts. Rachel is a self identified classic “Gamer’s Girlfriend” who started off with more fun casual games, and has gradually progressed to the more hardcore world of Geekdom. She is also a living breathing Tolkien Encyclopedia and has read each of the Lord of the Rings books at least ten times. Go ahead and try to stump her, you can’t. This is her third article for Elder-Geek.com.