It is without a doubt that in the last 20 years of gaming, the progress in gaming technology has allowed for the impossible to become near reality, especially with regards to the recreation of events in different periods of history. Many historical themes and events have become focal points and objects of fascination espoused in popular titles such as the old classic Medal of Honor series to the recent Call of Duty series. The resurrection of battles fought and large-scale conflicts allow gamers to experience and relive history for themselves and even go as far as to allow them to rewrite it resulting in alternative outcomes.
Even though the new breakthrough technology has allowed a wider scope of endless possibilities, there are certain other aspects of history that developers try to incorporate into these realistic scenes of battle. Of course the addition of explosions, the mangling of body parts and spurts of blood add to the realism. However, to make a game historically accurate usually depends on the amount of research and determination that game developers invest in from the initial planning to the release of the finished product. To make a game historically satisfying, especially to those gamers who are war buffs, requires the 4-As, which make or break the game’s historical legitimacy:

Attention-grabbing means exactly what it says. The game must be able to grab the gamer’s attention almost instantaneously. It does not necessarily have to begin with a huge explosion. The game must be able to keep people seated and engaged instead of lecturing us as if we were in that certain old geezer’s 8 am lecture on how Europeans brought small pox to America. Rather than listen to a story, let us actually infect some people!

Aesthetics is straightforward. When you play a historical game, you want to be able to feel like you’re in that particular time period. Whether it is a medieval market in a medieval city or a bunker overlooking Omaha beach, aesthetics plays a crucial role in the success of a historically accurate game.

Authenticity is another crucial piece to a historically accurate game. Whether it is the uniform of a soldier in combat or the simple, but useful hidden blade of a medieval assassin, the attention to detail that is paid to these tools, enhances its historical legitimacy.

The most important piece to a historical game is, of course, the accuracy of the historical background. Although dates and names do not seem important, they play a big role in story development and establishing credibility within the larger scope of the historical context that the game is supposedly taking place.

With these four elements listed, I will analyze how historical games of the past, present, and future really measure up to the sands of time.

It is a sunny, clear and warm day on 7 December 1941 in Pearl Harbor, Hawaii. Officers and sailors alike are enjoying the beautiful day on the decks of their ships reading the newspaper or playing cards. All of a sudden, the thundering rumble of planes dampened the sounds of laughter and conversation followed by a huge explosion. The rising sun on the planes made it clear as to who initiated the attack. This day of infamy cost the lives of 3,000 Americans. The Second World War had begun. 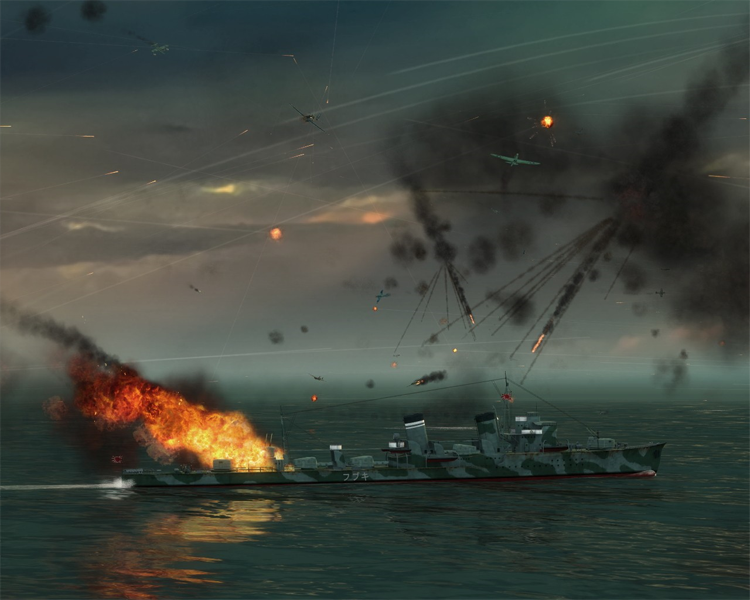 In 2006, World War II gaming on the console evolved dramatically from the traditional action-packed First-Person shooter represented by such epic, household titles as Medal of Honor and Call of Duty to a fusion of elements of this genre plus the elements of Real-Time strategy, which we would associate with PC gaming. Battlestations: Midway recreates the Pacific theater of World War II from the Japanese attack on Pearl Harbor to the climactic showdown between Japan and the United States at Midway. The game offers more of an emphasis on operational strategic gameplay on a wide scale, but at the same time, it allows for players to jump into the hotseat of the action, whether it is directing artillery fire from a large battleship or controlling the outcome of individual dogfights between fighters in the air.

Midway is definitely 3-dimentional warfare at its intensity. The game really challenges the player to make important decisions that could decide the outcome of a battle as well as life and death similar to a captain on the bridge of an aircraft carrier faced with a combined air and submarine attack. Starting from the opening mission, the game takes off at full speed with the defense of Pearl Harbor from the perspective of a PT boat and a P-40 Warhawk. In view of the fact that Battlestations: Midway is a game representing one of the greatest conflicts in history, it is time to analyze how it measures with regards to accuracy in historical emulation.

It is without a doubt that there are no shortages of historical content in Battlestations: Midway. Although nominally an RTS game, Midway is able to grasp attention from the start of the game by effectively fusing the strategic aspect with features of shooters. Instead of restricting you to watching the action unfold from the backseat and playing armchair admiral, the game encourages you to directly command ships and planes from the front seat at pivotal points of battles. Even if there is a lull in fighting in one part of the battlefield, there is never a dearth of action for players. Just like a commander of a ship, players must be wary of the fog of war and the surprises that lay in the vast blue horizon.

The aesthetics of the game are, for the most part, very simple. The waters of the Pacific are crystal clear and waves are noticeable as ships are cruising. While piloting a submarine to its most extreme depths, you can lose track of what direction it is taking as it becomes very dark as it would most likely be. The skies are beautiful as you are flying through the cloud-cover. The topography of the various Pacific islands that are encountered in a few missions is drawn to scale based on the maps of the period including the positions of anti-air batteries, airfields, and naval facilities.

The most notable aspect of this unique game is its attention to authenticity. In addition to being an epic action game, Midway also includes an educational element that acquaints gamers with the history of the vast arsenal employed by the Japanese and the Allied navies. In its extra features, the game includes a database of the different classes of ships, airplanes, and weapons utilized by both combatants. This allows gamers to understand the unique strengths and weaknesses of each type of equipment and how to best utilize their advantages in combat. The realistic interpretation of the weapons employed in the game is remarkable in its realism. The artillery from the big battleships to the small destroyers varies in range as well as caliber. Despite that, a well placed shell at the magazine could send the biggest of ships to the bottom of the sea. Timing plays a crucial role in effective combat such as deciding when and where to place a deadly torpedo screen. 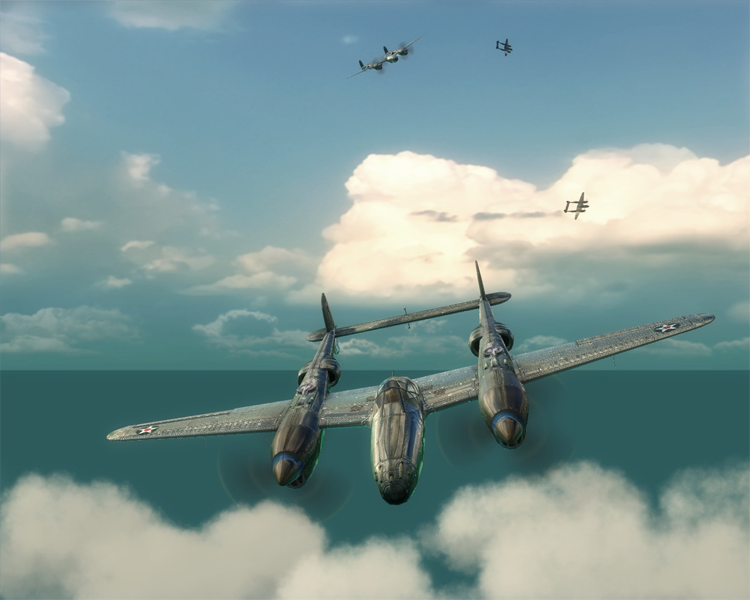 As mentioned before, the classes of navy ships represented in the game are based on actual photographs and records. The identification numbers on the side of the hulls of the U.S. navy ships shows how meticulously researched this game is. In addition to the small destroyers and cruisers that are rarely heard of, the famous dominant aircraft carriers of the U.S. and Japan play a major role in Midway. In fact, the right balance of planes – a dive bomb/torpedo squadron with ample fighter support or vice versa – could effectively tip a sea battle despite the opponent’s superiority in big guns. Midway stresses the point that air dominance was and is essential to victory on land and sea. As was seen in the battle of Midway, the U.S. navy caught Japanese carriers by surprise while they were in the process of refueling and rearming their planes. This spelled disaster. This also applies to the wide assortment of planes from the accuracy of their arsenals to the actual handling. These features lend credence to authenticity.

The final piece that supplements Midway’s historical credibility is its accuracy in historical background. Although the storyline follows the exploits of a fictional character, the chronology of operations is indisputable. In each mission, the main unit that you control is the actual unit that was involved in the operation. Lt. John F. Kennedy even makes a fictional cameo appearance with the famous PT-109 in a mission to assist in the defense of the Philippines. JFK was actually in command of PT-109 in 1943 during the Guadalcanal campaign, one year after Midway.

There are other minor discrepancies. For instance, although not major, there are two missions which involved the sinking of two Japanese battleships that were not sunk until late in the war. Despite this, the fact is that Battlestations: Midway provides a unique first-hand experience into the Pacific theater in its early stages of World War II climaxing with the showdown at Midway. With a combination of thorough research and use of special effects, the developers at Eidos have created a game that honors those sailors and marines who fought to defend their country against a powerful and determined foe. Even though Henry Walker is a fictional character within this real historical conflict, his actions throughout the progression of the game represent obstacles that naval officers faced in the early, uncertain years of the Pacific war. The Japanese navy was still a formidable force and the U.S. navy was still trying to regroup after Pearl Harbor. However, their determination and bravery eventually helped to overcome these challenges and defeat the enemy.

The opinions expressed in this commentary are solely those of Patrick Feng.